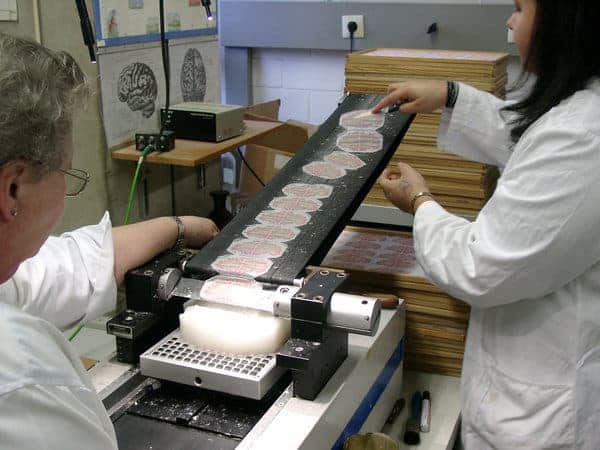 Scientists have striven for years to comprehend the complicated neurological mechanisms that underline the human brain and consciousness. Besides the philosophical aspects of such a quest (how we do think? what is consciousness born?), a better understanding of the human brain will help solve a number of medical issues that currently plague the human brain. A new step forward in this direction has recently been made by researchers from Germany and Canada who recently released a new 3D map of the human brain, called BigBrain, that is 50 times more detailed than any previous version.

Previous versions relied on MRI imaging to map the brain, however these were limited by the MRI’s resolution which was about one millimeter. The current version has a resolution of under 20 microns, or thinner than a human hair. As you can imagine, however, this was no easy task to tackle but the researchers performed wonderfully and their painstaking efforts eventually paid off.

“The quality of those maps is analogous to what cartographers of the Earth offered as their best versions back in the seventeenth century,” says David Van Essen, a neurobiologist at Washington University in St Louis, Missouri, who was not involved in the study

BigBrain was built from one person—a deceased 65-year-old woman— whose brain was cut into tiny transverse sections, after the brain was subsequently  scanned using a magnetic resonance scanner then imbedded into paraffin. No less than 7,400 sections were made, each of which was then imaged, refined to remove anomalies and then reconstructed to build the final 3D image. Imaging the sections by microscope took a combined 1,000 hours and generated 1 trillion bytes of data

Mapping the brain: we’re only scratching the surface

The map is just an atlas, however – it does not reveal gene expression differences or brain connectivity as in the other major ongoing projects. This doesn’t make it less valuable, though, since it will definitely help researchers all over the institute coordinate and correlate their efforts.

“This completely changes the game in terms of our ability to discriminate very fine structural and physiological properties of the human brain,” said study co-author Alan Evans, a neurologist at the Montreal Neurological Institute at McGill University in Canada, at a press conference on 19 June.

BigBrain might have not ever seen the light of day were it not for the European Human Brain Project, a massive  collaborative project which involves 80 institutions and which seeks to map the connections of the human brain, and eventually simulate an entire brain digitally. The Human Brain Project was funded earlier in 2013, receiving a staggering one billion Euros over 10 years from the European Commission. Overseas, in the US, the Obama Administration launched the BRAIN Initiative—or Brain Research through Advancing Innovative Neurotechnologies – which seeks to chart the activity of each of the 100 billion neurons in the human brain. The BRAIN Initiative has so far secured $250 million in funding. Combined, the two projects will most likely return with fascinating results that will further our understanding of the brain.

The researchers describe their results today in Science, and will make the full data set publicly available online.