Dr. Sanjay Gupta is an established neurosurgeon, but you all might know him better as CNN’s chief medical correspondent through the various live interventions he’s had along the years on television as well as some feature documentaries. Last night, his most recent documentary, called “WEED”, premiered on CNN as you might have already guessed, it’s all about marijuana and its medicinal potential. 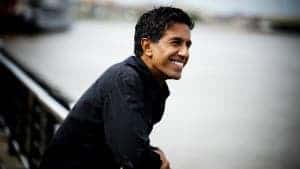 Two things come off as rather surprising from the very get go. One, the CNN-produced documentary, despite being objective enough portraying marijuana from both sides of the fence, is clearly pro-marijuana for medicinal use, offering a number of examples of clinical cases where marijuana treated patients when everything else failed. This is something that we rarely get to see in mainstream media. Second, Gupta himself is now a reformed pro medical use marijuana advocate – until recently, he actually actively sought to discredit marijuana use.

“Well, I am here to apologize,” writes Gupta in a recent editorial for CNN, where he talked about WEED and some of his findings during the research for the documentary.

“I apologize because I didn’t look hard enough, until now. I didn’t look far enough. I didn’t review papers from smaller labs in other countries doing some remarkable research, and I was too dismissive of the loud chorus of legitimate patients whose symptoms improved on cannabis.”

For his documentary, Gupta feverishly sorted through thousands of marijuana related studies. According to him, the U.S. National Library of Medicine  pulled up nearly 20,000 more recent papers (post 1930’s/1940’s). What startled him was that the majority of these papers were focused on the harms of marijuana (addiction, lung cancer, bad trips etc.), and only 6% of them actually investigated its medical potential.

Weed: evil or good. Just study it and find out!

In today’s context, this is rather worrisome. In the US, and other parts of the world as well, much talk has been made around marijuana dispensaries – whether these should be allowed in other states, whether it actually works, so on and so forth. Considering the significant lack of studies and clinical trials, however, these discussions become more or less intractable until significant and reliable data can be gathered. Data following clinical use of marijuana would settle such interminable discussions as it would offer the necessary scientific framework through which palpable conclusions could be drawn.

Here’s the problem though, one that Gupta highlights both in his article and recent documentary, “WEED”, namely you can’t make any science on marijuana. Why not? Well you first need to get it (dealers don’t count) and be approved by a number of government agencies (FDA, DEA etc.), then go through a cumbersome bureaucratic process.

“It doesn’t have a high potential for abuse, and there are very legitimate medical applications. In fact, sometimes marijuana is the only thing that works,” he wrote. “We have been terribly and systematically misled for nearly 70 years in the United States, and I apologize for my own role in that.”

Marijuana is currently classified as a Schedule I substance by the federal government, meaning according to the government, not only does it have no medical value , but is put on the same wagon with substances like cocaine or heroin.

“With 20 states already approving it, I think advocacy has already been demonstrated,” Lyle Craker, a horticulturist who directs the Medicinal Plant Program at the University of Massachusetts Amherst, told PopularScience.com

No matter how many states approve marijuana, it still won’t make a difference since marijuana is illegal federally which means you can’t have clinical trials on humans, nor access funds, unless you get specific approval from government bodies. Craker has been trying for many years to appeal to government agencies to rethink their view on medical marijuana. For the past decade he has been trying, in association with the Multidisciplinary Association For Psychedelic Studies (MAPS), a nonprofit that sponsors medical research into the therapeutic properties of psychedelics and marijuana,  to establish a research farm to grow marijuana for medical researchers, only to be denied repeatedly by federal authorities.

As specified earlier, you can’t get your marijuana for research use from a local dealer, that would be illegal. Here’s the ironic and, at the same time, horrendous part. In all likelihood, in a 10 mile radius from any major medical research institute it’s likely you’ll find someone who sells pot, but as a researcher, even if you get your research funded and approved, your work’s cut out for you.

“As far as federally approved research, nothing is going on that I’m aware of, except for Mississippi [where the National Institute on Drug Abuse grows marijuana for its research] and a study going on in California,” Craker said.

“Scientists can get research marijuana from a special farm in Mississippi, which is astonishingly located in the middle of the Ole Miss campus, but it is challenging. When I visited this year, there was no marijuana being grown,” wrote Gupta.

For a period of 11 years, the state of California funded clinical research into medical marijuana through theCenter for Medicinal Cannabis Research at the University of California, San Diego. There, a series of small human trials found cannabis to be effective in treating pain in patients with multiple sclerosis and HIV.

“Obviously it can be done,” says Igor Grant, a professor at UCSD and the center’s director. “We’ve conducted the studies, but I think an ordinary researcher without the support of the state would be hard pressed to do it. It’s just a difficult and cumbersome process.”

For now, the Center for Medicinal Cannabis Research has put its experimental work on hold indefinitely. “We would like to in the future seek federal support,” Grant says, “but at this time I think the federal position is not really supportive of this kind of endeavor.”

Elsewhere, in countries like Spain and Israel, politics are being revised such that proper research may assert the medical properties of marijuana. Some of work so far has been investigating properties such as the  anti-cancer effects of marijuana or the ability to  alleviate symptoms of PTSD.

Weed: not all that safe, still not researched enough

Of course, weed’s not all shine and wonder. Gupta talks in his documentary about certain downsides to marijuana consumption, from addiction (9% addiction among users, compared to 20% for cocaine users and 25% for heroin users) to psychological and physiological disorders (panic attacks, anxiousness, inability to concentrate, loss of short term memory), to right down brain damage. The latter might seem startling, but during his investigations, Gupta found studies and talked to physicians who claim that marijuana use under the age of 16 hampers brain development – just like any other psychoactive substance for that matter. Alcohol is far worse in this sense.

With this in mind, parents and the general public alike should pay particular attention in the matter and ought to get involved in what truly means marijuana regulations. According to Gupta, some 30% of high school students (no pun intended) are smoking cannabis. Were they to be informed on the potential damage they might subject themselves to, during this period of brain development, many of them might not try it until they reach a proper, responsible age. For that matter, actually, there are millions of people through out the US, young and old, who smoke regularly marijuana. Despite this, we don’t fully know how it affects people, good or bad, because the government is being too restrictive about it.

There’s not one single case of reported death from marijuana overdose or related consumption. Since it doesn’t kill you or cause any obvious kind of major damage, the government most likely doesn’t see an urgent need into extensively studying marijuana’s properties using the scientific method. Not nearly enough at least, considering the sheer number of consumers in the country and through the world for that matter. And that’s just irresponsible.

For e-mail and rss subscribers, “WEED”  – the documentary – can be viewed by accessing this web page in your browser. There’s an embedded video.