Using a chemical technique, researchers removed the complex organic polymers that give wood its characteristic appearance and, in the process, made the wood transparent. The see-through wood was then imbued with epoxy which made the material stronger than glass.

Earlier this year, ZME Science reported how a group from Sweden made optically transparent wood. The researchers at University of Maryland used a very similar method as their Swedish colleagues, with a couple of notable differences.

First, the lignin is removed from the wood through boiling in a chemical bath for several hours. With the lignin extracted, the woody material became transparent. Epoxy was then poured over to make the wood four to five times stronger, as reported in Advanced Materials.

At this point, you might be wondering what’s the point of making wood transparent. Well, wood is a great material because of its mechanical properties, created by its structure and the interactions between cellulose, hemicelluloses and lignin. In electronics,  abundant cellulose nanoﬁbers (CNF) and cellulose nanocrystals extracted from wood are highly sought for due to their desirable optical properties. 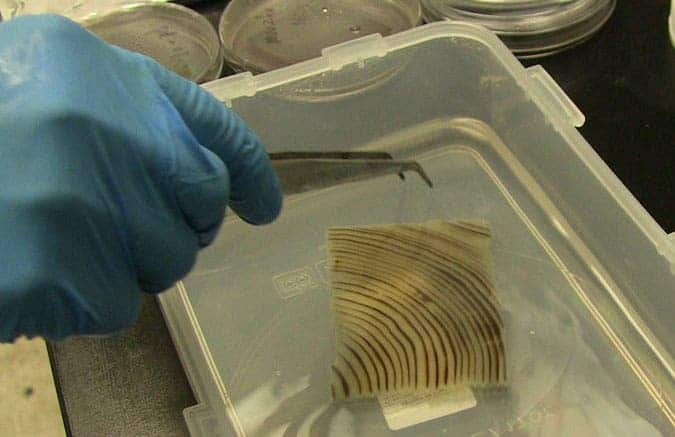 The wood was boiled in water, sodium hydroxide and other chemicals. Credit: Advanced Materials

What’s really interesting about transparent wood is that the material retains the micro-channels used to shuttle nutrients when it was a tree. This creates a waveguide effect which lets more light in. Traditional glass scatters light.

The applications could be really huge, ranging from really cool see-through furniture, to high-tech optical lab equipment. Before this happens, though, the researchers need to figure a way to scale the process because right now they can’t use the method to make transparent blocks larger than five-by-five inches.

2 thoughts on “This transparent wood is stronger than glass”