Researchers from Columbia Engineering and the Georgia Institute of Technology report the first experimental proof of piezoelectricity and the piezotronic effect in an atomically thin material, molybdenum disulfide (MoS2). This makes it the thinnest electrical generator in the world. The resulting generator is optically transparent, extremely light weight, as well as very bendable and stretchable. In the future, such generators could be used to power extremely tiny devices harnessing energy from the environment, be them remote sensors or nanotech that travels through your bloodstream. 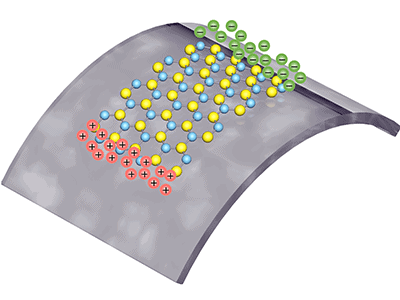 Positive and negative polarized charges are squeezed from a single layer of atoms, as it is being stretched.
—Image courtesy of Lei Wang/Columbia Engineering

Piezoelectricity is a well documented form of energy conversion  in which stretching or compressing a material causes it to generate an electrical voltage, or viceversa — an electrical current is applied to cause expansion or contraction in a material. This effect has been harnessed for various applications, some more practical than others, like a notebook that can be powered by typing (a piezoelectric transducer converts the pressure used to press the keys into electricity). This is the first time, however, that piezoelectricity has been demonstrated at the scale of only a few atoms of thickness.

“This material—just a single layer of atoms—could be made as a wearable device, perhaps integrated into clothing, to convert energy from your body movement to electricity and power wearable sensors or medical devices, or perhaps supply enough energy to charge your cell phone in your pocket,” says James Hone, professor of mechanical engineering at Columbia and co-leader of the research.

“Proof of the piezoelectric effect and piezotronic effect adds new functionalities to these two-dimensional materials,” says Zhong Lin Wang, Regents’ Professor in Georgia Tech’s School of Materials Science and Engineering and a co-leader of the research. “The materials community is excited about molybdenum disulfide, and demonstrating the piezoelectric effect in it adds a new facet to the material.” 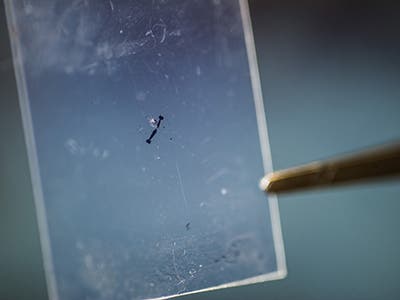 An atomically thin material, molybdenum disulfide (MoS2), shown, could be the basis for unique electric generator and mechanosensation devices that are optically transparent, extremely light, and very bendable and stretchable.
—Image courtesy of Rob Felt/Georgia Tech

You might remember Hone as being part of a research group that proved in 2008 that graphene — a 2-D form of carbon arranged in a hexagon geometry — is the strongest material in the world. Since then, Hone and colleagues have been exploring the novel properties of 2D materials like graphene and MoS2 as they are stretched and compressed.

Because MoS2 is highly polar, an even number of layers cancels out the piezoelectric effect, so if the material is to be effective at generating current an odd number of layers need to be used and flexed in the proper direction. The fact that  the material’s crystalline structure also is piezoelectric in only certain crystalline orientations made matters even more challenging.

Hone’s team placed thin flakes of MoS2 on flexible plastic substrates, then  patterned metal electrodes onto the flakes.  Wang’s group installed measurement electrodes on samples provided by Hone’s group, then measured current flows as the samples were mechanically deformed. As the material was deformed, voltage and current outputs were measured, as seen in the paper published in Nature.

“This is the first experimental work in this area and is an elegant example of how the world becomes different when the size of material shrinks to the scale of a single atom,” Hone adds. “With what we’re learning, we’re eager to build useful devices for all kinds of applications.”

A single monolayer flake strained by 0.53% generates a peak output of 15 mV and 20 pA, corresponding to a power density of 2 mW m−2 and a 5.08% mechanical-to-electrical energy conversion efficiency. Of course, for most applications this sort of power output is useless, but even a few milliwatts of power can sustain tiny micrometer devices. This study also reveals the piezotronic effect in two-dimensional materials for the first time and considering MoS2 is just one of a group of 2D semiconducting materials known as transition metal dichalcogenides, there’s no telling what kind of breakthrough can be achieved in the future once more materials are probed for piezoelectricity.