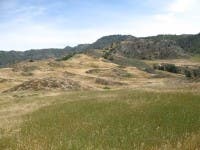 Native plants on a California reserve (in bloom on mounds in background) are found in marginal, patchy habitats following invasion by exotic grasses (in green in foreground). Ecologists at the University of Toronto and ETH Zurich have found that, given time, invading exotic plants will likely eliminate native plants growing in the wild despite recent reports to the contrary. (c) James Cornwell

Researchers at  University of Toronto and the Swiss Federal Institute of Technology Zurich (ETH Zurich) have recently published a paper that claims exotic plant species do indeed eliminate native plants from the wildlife ecosystem, contrary to previous reports that found the threat unreal.

The ecologists argue that reports heralding invasive plants as non threatening are based on incomplete information, since not enough observational time had been granted. The researchers claim the impact invasive plants has on a native ecosystem isn’t felt immediately and requires some time before they dominate the habitat – a steady but sure fact.

“The impacts of exotic plant invasions often take much longer to become evident than previously thought,” says Benjamin Gilbert of U of T’s Department of Ecology & Evolutionary Biology (EEB) and lead author of the study. “This delay can create an ‘extinction debt’ in native plant species, meaning that these species are slowly going extinct but the actual extinction event occurs hundreds of years after the initial invasion.”

The whole conundrum comes from the fact that very few species have been found to become extinct as a result of exotic species. What happens, however, is that often native plants are moved out and forced to survive in  patchy, marginal habitats unsuitable to their nonnative competitors.

The researchers visited the California reserve, a well known ecosystem to ecologists where the remaining native plant diversity can only be found in the marginal areas surrounding non-native plants. After performing experiments and gathering data, the scientists performed a quantitative model in order to determine what long term impact invasive plant species have on the local ones.

“Our research also allows us to identify how new habitats for native flora could be created that would prevent extinction from happening. These habitats would still be too marginal for invaders, but placed in such a way as to create ‘bridges’ to other habitat patches,” says Gilbert.

Findings were reported in the journal PNAS.