In an amazing breakthrough, scientists at Ludwig-Maximilians-Universität (LMU) have for the first time demonstrated an extremely appealing, yet still obscure concept – intelligent molecules. By definition intelligence is the ability to learn and understand or deal with new situation and the latter is exactly what the researchers’ polymer molecules can do, namely  react to external stimuli and reversibly change their shape.

The applications for such a smart molecule could be numerous. For instance, as nanoswitches: hot-cold, light-dark, altered salt concentrations or some other stimuli factors could be toggled or switched, in the process becoming stimulus generator by itself. Also, these could also be used in biosensors, drugs, chromatography procedures, and other applications, the researchers suggest. 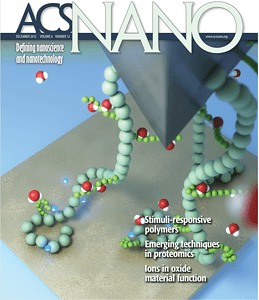 The paper detailing the “intelligent molecule” research has been chose as the cover article for ACS Nano, in combination with a 3D graphic of the NIM-media designer. (c) ACS Nano

The physicists demonstrated the concept by successfully making a reaction with a single polymer molecule visible for the first time. The researchers engineered a synthesized polymer which they then placed on a gold surface, very carefully, with an atomic force microscope (AFM). One of the ends of the polymer adhered to the surface, while the other to the tip of the AFM. Once the scientists increased the salt concentration of the surrounding medium, they were able to observe how the molecule collapsed gradually. Back in a weak salt solution, the molecule unfolds again

“We have observed both processes in our study for the first time for a single polymer molecule,” write the researchers.

The findings were reported in the journal ACS Nano.