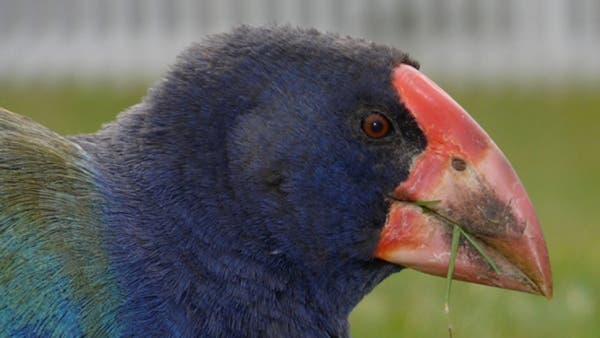 The Takahe is a flightless bird that was previously thought to be extinct in New Zealand until it was discovered in the 1950s in a remote region of the South Island.(c) Tim Blackburn

A new study sheds new light on the impact humans had on the local aviary fauna in the Pacific, after the authors conclude that human colonization of the Pacific Islands is the main driving factor that wiped out some 1,300 bird species in the area or roughly 10% of the entire bird population on the planet.

The study also shows that winged birds were 30 times far more likely to survive colonization, and larger birds went extinct far more often, demonstrating the the main cause for extinction was hunting, along with habitat destruction. One might want to remember the  dodo and Sylviornis; huge flightless birds, which weighed about 66 pounds (30 kilograms) and that were wiped out within a few mere years.

Previous estimates of human impact on Pacific bird extinction ranged 800 to up to 2000 bird species, however this most recent research by the team of scientists, lead by Professor Richard Duncan of the Institute for Applied Ecology at the University of Canberra, is the first to provide an accurate snapshot.

According to Duncan, incomplete fossils records have been hampering research efforts concerning human settlement impacts on the local biosphere.

“Consequently, many extinct bird species remain to be discovered, confounding attempts to quantify more precisely the number and type of species lost across the region,” write Duncan and colleagues Dr Alison Boyer from the University of Tennessee and Tim Blackburn, of London’s Institute of Zoology.

To estimate the toll taken by the Pacific birds, the researchers devised a mathematical model that analyzed bird species on 41 different Pacific Islands. A total of 618 populations of 193 nonpasserine landbirds were identified on the 41 islands, comprising 371 populations present at the time of European contact and 247 populations known only as fossils. In total some 1,300 bird species went extinct in the Pacific islands between 3,500 to 700 years ago.

The present study seems to substantiate recent claims that suggest bird populations around the world are plummeting.  A report released in late 2012 found bird populations in the U.K. declining to near record lows, as it was found that there were 44 million fewer birds in 2012 than in 1966, a rate of decine of one nesting pair every minute for almost 50 years.

Findings were published in the journal Proceedings of the National Academy of Sciences,