You may have thought things like currency or money are concepts known solely to humans. While it’s true some animals might have a sense of ownership, trading resources and the likes haven’t been observed in any other species besides Homo sapiens. However, in 2005, an economist/psychologist duo from Yale University managed to teach seven capuchin monkeys how to use money. The study went into some unexpected territory not long after. 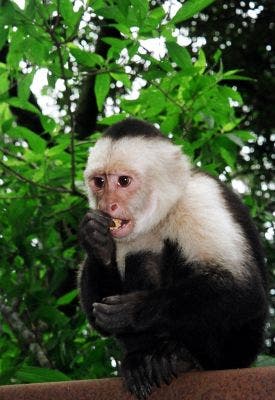 “The capuchin has a small brain, and it’s pretty much focused on food and sex,” said Keith Chen, a Yale economist who along with Laurie Santos, a psychologist, are the two researchers who have had made the study. ”You should really think of a capuchin as a bottomless stomach of want,” Chen says. ”You can feed them marshmallows all day, they’ll throw up and then come back for more.”

It’s exactly these selfish desires that they tried to exploit and experiment with great success after teaching capuchins to buy grapes, apples, and Jell-O. The economist wanted to study the incentives that motivated specimens to behave in a way, while the psychologist analyzed the behavior itself.

Chen’s monkey correlations to human economics go from further back when he was a Harvard graduate, and additionally shows some more interesting facts. At Harvard, he worked with Marc Hauser, a psychologist, on a project which studied altruistic behaviors in cotton-top tamarin.

At first, they put two monkeys in different cages, each with a lever. When the lever was pulled, the neighboring monkey would receive food. If not altruism, it was still a form of cooperation that was put to the test — the typical tamarin pulled the lever about 40 percent of the time.

The most interesting part came after the researchers introduced new behaviors. Now, they trained a monkey to always pull the lever (mindless altruist), and another to never pull it (ego-monkey). The two were then inserted into the game with other monkeys.

At first, the mindless altruist was pulling the lever every time, never missing a chance to deliver food, while the other tamarins responded in the same way 50 percent of the time. The other monkeys soon understood, though, that the mindless altruist was just pulling the lever anyway, regardless of whether it was reciprocated or not – their response then dropped to 30 percent of the time.

The ego-monkey was exposed to the harshest treatment, as expected — very harshly. “[The other tamarins] would just go nuts,” Chen recalls when she was introduced to other monkeys. ”They’d throw their feces at the wall, walk into the corner and sit on their hands, kind of sulk.” 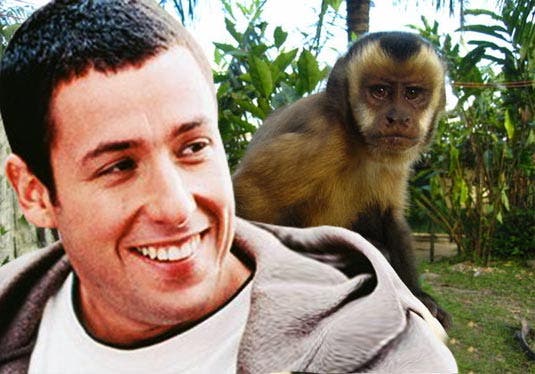 “I bought an Adam Sandler for 7 monkey dollars.”

When Chen and Santos first started their study, they didn’t have a particular goal in mind. It was just as simple as giving a monkey a dollar and see what would happen, which was exactly the case. Instead of the dollar, however, a silver disc with a hole in its center was employed as a means of currency for the capuchins.

It took several months of training for the capuchins to learn that they could exchange such a token for fruit. After they understood this, each monkey was given 12 tokens to decide on how to spend it on food valued at different prices.

Researchers observed that the monkeys could even budget. Researchers then changed the market and put Jell-O at a lower price, to see if monkeys would buy fewer grapes and more Jell-O. They acted exactly like the current laws of economics dictate for humans as well.

They then taught them how to gamble, and saw they made the same irrational decisions a human gambler would make as well. The data generated by the capuchin monkeys, Chen says, ”make them statistically indistinguishable from most stock-market investors.”

The capuchin monkeys understood money, not only used it

But did the capuchins truly understood the value of money or did they just behave mindlessly to receive food? One of the researchers cut circular slices of cucumber, similar to the discs that were handed out to the capuchin as money, and fed them to the monkeys instead of their usual cube-like shape.

One of the monkeys took a slice, chewed a bit on it, and then immediately went to one of the researchers to see if she could buy something tastier with it.

There was stealing too. Not a single monkey saved any of the tokens, but most of them tried to subtract a few more tokens when they were handed out.

The monkeys were given tokens one at a time, which were inserted in a separate chamber from that of their living quarters, but on one occasion everything sprung into chaos when a capuchin tried to make a run for it with a tray filled with tokens. The chaos was intense. That was a tough time for researchers.

Something else happened then too. Grasping the notion of currency simply means you understand that you can exchange money for goods and services. Well, one of the researchers, during the chaotic episode mentioned earlier, observed how one of the monkeys exchanged money with another for sex. After the act was over, the monkey which was paid immediately used it to buy a grape…

There you have it folks, sounds familiar? In almost all aspects, capuchins manage to understand money and use it in a manner not too different from a plain old homo sapiens. The study, titled “How Basic Are Behavioral Biases? Evidence From Capuchin Monkey Trading Behavior“, can be read here.

138 thoughts on “How scientists taught monkeys the concept of money. Not long after, the first prostitute monkey appeared”