An often overlooked aspect of climate change is the migration of the traditionally-viewed climate line that separates the Northern and the Southern hemispheres, as the Northern is becoming warmer than the South. The consequences are deeply rooted, yet poorly studied. A recent study by climatologists from the University of California, Berkeley, and the University of Washington, Seattle, attempts to peer into these consequences and concentrate on one point – tropical rainfall. Their findings suggest a shift in rainfall patterns which is set to effect great landmasses in Asia, Africa and the Americas.

“A key finding is a tendency to shift tropical rainfall northward, which could mean increases in monsoon weather systems in Asia or shifts of the wet season from south to north in Africa and South America,” said UC Berkeley graduate student Andrew R. Friedman, who led the analysis.

“Tropical rainfall likes the warmer hemisphere,” summed up John Chiang, UC Berkeley associate professor of geography and a member of the Berkeley Atmospheric Sciences Center. “As a result, tropical rainfall cares a lot about the temperature difference between the two hemispheres.”

Previously, ZME Science reported on the findings of a state-of-the-art climate chance simulation which suggests green plants could move further north by as much as a whooping 20 degrees latitude by the turn of the century. In the past 30 years alone, southern vegetation has moved up north by seven degrees, turning once pale regions into lush green patches in a very short amount of time. As you might imagine, these shifts over a such a short period of time will not be without consequences to the balance of the ecosystem. 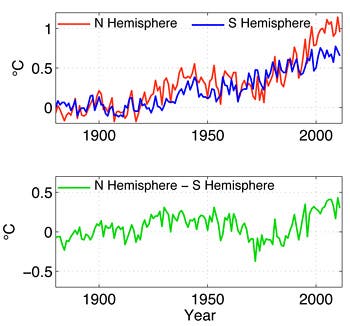 The present study takes a look at how tropical rainfall is effected by the hemisphere shift. It’s important to note that tropical rainfall patterns fall into bands at specific latitudes, such as the Intertropical Convergence Zone. A warmer Norther Hemisphere means that the atmospheric overturning weakens in the north and strengthens in the sound, consequently shifting rain bands northward. The most affected regions by this sift, the researchers claim, will be those in close proximity north and south of the bands.

“It really is these borderline regions that will be most affected, which, not coincidentally, are some of the most vulnerable places: areas like the Sahel where rainfall is variable from year to year and the people tend to be dependent on subsistence agriculture,” said Frierson, associate professor of atmospheric sciences. “We are making major climate changes to the planet and to expect that rainfall patterns would stay the same is very naïve.”

To come to these conclusions, the scientists gathered and analyzed more than 100 years worth of data that related average temperatures differences between the two hemispheres and rainfall together. Upon comparison, the scientists noticed that abrupt changes coincided with rainfall disruptions in the equatorial tropics. They were baffled by the effects the largest temperature difference had – a one-quarter degree Celsius drop in temperature drop in the 1960s – which caused  a 30-year drought in the African Sahel and decreases in the monsoons in East Asia and India.

“If what we see in the last century is true, even small changes in the temperature difference between the Northern and Southern hemispheres could cause measureable changes in tropical rainfall,” Chiang said.

This doesn’t come as the best of news, since climate change models predict  a steadily rising interhemispheric temperature difference through the end of the century. Even the most optimistic ones that consider a significant drop of greenhouse gas emissions in the atmosphere (right now it’s been ever rising for decades), predict about a 1 degree Celsius (2° F) increase in this difference by 2099.

The researchers warrant that while the world on average is warming, it does not happen uniformly. Chiang and his colleagues argue that climate scientists should not only focus on the rising global mean temperature, but also the regional patterns of global warming.

“Global mean temperature is great for detecting climate change, but it is not terribly useful if you want to know what is happening to rainfall over California, for example,” Chiang said. “We think this simple index, interhemispheric temperature, is very relevant on a hemispheric and perhaps regional level. It provides a different perspective on climate change and also highlights the effect of aerosols on weather patterns.”

Findings were reported in a paper published in the Journal of Climate.