Fracking may produce more than shale hydrocarbons, say researchers analyzing the genomes of microorganisms living in these wells. Evidence suggests underground sustainable ecosystems are forming due to this practice, populated in part by a never-before-seen bacteria dubbed “Frackibacter”. 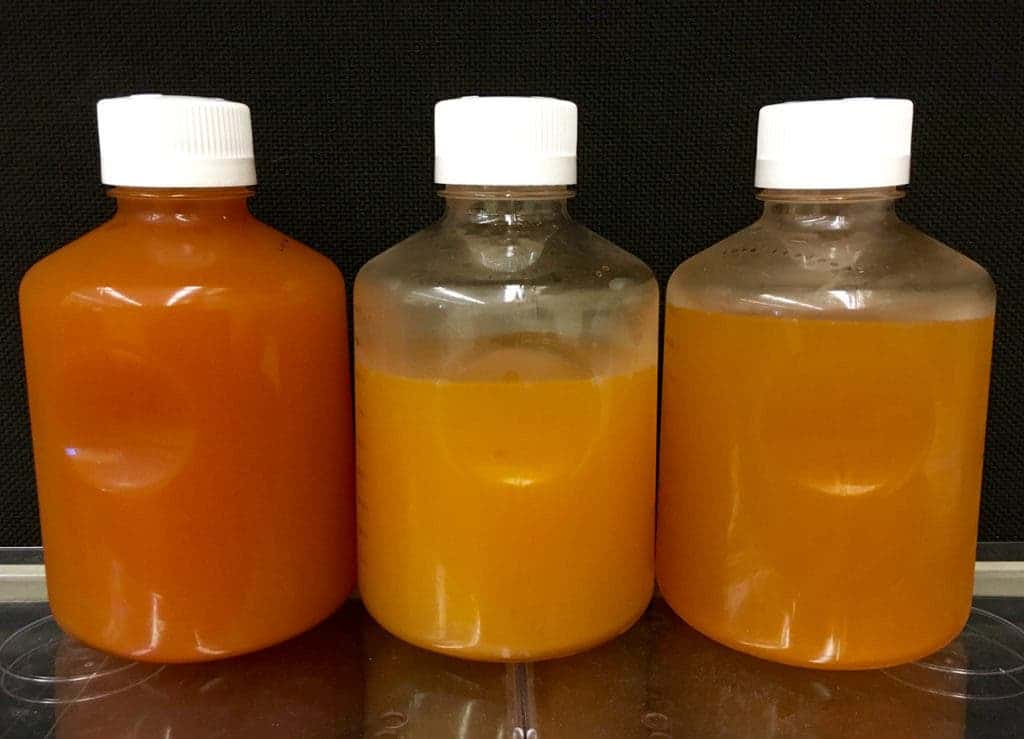 Samples of “produced water fluids” collected at the surface of wells in Macellus and Utica shale formations after fracturing. The fluids are orange because they contain large amounts of iron that oxidizes when brought to the surface. By analyzing the genomes of microbes in the water, the researchers are piecing together the existence of microbial communities inside the wells. Image credits Rebecca Daly / Ohio State University.

Ohio State University researchers report finding the new genus along with 30 microbial members in two separate fracturing wells. Even though they are drilled hundreds of miles apart and into different kinds of shale formations, the microbial communities found inside them were nearly identical, they say. And astonishingly, these little bugs seem to create their own self-sustaining ecosystems inside the wells.

By sampling fluids taken from the two wells over a period of 328 days, the researchers reconstructed the genomes of bacteria and archaea (single-celled organisms) living in the shale. Incredibly, both wells showed nearly identical microbial communities. They’re geologically different (one drilled in Utica shale and the other drilled in Marcellus shale,) they’re formed millions of years apart, are worked by two different companies using their own techniques and fluid mixes, and each formation contains different forms of hydrocarbons. Yet one bacterium, Halanaerobium, emerged to dominate communities in both wells.

“We thought we might get some of the same types of bacteria, but the level of similarity was so high it was striking. That suggests that whatever’s happening in these ecosystems is more influenced by the fracturing than the inherent differences in the shale,” said Kelly Wrighton, assistant professor of microbiology and biophysics at Ohio State.

Most of the microbes identified in the wells are familiar. The team suspects they most likely come from the surface ponds that hold the liquid needed to fill the wells, but they’re not 100 percent sure. One new species was identified only in these two points and may very well be unique to hydraulic fracturing sites — Candidatus Frackibacter. In biological nomenclature, “Candidatus” is affixed to an organism whose genome is being studied for the first time without being isolated in a lab culture. “Frackibacter” is short for hydraulic fracturing bacteria, because even biologists need a giggle sometimes.

Frackibacter seems to prosper alongside the microbes we’ve introduced from the surface, forming communities in both of these wells which have been stable for nearly a year now.

“We think that the microbes in each well may form a self-sustaining ecosystem where they provide their own food sources,” Wrighton said.

“Drilling the well and pumping in fracturing fluid creates the ecosystem, but the microbes adapt to their new environment in a way to sustain the system over long periods.” 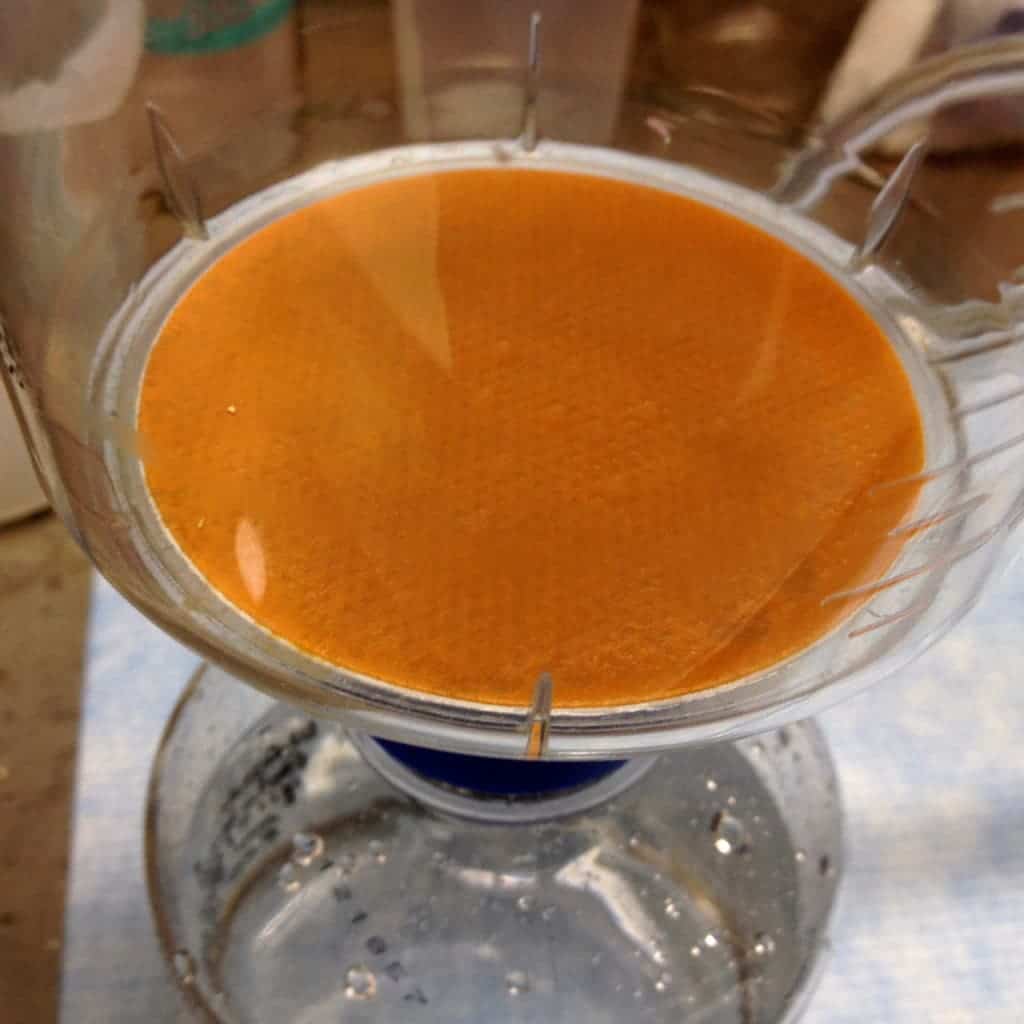 Where the bugs come from is still unclear — while some are almost guaranteed to come from the ponds, other bacteria and archaea could have been living in the rock before drilling began. Candidatus Frackibacter among them.

Energy companies usually mix their own proprietary recipes for the fluid they use in fracking, but basically they all start with water and add other chemicals in various proportions. Once the fluid reaches the shale, it leaches salt from the rocks becoming briny. The microorganisms that live inside shale deposits naturally endure high temperatures, pressure, and salinity. But this salinity is likely the most dangerous stressor acting on the bugs because the huge osmotic pressure it generates wants to suck the water right out of them. So, they synthesize organic compounds called osmoprotectants to keep themselves from bursting.

When they die, the osmoprotectants are released into the water and other microbes feed on or use them to protect themselves. In that way, salinity forced the microbes to generate a sustainable food source. 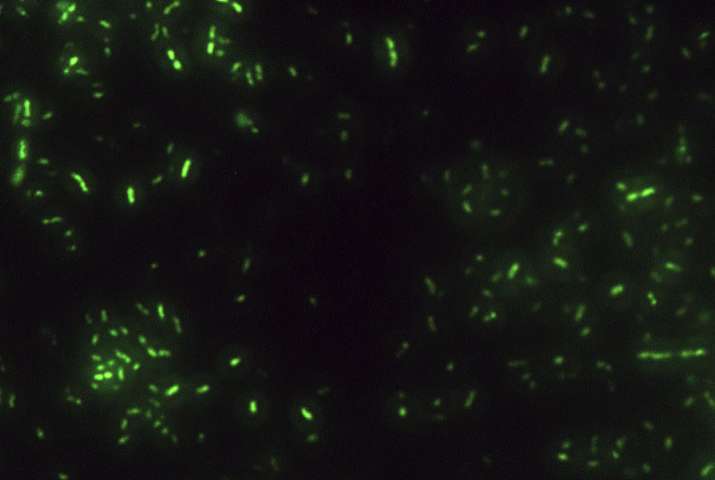 They also have to contend with viruses. The researchers found evidence that some bacteria were falling pray to viruses and releasing their osmoprotectants into the water when they died. By examining the genomes of the different microbes, the researchers found that the osmoprotectants were being consumed by Halanaerobium and Candidatus Frackibacter. In turn, these bacteria provided food for other microbes called methanogens, which ultimately produced methane.

To check their findings, the researchers grew these microbes in a lab under similar conditions. They also produced osmoprotectants that were converted to methane, confirming the team’s theory. One implication of the study is that methane produced by microbes living in shale wells could possibly supplement the wells’ energy output. Wrighton and Daly described the amount of methane produced by the microbes as likely minuscule compared to the amount of oil and gas harvested from the shale even a year after initial fracturing. But there is a precedent in the related industry of coal-bed methane of using microbes to increase yield.

“As the system shifts over time to being less productive, the contribution of biogenic methane could become significantly higher in shale wells. We haven’t gotten to that point yet, but it’s a possibility.”

Co-author Michael Wilkins, assistant professor of earth sciences and microbiology, has used genomics information to grow Candidatus Frackibacter in the lab and is further testing its ability to handle high pressure and salinity.