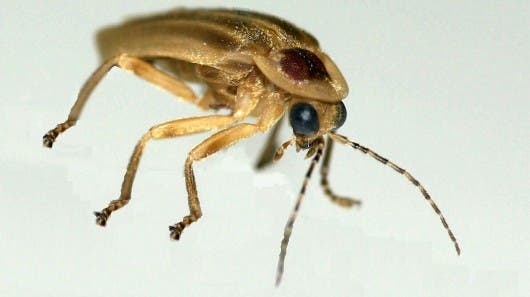 A firefly specimen from the genus Photuris, which is commonly found in Latin America and the United States and served as the inspiration for the effective new LED coating. Credit: Optics Express.

We’ve featured countless research here on ZME Science where important scientific and technological advancements were made after scientists sought inspiration from nature, be them  high-tech surfaces (butterfly) or robots (leaping lizard). Recently, researchers at Canada’s University of Sherbrooke managed to improve LED efficiency by 55% after they applied a coating etched with a profile similar to that of firefly scales.

Fireflies emit the light for which they’re so recognized and loved through a chemical reaction that takes place in specialized cells called photocytes. The light produced is then emitted through a special part of the insect’s exoskeleton called the cuticle. Since the propagating light travels at different speeds through the cuticle than it does through air, the mismatch causes the light to reflect back dimming the glow.

Misfit scales found on the lantern of the Photuris firefly. (c) Optics Express

Some fireflies, however, like those belonging to the genus Photuris have specialized scales on their cuticles that look like stacked roof tiles that help tone down internal reflection. The same internal reflection issue is also present in man-made LED bulbs. The researchers were intrigued by this and tried to see if they could improve brightness in LEDs through a similar method employed by the Photuris firefly.

“The most important aspect of this work is that it shows how much we can learn by carefully observing nature,” says Annick Bay, a Ph.D. student at the University of Namur in Belgium who studies natural photonic structures, including beetle scales and butterfly wings.

The researchers used a laser to etch a profile into that coating, similar to that of the edges of the firefly scales, that was applied on a gallium nitride LED. The team remarkably reported an increase in efficiency of 55%, findings which were reported in the journal Optics Express in two papers (1 and 2). Hopefully the technique used might be employed in large manufacturing of LEDs.

“We refer to the edge structures as having a factory roof shape,” says Bay.  “The tips of the scales protrude and have a tilted slope, like a factory roof.” The protrusions repeat approximately every 10 micrometers, with a height of approximately 3 micrometers. “In the beginning we thought smaller nanoscale structures would be most important, but surprisingly in the end we found the structure that was the most effective in improving light extraction was this big-scale structure,” says Bay.