A recent study conducted by Californian and Japanese seismologists claims that stable fault areas might not be so stable, in terms of earthquake generation. The controversial findings suggest that creeping fault behavior (more on this in the next paragraph) is actually not only instable, but also capable of creating fast slipping earthquake ruptures.

Faults are planar rock fractures, where the two sides move relatively one to another. Most earthquakes happen on tectonic plate boundaries, but those that don’t, typically happen on faults. When an earthquake happens, the two sides of a fault move fast, but not all the segments of the fault move the same; the general belief is that there are some (relatively) stable segments, who act as barriers against massive earthquake ruptures – these are the segments that exhibit creeping behaviour. However, this new study claims otherwise.

“What we have found, based on laboratory data about rock behavior, is that such supposedly stable segments can behave differently when an earthquake rupture penetrates into them. Instead of arresting the rupture as expected, they can actually join in and hence make earthquakes much larger than anticipated,” says Nadia Lapusta, professor of mechanical engineering and geophysics at Caltech and coauthor of the study, published January 9 in the journal Nature.

Lapusta worked with Hiroyuki Noda, a scientist at JAMSTEC (Japan Agency for Marine-Earth Science and Technology) and former postdoc at CalTech, analyzing both stresses acting on the fault and friction and the resistance of the slip – but the method they used was rather unique.

“The uniqueness of our approach is that we aim to reproduce the entire range of observed fault behaviors—earthquake nucleation, dynamic rupture, postseismic slip, interseismic deformation, patterns of large earthquakes—within the same physical model; other approaches typically focus only on some of these phenomena,” says Lapusta. 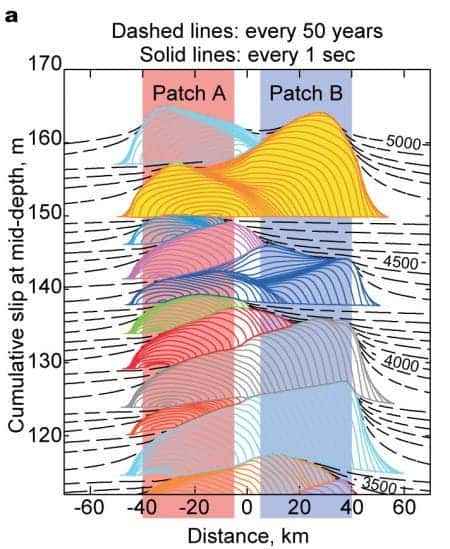 UMERICAL SIMULATIONS ILLUSTRATE THAT FAULT SEGMENTS CAN MOVE SLOWLY AND STABLY OVER LONG PERIODS OF TIME AND LATER HOST LARGE EARTHQUAKES. DASHED LINES REPRESENT SLOW SLIP EVERY 50 YEARS ALONG A CROSS-SECTION OF THE FAULT, WITH THE NUMBERS INDICATING THE SIMULATED TIME IN YEARS. EARTHQUAKES ARE SHOWN BY SOLID LINES PLOTTED EVERY SECOND. THE AREA MARKED PATCH B CAN BOTH SLIP SLOWLY (E.G., DASHED LINES ABOVE THE 4,500 YEAR MARK) AND PARTICIPATE IN LARGE EARTHQUAKES (E.G., YELLOW EVENT). (Credits:CalTech)

In addition to creating the model, the team also assigned realistic fault properties to the model faults – using data obtained from laboratory modelling.

“In that experimental work, rock materials from boreholes cutting through two different parts of the fault were studied, and their properties were found to be conceptually different,” says Lapusta. “One of them had so-called velocity-weakening friction properties, characteristic of earthquake-producing fault segments, and the other one had velocity-strengthening friction, the kind that tends to produce stable creeping behavior under tectonic loading. However, these ‘stable’ samples were found to be much more susceptible to dynamic weakening during rapid earthquake-type motions, due to shear heating.”

The results seemed pretty conclusive, raising even more concern on fault earthquakes, including extreme events – like the one which is expected to occur on the San Andreas fault, in L.A, and places which appear relatively earthquake-free.

“Creeping fault segments can turn from stable to destructive due to dynamic weakening” appears in the January 9 issue of the journal Nature.

Via Nature and JAMSTEC