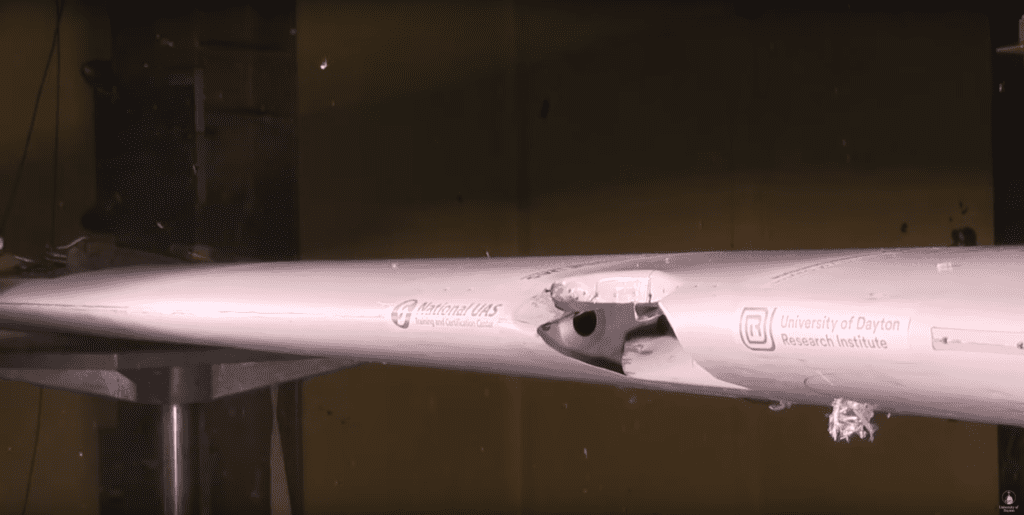 New research from the University of Dayton (UoD) Research Institute shows that these buzzing motes of technology pose a real threat to larger aircraft, with a direct impact able to cause severe structural damage to an aircraft’s frame.

Given that planes are pretty big vehicles and civilian drones tend not to be that way, it’s easy to assume that the former would suffer only minor damage in the case of a collision. However, a new video released by researchers from the University of Dayton shows that this is far from the truth.

The team traditionally studies a similar hazard: that of mid-flight bird-airplane collisions. While such events aren’t too dangerous for planes, they can cause significant difficulties for pilots and some damage to the vehicle. Some of the most dangerous outcomes of a bird-plane collision include broken windows (and subsequent injuries to the crew), and engine damage. The team’s results are forwarded to the aircraft design industry, which uses the data to bird-proof their planes.

Given their background, the team wondered what the outcome of a drone-plane impact would be. In collaboration with researchers at the Sinclair College National UAS Training and Certification Center, they set up an experiment to find out. The test roughly followed the same layout as bird-impact tests: the team set up a target — the wing of a single-engine Mooney M20 — on a fixed mount, shot a drone at it at speeds similar to that of a flying aircraft, and filmed the whole thing. In effect, this simulates a plane hitting a drone during flight.

The footage shows that a drone can cause significant damage to an airplane, should they collide at full speed. Rather than breaking apart, bounding off, or glancing off (like birds tend to do), the drone acted like a cannonball — it tore through the vehicle’s fuselage, causing extensive internal damage. Most worryingly, it chewed right through the wing’s main spar, a key structural unit that carries the plane’s weight (i.e. it’s the part that keeps the wing from breaking off). Damage to the spar has a very high chance of making the plane incapable of flight.

Drone collisions cause greater and more severe damage to planes than birds of comparative size due to their solid motors, batteries, and other parts, the Federal Aviation Administration (FAA) reported in a study last year. These parts are much stiffer than the flesh of birds (which is mostly water), so they don’t disintegrate, and most often penetrate a vehicle’s skin. That study also says the FAA gets more than 250 sightings a month of drones posing potential risks to planes, most often near airports.

The UoD team says we need to do more extensive testing — using different sizes of drones and aircraft models — to fully understand the risks involved in such collisions. Furthermore, they point to a collision between a civilian quadcopter drone and a military helicopter that occurred last year, saying that it’s nearly certain we’ll see more such events in the future. The helicopter in that collision suffered severe damage to its rotor, but was able to make it back to base, crew unharmed.

The FAA called on drone manufacturers to develop and incorporate technology to detect and avoid planes. Judging from the UoD video, that’s a good first step. Pilots definitely shouldn’t rely on sheer luck, or current planes, to save them in a drone impact — both are flimsy defenses.