Professor Gregory Retallack of  University of Oregon has launched a highly controversial claim that stirred the scientific community recently, implying that ancient fossils found in South Australia from Ediacaran period, a geological time that preceded the great Cambrian explosion, were actually living being living on land, not water as “common sense” dictates. 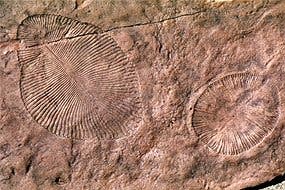 One of the fossils in question – Dickinsonia. Currently, scientists are positive this was a sea-dwelling invertebrate, but recent findings suggest it may actually have been a land-dwelling lichen. (c) Greg Retallack

The Ediacaran period ended some 540 million years ago, and during these geological times life on Earth was highly primitive, comprised of individual cells organized in colonies at best.  Ediacaran fossils have been thought of as fossil jellyfish, worms and sea pens, however Retallack argues that he has found evidence that these invertebrates actually originated on land – a claim that has severe implications for our understanding of how life evolved on our planet.

“This discovery has implications for the tree of life, because it removes Ediacaran fossils from the ancestry of animals,” says Retallack, who is originally from Australia.

“These fossils have been a first-class scientific mystery,” he posited. “They are the oldest large multicellular fossils. They lived immediately before the Cambrian evolutionary explosion that gave rise to familiar modern groups of animals.”

Using an assortment of high-tech chemical and microscopic technique, including electron microprobe and scanning electron microscope, Retallack claims he has found soils with fossils that are distinguished by a surface called ‘old elephant skin,’ which is best preserved under covering sandstone beds.

“The key evidence for this new view is that the beds immediately below the cover sandstones in which they are preserved were fossil soils,” Mr. Retallack said. “In other words the fossils were covered by sand in life position at the top of the soils in which they grew. In addition, frost features and chemical composition of the fossil soils are evidence that they grew in cold dry soils, like lichens in tundra today, rather than in tropical marine lagoons.”

Moreover, the geologist claims that many  Ediacaran fossils exhibit features that he believes resemble today’s lichens, than marine invertebrates as the current scientific consensus,  and he also says there is evidence the land they were growing on was sometimes frozen.

This means the Ediacaran fossils represent “an independent evolutionary radiation of life on land that preceded by at least 20 million years the Cambrian evolutionary explosion of animals in the sea.”

Mr. Retallack says that elevated chemical weathering by organisms on land may have been necessary to propel the demand of nutrient elements by Cambrian animals, and based on other fossils from the Cambrian period similar to those studied by him from the Ediacaran, the geologists goes as far to say life on land may have been more complex than life in the sea during the Cambrian explosion. If this is true, then Ediacaran fossils represent an independent branch on the tree of life.

Of course, such a controversial theory was followed by a wave of protest, as scientists called for more substantial evidence to back up the claims.

“I’m sorry, I’m not a creationist. I do not believe that the Cambrian animals popped into existence out of the blue at the beginning of the Cambrian,” Dr Jim Gehling of the South Australian Museum comments on the paper, referring to the fact that if the Ediacaran fossils are  not of marine origin, than the whole boom of life from the Cambrian simply came from “nothing”.

“It’s the right of every scientist to put up controversial hypotheses but you really have to have good evidence if you want to set up a new paradigm,” he says.

Many scientists have no doubts concerning the marine ancestry of the Ediacaran fossils, pointing to wave ripples and other features only formed in marine environments.  Retallack tackles back these comments stating these ripple features could have very well come from subsequent  floods or lakes. Regarding Retallack’s chemical analysis that revealed evidence of fossils soils, Gehling believes these are mere contaminants from more recent weathering events of the ancient rock outcrops that the fossils are found in. Present scientific consensus has that animals only crawled onto land 100 million years after the Ediacaran.

“I find Retallack’s observations dubious, and his arguments poor. That this was published by Nature is beyond my understanding,” wrote Martin Brasier, a paleobiologist at the University of Oxford.

Retallack doesn’t seem bothered at all by the fact that his hypothesis warrants a whole revamp of the current life evolution cycle we call tree of life. On his part, life on land before the Cambrian evolution makes perfect sense as it would have changed the soil chemistry, he says, allowing the release of mineral ions into the soil water.

“Some of this soil water runs off into streams end eventually the ocean,” says Retallack. “That is going to be the engine that drives the Cambrian explosion.”

“What we’re looking at here is the early stages of the ramping up of that process to create the nutrients needed for animal life in the sea.”

Retallack’s findings were published in the journal Nature.