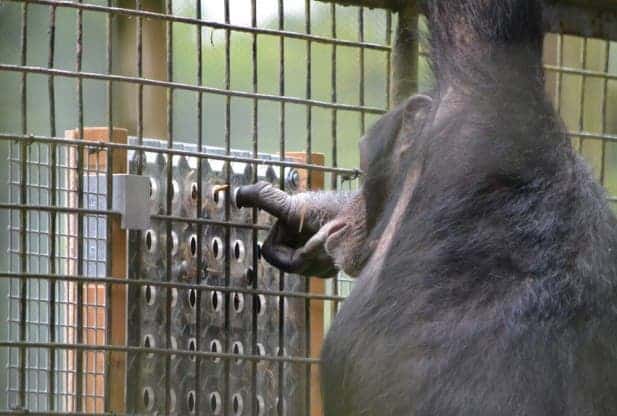 Earlier today I wrote about some recent findings that suggest humans have evolved unique brain structures from other primates. Don’t be fooled however in thinking many of the activities we undertake every day are solely found in human culture. Dolphins communicate with each other much like humans do and besides tool use, chimps know that cooperation is key. The latest example of behavior that’s thought to be exclusive to humans, but encountered in other animals as well is puzzle solving.

We know that there a lot of animals that like to play, especially the young, however puzzle solving just for the thrill of it is typically thought to be an exclusive human trait. A recent experiment conduct by biologists Zoological Society of London (ZSL) showed, however, that chimps enjoy solving puzzles just for the gratification of having completed a challenge, without any other rewards.

The researchers tasked two female chimps and four males to place sticks into holes in simple hardware store plumbing pipes to change the direction of either red dice or Brazil nuts until they fell out into a container. With the dice, the goal was to move them into an exit chamber, but with the nuts, that chamber had been removed so they would fall out of the maze and become a tasty snack to reward the chimps for their work. The researchers even increased the challenge for the chimps by adding additional pipes and making the pipes opaque so the chimpanzees could not see what was inside.

“We noticed that the chimps were keen to complete the puzzle regardless of whether or not they received a food reward,” Fay Clark, a researcher with the Zoological Society, said Saturday in a statement. “This strongly suggests they get similar feelings of satisfaction to humans who often complete brain games for a feel-good reward.”

In the wild, chimps can be often see using tools like wooden sticks peering through various orifices in search of insects and other food. It seems, however, that they also enjoy the challenge of fulfilling a cognitive task just like a human.

“The chimps took part in the cognitive challenge as part of their normal daily routine and doing the brain teaser was completely voluntary,” they said. “This study suggests that like humans, chimpanzees are motivated to solve a puzzle when there is no food reward. They do so for the sake of the challenge itself. It also suggests that chimpanzee cognition can be measured on social groups under more naturalistic conditions.”

The findings were reported in the  American Journal of Primatology.