Some 300 million cases of malaria are reported each year in Africa, the continent where the disease is still running rampant. For decades, scientists have been investing immense amounts of energy battling the disease, trying to come up with effective treatments. The recent step forward in the war against malaria  comes from Maryland-based biotech Sanaria, which reportedly has developed an anti-malaria vaccine with promising results to boast from a phase 1 clinical trial.

A truly effective anti-malaria vaccine, yet still early to get too excited 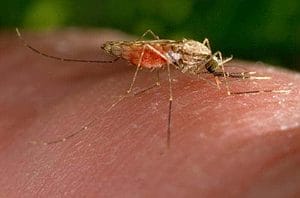 This Anopheles gambiae mosquito is obtaining a blood meal as it feeds on a human host.
Credit: CDC/Jim Gathany

For the phase 1 clinical trial of the vaccine, the researchers recruited  57 adults in a trial carried out at the NIH Clinical Center in Bethesda, Maryland. Of these, 40 subjects were given the vaccine in various doses, while 17 were left for control purposes. Next, the subjects were exposed to malaria-carrying mosquitoes.  Of the 15 people who were given a higher dose of the vaccine, only three were infected, while 16 of 17 of low-dose participants and 11 out of 12 controls were infected.  Naturally, the infected subjects were treated afterwards.

“The trial results constitute the most important advance in malaria vaccine development since the first demonstration of protection with radiation attenuated sporozoite immunization by mosquito bite in the ’70s,” Stefan Kappe, who studies malaria at the Seattle Biomedical Research Institute, told Nature.

A serious drawback to the anti-malaria vaccine, fully described in a paper published in the journal Science, is that it needs to be administered intravenously,  as previous studies showed that it’s less effective when injected in the muscle or other tissue. One other downside is that it’s a vaccine. What I mean is that it’s both expensive and intrusive. Alright, you might not care about needles or anything like that when you’re infected with malaria; you just want it the heck out of your system. But you need to have access to it in the first place. The vaccine, effective or not, will prove to be extremely expensive to supply to the millions of potential infected in Africa and other parts of the world.

However, an alternate solution might exist. A team of young African students were recently awarded $25,000 as part of the  Global Social Venture Competition (GSVC) award, after they developed a malaria-repellant soap using local herbs.

“We want a simple solution, because every one uses soaps, even in the very poor communities”, Moktar Dembélé, General Manager of Faso soap said. The soap was named Faso after the home country of the two students who made it – Burukina Faso.

Faso soap becomes then a solution from Africa to African problems as it requires nothing, even mindset change or big economic efforts. So far, what we know is that it’s made from karate citronella, and other herbs that are still a secret.

“The soap will be available first here, and then given to NGO”, Gerard Niyondiko, Technical Manager of Faso soap said in a video that was posted online today.