Far beyond being simplistic “killer machines“, sharks are extremely complex and not very well understood creatures. They have many adaptations to make them excellent at finding and hunting their prey. Thanks to these adaptations, sharks have been successfully roaming the oceans for 450 million years. Besides that, sharks are extremely diverse. There are sharks that only eat plankton, some that live at such depths that they are rarely seen, bottom feeders, tiny sharks, and saw-nosed sharks. There are so many interesting facts about all of them, but here are just a few fascinating shark facts:

Smooth as a shark

Although shark skin looks smooth, it’s rough to the touch. If you examine it microscopically, it is composed of little tooth-like structures. They are called denticles and protect the skin. These structures even look a bit like shark teeth and their outer layer is made of enamel just like teeth! They help the shark glide through the water and reduce drag, letting the shark swim faster. Denticles also prevent bacterial growth and organisms from growing on it. They are the reason why you don’t see any algae or barnacles on sharks; the denticles prevent them from latching on, keeping shark skin squeaky clean. 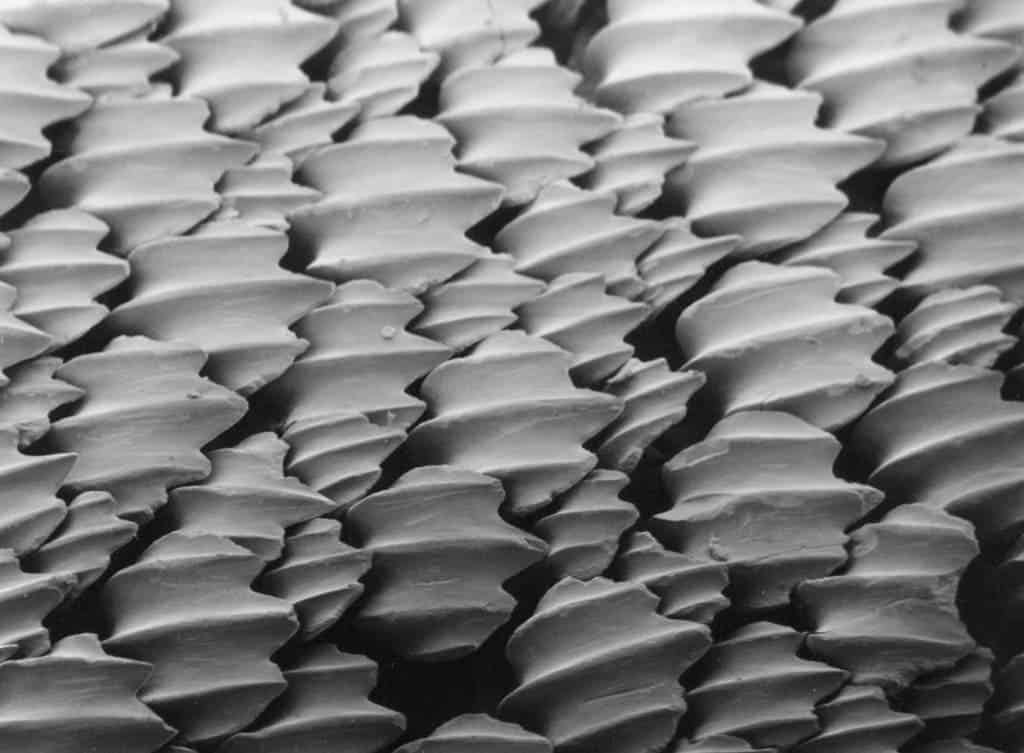 A close-up of the tooth-like denticles. Image credits: Pascal Deynat/Odontobase

Thirst for blood begins in the embryo

Many sharks give birth to live baby sharks. When a sand tiger shark (Carcharias taurus) becomes pregnant, it can contain up to 12 embryos. However, the largest embryo eats all the other growing embryos except for one! The shark actually only gives birth to two sharks. Talk about a thirst for blood running deep. There’s a reason why these larger embryos eat the rest, and no, it’s not because they are hungry or inherently evil. These lady sharks are fertilized by more than one male shark, so one pregnant female carries embryos from multiple different fathers.

In the entire animal kingdom, it is very important for male animals to ensure that their genetic material get passed on to the next generation. They have mechanisms in place to compete with other males and make sure that their female doesn’t mate again. For example, some males guard females after mating, others use their penises to clean other males’ sperm out of their female’s vagina, and others put a plug or toxic fluids in the vagina to prevent re-mating. In sharks, this battle for paternity plays out in the womb. One male’s offspring kills all of the others in the womb so that the two sharks that are born are both from the same father. This strategy actually helps the survival of these sharks, as it allows sand tiger sharks to give birth to much larger offspring than other sharks, boosting their survival. 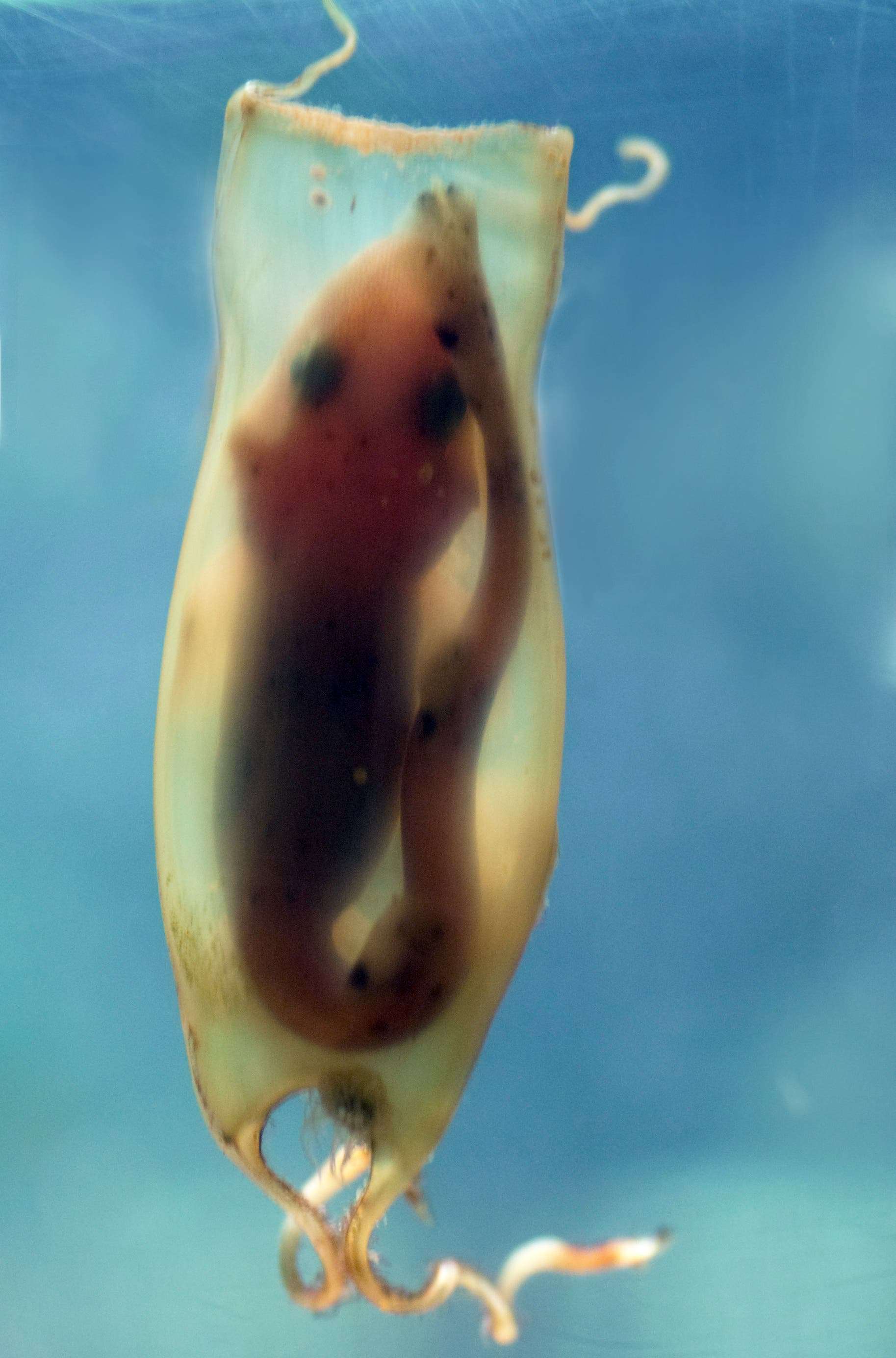 Shark that don’t give bith to live offsrping give birth to eggcases, in which the embryos continue to develop. Image credits: Alice Wiegand

One drop of blood

Sharks have an extremely sensitive sense of smell! Their nostrils are on the underside of their snouts and are designed solely to smell. They are equipped with special, sensitive olfactory cells and the olfactory bulb of the brain is enlarged to detect really tiny quantities of their prey. Some sharks, such as blacktip and grey reef sharks, can detect their prey at a concentration of one part per 10 billion. This is equivalent to one drop of blood in an Olympic-sized swimming pool. That’s a crazy sense of smell. Lemon sharks can detect 1 part of tuna in 25 million parts of seawater, which is about 10 drops in an average home swimming pool. Sharks’ sense of smell may be exaggerated in the media, but they actually can detect their prey at incredible distances. 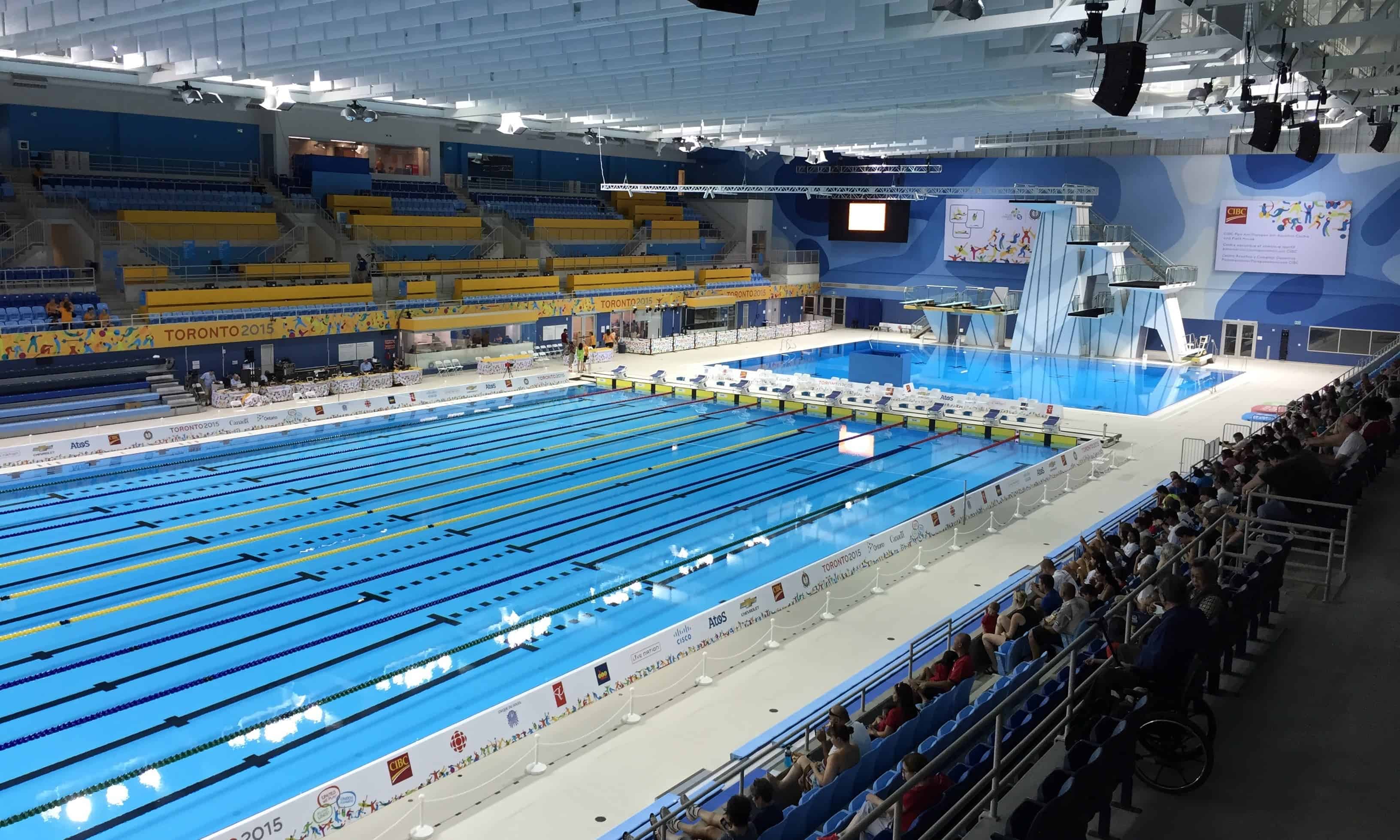 Some sharks can detect one drop of blood in a pool like this! Image credits: TorontoGuy79

The smallest shark in the world is a species of dogfish called the dwarf lanternshark (Etmopterus perryi) that grows to a maximum size of about 21 cm. To have an idea of the size, this shark can fit comfortable in a human hand.  Dwarf lantern sharks are bioluminescent; they emit light from their belly and fins to blend in with light coming from above. They have large eyes to be able to see in the dark. These sharks are only found off the coast of Colombia and Venezuela, at a depth of 283-439 m (928-1,440 feet). Very little is known about this shark otherwise.

Sharks shed their teeth constantly and re-grow them easily. Some Carcharhiniformes sharks and great white sharks can shed approximately 30,000 teeth in their lifetime. However, this is only an estimate because a lot about sharks’ lives is unknown. Teeth can be lost by being stuck in prey or broken. Sharks have on average 15 rows of teeth arranged in conveyor belt-like rows. Most sharks have 5 rows, and some sharks have many more. For example, bull sharks have up to 50 rows of teeth. Because of this arrangement, teeth can be replaced in a day. Great sharks shed their teeth constantly, even without breakage, to keep their chompers in top condition. Even their babies shed teeth in the womb. 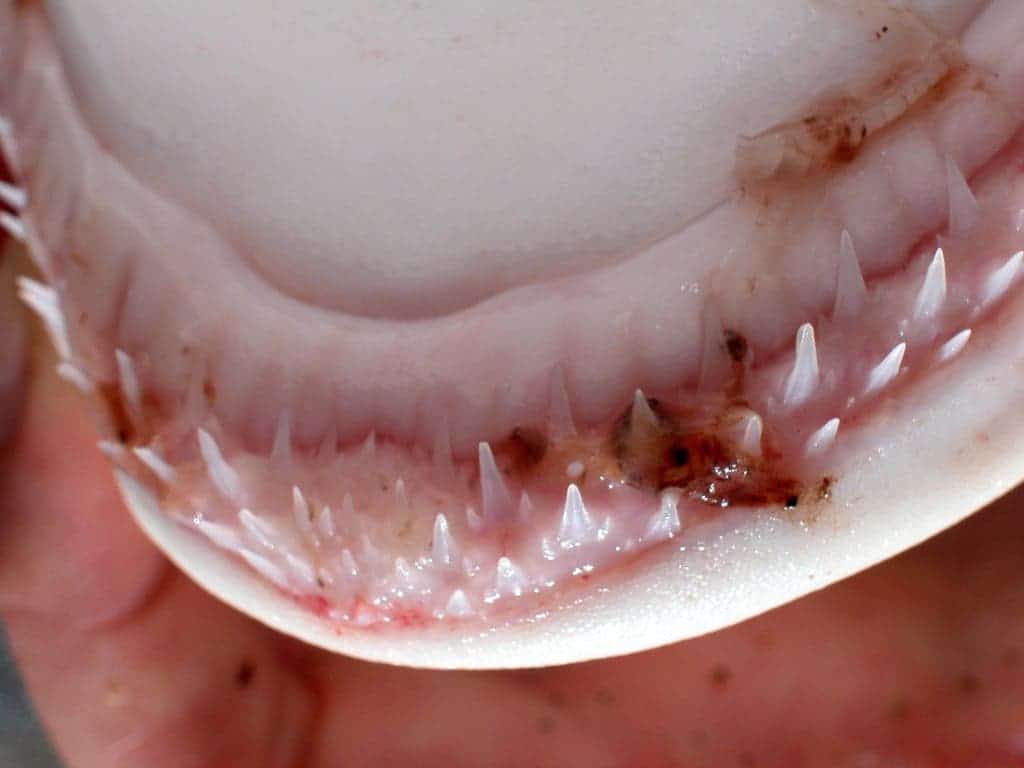 The oldest known vertebrate is the Greenland shark (Somniosus microcephalus). Researchers dated these 28 of these sharks by radiocarbon dating their eyes. Their bodies are soft and don’t provide any information about their age, but luckily their eyes contain proteins that are deposited and never changed. Researchers found out how old the sharks were this way. One female was estimated at 400 years old, making her the oldest known vertebrate in the world. These sharks grow extremely slowly; only 1 cm a year and are sexually mature at the age of 150. 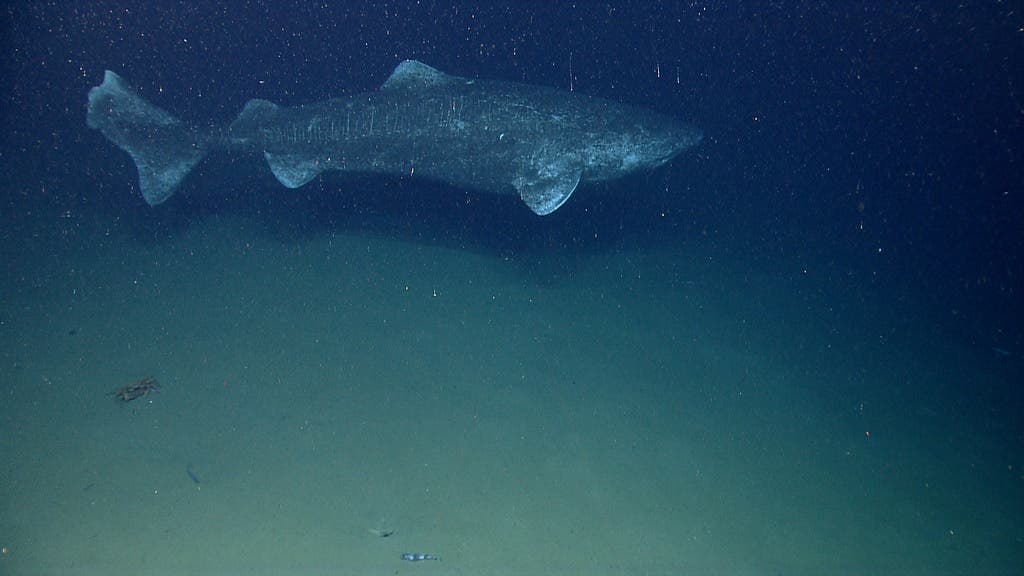 Sharks can detect weak electric fields. Sharks have structures called ampullae of Lorenzini around their snouts and eyes. These are thin jelly-filled canals that extend to the skin’s surface where their nerve cells can detect faint electric stimuli. They use this sense to detect the heartbeat of fish as prey, such as ones that are buried in sand and impossible to see. The bioelectric field created by a heartbeat doesn’t travel very far so the shark needs to be quite close to the fish to sense it. 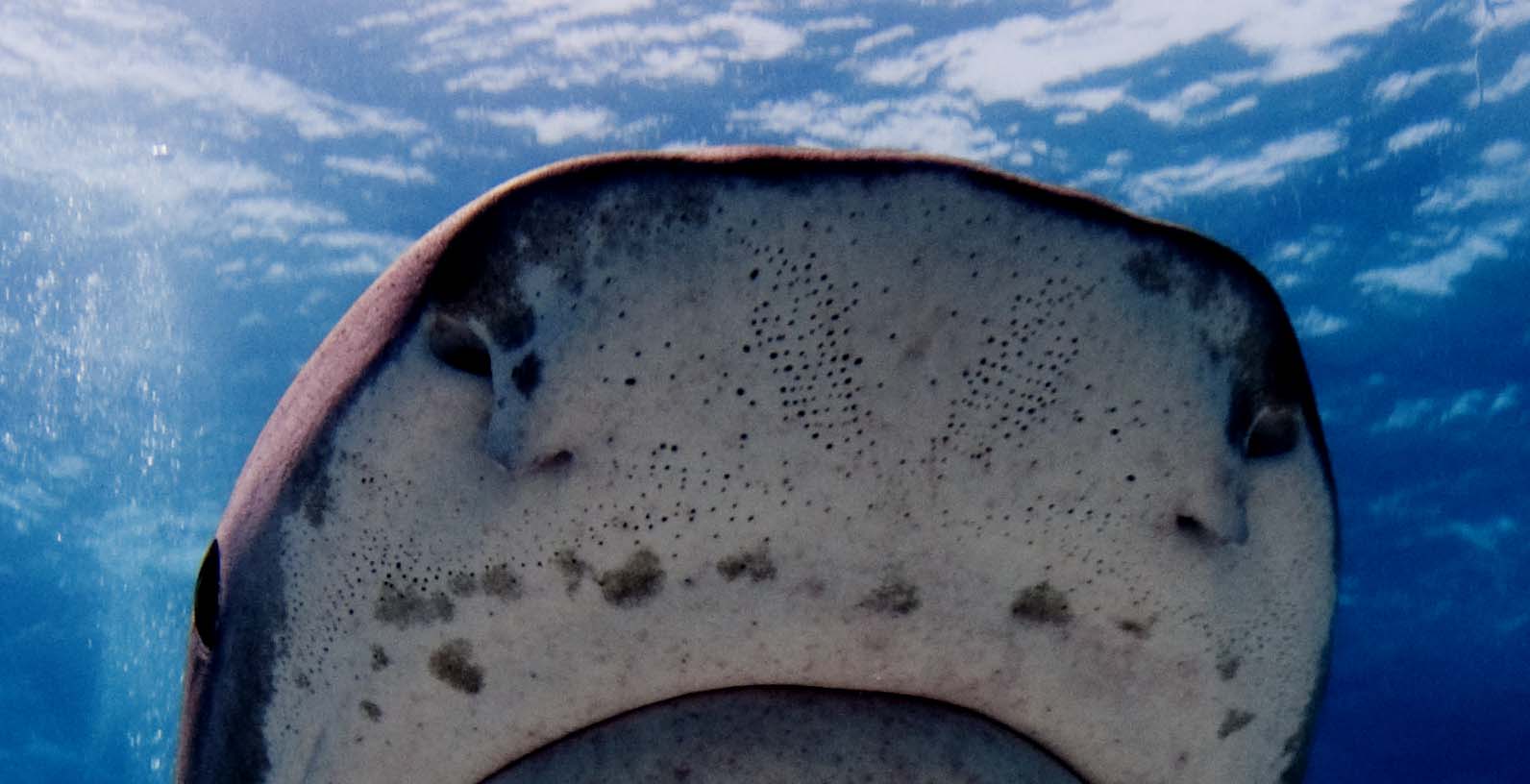 The external openings of the ampullae of Lorenzini. Image credits: Albert kok

Hammerheads have a more advanced sense of electroreception and use it to find stingrays, which bury themselves in sand, to eat. Sometimes, sharks get confused by metal that gives off electric fields and might think that an inanimate object, like a boat, is prey. 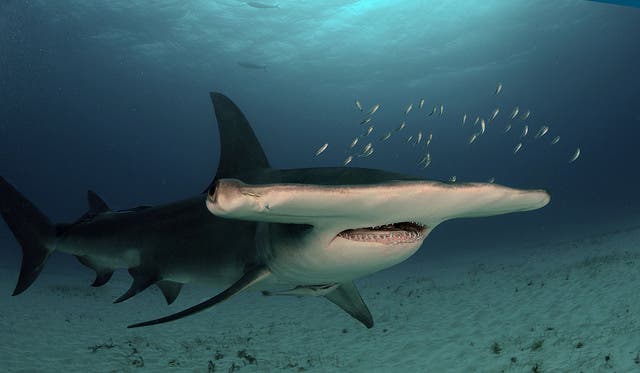 Sharks are fascinating and there is still so much to learn about them!