Sinkholes always seem to be in the news. Unfortunately, they’re often the cause of some tragedy and they always seem to surprise authorities. But while they are unpredictable, sinkholes are less of an oddity than you might think. Let’s see what sinkholes are, how they form, and what dangers they pose.

What is a sinkhole

They go by called many names (snake hole, swallow hole, or doline). They’re big, they appear seemingly out of nowhere, and they can “devour” houses in the blink of an eye. But in reality, they develop over many years and require very specific conditions and processes to form (although we may not always see them with the naked eye).

They are basically natural depressions or holes in the Earth’s surface, typically caused by karst processes. Karst processes occur when bedrocks are soluble. In practical terms, this means that in 99% of all cases, sinkholes pop up in carbonate rocks (like limestone or dolomite) or evaporitic rocks (like gypsum or anhydrite). While they can occur in other environments, this is rarely a reason for concern.

A common mechanism for sinkhole formation

The problem with the above-mentioned rocks is that they can be dissolved by water. A sinkhole has no natural external surface drainage – when it rains, all the water stays inside the sinkhole and typically drains into the subsurface, dissolving away at the surrounding rock.

This is the dominant phenomenon for sinkhole formation regardless of their size. Sinkholes can be smaller than a meter, or over 100 meters in depth (in Venezuela for instance, multiple sinkholes have reached about 1,000 feet wide and 1,150 feet deep). They can also have very different shapes; some are just like a shallow saucer or bowl, while others are much more vertical. Some actually form water, and you’ve probably seen this in the form of little ponds in limestone.

Unfortunately, even though sinkholes form so slowly, their formation is not always visible on the surface.

What really makes them dangerous is the fact that they’re really unpredictable. They form so slowly, that without thorough geological or geophysical research, you can’t really tell if something’s changing — this is why collapses have dramatic, unexpected effects, especially in urban settings.

But we can know which areas are more prone to sinkhole formation, and this can help us be more prepared.

If you want to see whether your area is prone to sinkhole formation, the first thing to do is check out a geological map.

As mentioned previously, sinkholes are almost always prone to karst areas. In such areas, it’s sometimes possible to see hundreds or even thousands of sinkholes in a small area, and no surface streams, because all the drainage occurs subsurface. Evaporite rocks underlie about 35 to 40 percent of the United States, but in most cases, they are buried very deep, so there are only a few threatened areas.

The most impressive sinkholes form in thick layers of homogenous limestone. Their formation is facilitated by high groundwater flow, often caused by high rainfall. When these thick, relatively soluble layers sit on top of insoluble rocks, significant underground streams (or even rivers) may form, dissolving a significant quantity of rock, creating large underground voids.

So don’t be fooled by what’s on the surface: the surface can be completely fine, but if the subsurface is karst, it’s worth a more careful look. 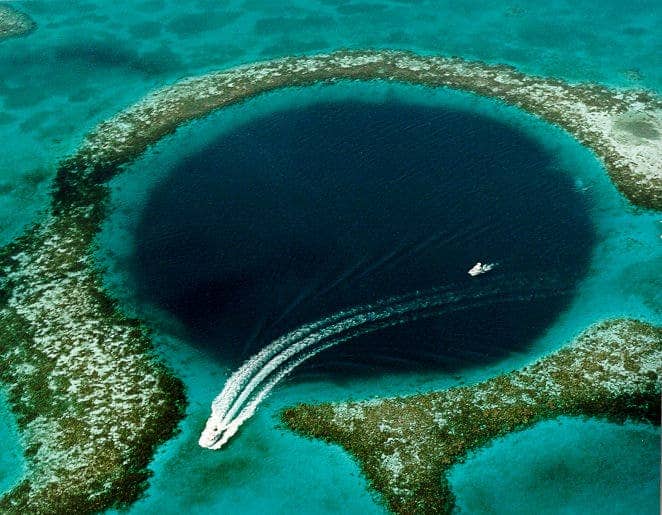 Sinkholes can also be underwater. They’re typically called blue holes in this scenario and have been described especially in the Bahamas area.

Strictly speaking, there are three types of sinkholes, but from a practical perspective, it’s also worth mentioning a fourth (which is the first one on this list).

Yes, sinkholes can be created, or at least exacerbated by human activity. 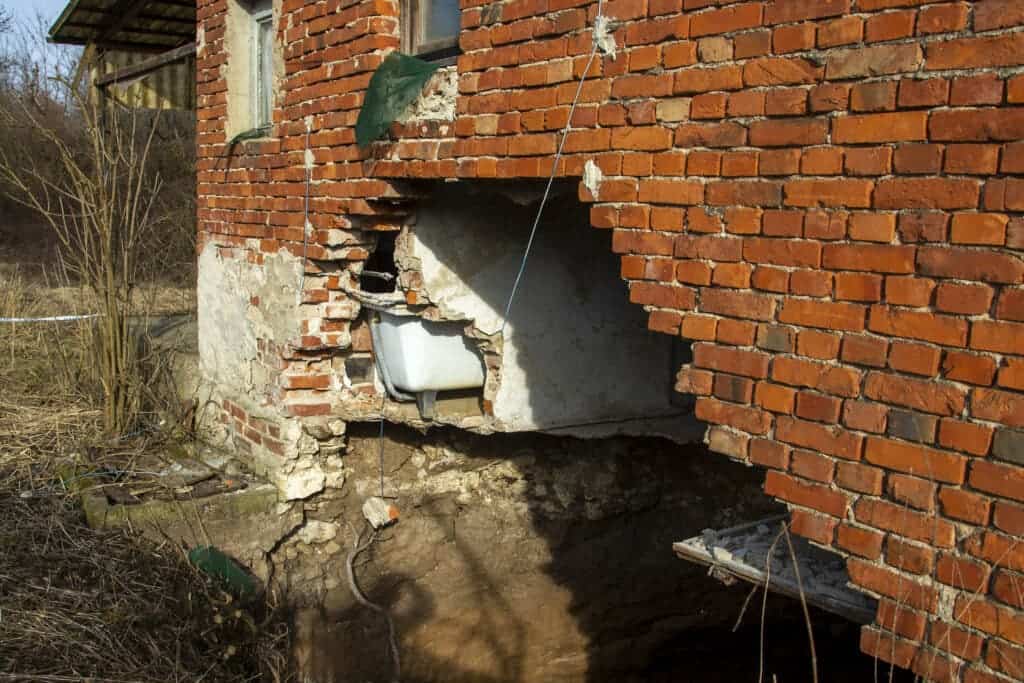 This photo shows a sinkhole under a house in the village of Mececani, central Croatia, Thursday, March 4, 2021. Image credits: Darko Bandic.

This type of sinkhole is actually quite common (not as common as natural ones, but still relevant, especially in urban areas). They can be caused by a number of human activities, most notably groundwater pumping and construction and development practices.

The most common activities which lead to this type of phenomena are drilling, mining, significant changes in weight (think lots of construction in a relatively pristine area), and a heavy increase in water flow (like say, a formation of an artificial pond, pipe leakage, etc.

In one sense, urban sinkholes can be seen as a way for the environment to fight back. Although sinkholes are fairly common in nature, but humanity’s interference can make them much more common if the conditions are right 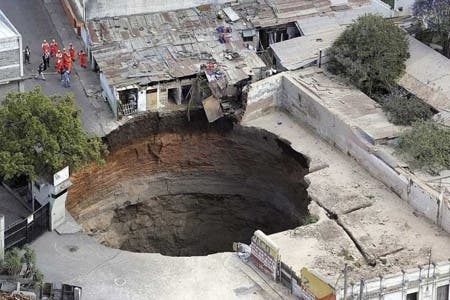 Basically, either more water appears in the system, which dissolves and creates an underground void, or the underground is already present, and there is an increase on the pressure exerted on the surface – or a combination of these. Whenever the structural and chemical balance is disturbed – sinkholes can occur.

As the name describes, dissolution (the process of dissolving a solid substance into a solvent to make a solution) is the driving factor here. Dissolution of the limestone or dolomite is most intensive where the water first contacts the rock surface.

Cover-subsidence sinkholes tend to develop gradually where the covering sediments are permeable and contain sand. Not really your typical sinkhole, this type is not common, and can often go undetected for long periods of time – which is pretty much the only thing that can make them dangerous.

These are pretty much the most dangerous type of sinkhole. Cover-collapse sinkholes develop very fast (sometimes even in a matter of hours), and can have catastrophic damage. They occur where the covering sediments contain a significant amount of clay; over time, surface drainage, erosion, and deposition of sinkhole into a shallower bowl-shaped depression. To put it in simple terms, the ground simply can’t support the load on top of it.

You can add sinkholes to the long list of things that climate change is making worse. Yes, really.

“The occurrence frequency and intensity of many natural geohazards, such as landslides, debris flows and earthquakes, have increased in response to global warming,” one recent study found. How much worse? For every 0.1℃ rise in temperature, the number of sinkholes increases by 1%-3%.

So far, the average global temperature on Earth has increased by a little more than 1° Celsius (2° Fahrenheit) since 1880, but projections show that we are on track for at least double that unless drastic change happens soon.

So how common are sinkholes, really?

The thing is, unlike earthquakes or hurricanes, sinkholes aren’t really tracked. No government agency keeps track of sinkholes from man-made causes. Since they appear in so many areas, it’s practically impossible to predict where they will appear — we can only talk about areas prone to them. Any karst-dominated area has some, be they big or small, as do areas with surface evaporites. This is why big portions of the Middle East, for example, are just riddled with sinkholes. In the US, Florida is almost certainly the most threatened state. From what I can dig up, from 2006 to 2010 in Florida alone, there were 24,671 insurance claims for sinkholes. In parts of England or Italy, sinkholes are also quite common.

If you live in an area that doesn’t have sinkhole-favorable geology, there’s no need to worry too much about it. If you do, however, it could be worth getting in contact with your recent geological survey organization and ask if they know anything about potential risk.

To some extent, you can also look for certain tells, such as sagging trees or fence posts, doors or windows that won’t close properly, and rainwater collecting in unusual spots. If you’re worried, then you should always consult a professional geologist or geotechnical engineering firm that can explain the situation. If indeed there is a possibility of a sinkhole near your home, they can even inject a specific concoction to fill up the cracks and strengthen the foundation.

Sinkholes are an area of active research, both in terms of local surveys and general science. Here are some of the recent research findings in the field.

Earthquakes can trigger sinkholes. The appearance of sinkholes is not unusual following strong seismic activity, but researchers in Croatia were recently shocked to see over 100 previously unknown sinkholes after one earthquake. Sinkholes also seem to be appearing in the wrong places. Previous maps don’t seem to account for recent risks, and a number of areas where sinkholes hadn’t been previously reported are starting to have problems.

Thankfully, researchers are also finding new ways to study sinkholes. While geophysical surveys already offer a way to map the subsurface and identify nascent sinkhole areas, one of the more innovative ideas is to use internet fiber optics.

“We discovered the fibers could pick up a wide variety of signal vibrations, from thunderstorms to human walking steps to music concerts,” said Tieyuan Zhu, assistant professor of geophysics at Penn State and principal investigator on the project. “We can even distinguish the specific song at a concert by the patterns of the high and low tones. That’s a great demonstration of the sensitivity of these sensors.”

Using this approach, researchers can have access to a passive monitoring system of an urban area’s subsurface and look for sinkholes. While this is an emerging technology and there are current limitations, it’s a promising way to identify and monitor sinkhole formation.

Pictures via Wikipedia and USGS.

17 thoughts on “What are sinkholes: how they form and why they’re so dangerous”