Most waves form due to winds or tides, but tsunamis have a different cause altogether. A tsunami is most often formed by an earthquake, but it can also be formed by an underwater landslide, volcano eruption or even meteorite.

The process is fairly complex, so let’s start digging into it. 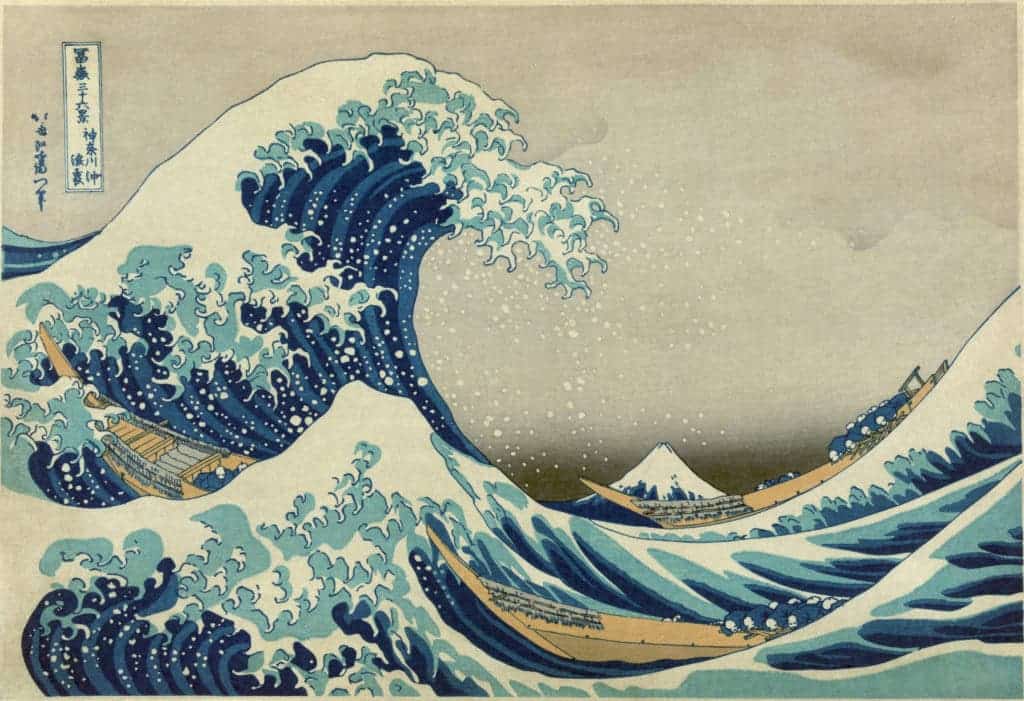 The Great Wave off Kanagawa, an artistic depiction of a tsunami by Katsushika Hokusai.

What is a tsunami

“Tsunami” is a Japanese word meaning “harbor wave,” but that doesn’t say much about their nature, and tsunamis are not nearly restricted to harbors. A more accurate term would be “seismic sea waves,” and it would describe them more accurately. However, tsunami has stuck and it’s what everyone uses today. People sometimes refer to them as “tidal waves,” but that term is technically incorrect and should be avoided in this context.

Tsunamis are indeed waves, but unlike wind waves, they have a much larger wavelength. Think a bit about waves — in the context of physics, not in the context of sea waves. A defining characteristic of every wave is its wavelength. Wind waves have short wavelengths which can be clearly seen on any shoreline. They come in every few seconds, with a few meters  in between — sometimes, even less. But a tsunami has a huge wavelength, oftentimes longer than a hundred kilometers and this is why they are so dangerous (more on that a bit later). Tsunamis are almost always not singular waves, but come in as train waves.

The vast majority of tsunamis form due to earthquakes — specifically tectonic tsunamis. As an earthquake happens, the ground beneath the water is moved up and/or down abruptly and as this movement happens, a mass of water is displaced and starts moving in all directions. This marks the start of a tsunami.

The displaced water starts to move as a wave. At this point, it has a very low amplitude as it is located in deep water (earthquakes on the coastline rarely cause tsunamis). Tsunamis in open water are usually shorter than 0.3 meters (12 inches).

Image by Régis Lachaume. Propagation of a tsunami offshore, showing the variation of wavelength and amplitude as a function of depth.

As the wave starts moving towards the shore, a series of events begin to occur. First of all, water gets shallower and shallower. As a result, the height of the tsunami starts to increase, and can increase dramatically. This is the main reason why these waves are so dangerous: They carry on huge masses of water. When they get closer to the shoreline, the volume of the tsunami remains constant, but because the water gets shallower, their height starts to increase.

The 3D simulation below shows how the process is taking place — note the waterline retreating before the tsunami hits. This is called a drawback.

Also, the shallow water somewhat slows down the waves and the waves start getting closer together. In the deepest parts of the ocean, tsunamis can travel faster than a jet, at 970 kph (600 mph). This means that in only a few hours, it can cross entire oceans.

Tsunamis don’t stop once they hit land. Much of their energy is dissipated and reflected back, but some of it is still maintained and tsunamis will continue to travel inland until all their energy is gone. So don’t think that if you’re a bit farther from the beach, you’re safe. In some rare instances, tsunamis can also travel up river valleys.

How tsunamis form — from other sources

In rare cases, tsunamis can also be caused by landslides, volcano eruptions, and meteorites. In all cases the main principle is the same — a water mass is displaced and as it nears the shoreline it starts growing in height. However, the displacement mechanism differs.

Underwater, landslides are often similar to volcanoes that avalanche into the sea. This process happens as a result of an earthquake, so in a way, the main source is still an earthquake. However, earthquakes can also merely loosen landmass which starts falling at some later point. 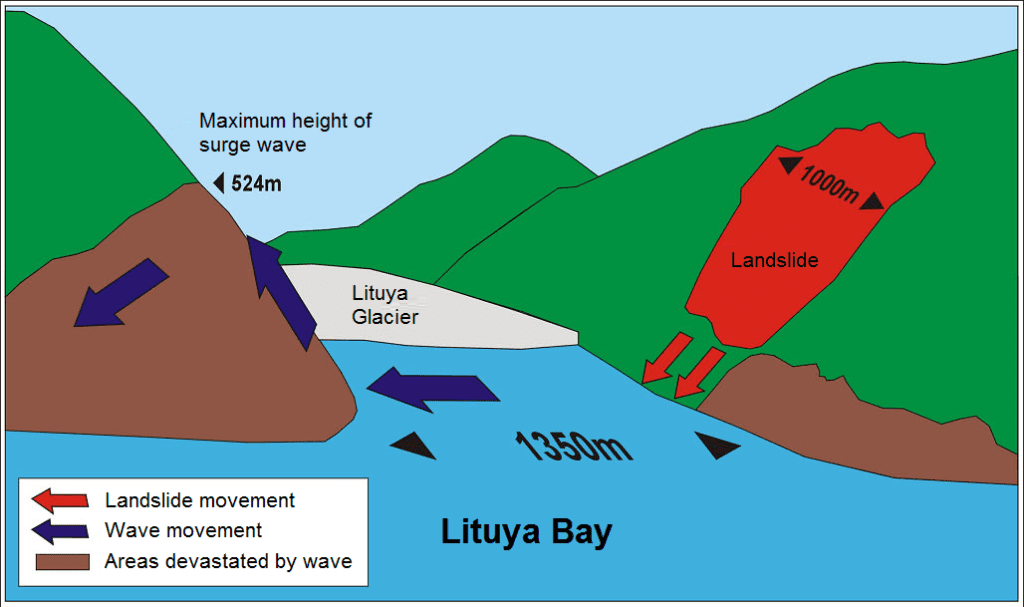 Lituya Bay, Alaska, is an area prone to tsunamis (via Wikipedia).

Volcanoes can form tsunamis through two mechanisms. Either they collapse or they eject matter with such strength that they uplift the water. In the first case, land-based volcanoes can also cause tsunamis, if they are very close to the sea.

If you’ve ever thrown a pebble into the water, you’ve seen that it creates ripples. The meteorite works in pretty much the same way, except it creates huge ripples. This kind of tsunamis are really rare, but there is an instance in 1958 where such a wave was created by rockfall in Lituya Bay, Alaska.

Why tsunamis are so dangerous

Tsunamis are not always colossal waves when they come into the shore. According to the USGS, “… most tsunamis do not result in giant breaking waves (like normal surf waves at the beach that curl over as they approach shore). Rather, they come in much like very strong and very fast tides (i.e., a rapid, local rise in sea level).”

By now, you should have a pretty clear idea why tsunamis are so dangerous. They can be very long (100 kilometers is a reasonable length), very high (the 2011 Japan tsunami measured over 10 meters) and can travel extremely fast without losing much of their energy. An earthquake far into the ocean can send several devastating tsunamis hundreds or even thousands of kilometers away. 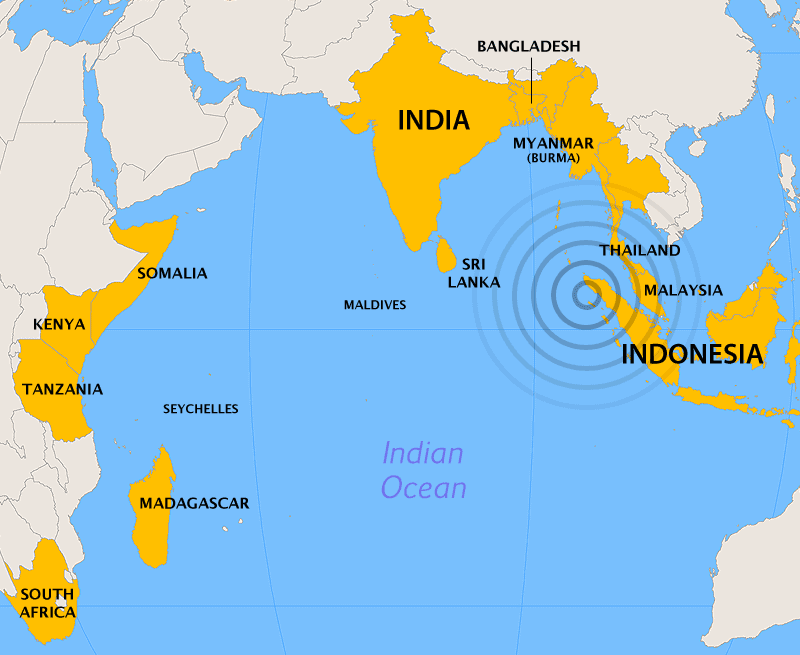 A map of the 2004 tsunami with the highlighted epicenter.

In 2004, an earthquake with the epicenter off the west coast of Sumatra, Indonesia struck with a magnitude of 9.1–9.3. The Indian Plate was subducted by the Burma Plate and triggered a series of devastating tsunamis, some over 30 meters high. The tsunamis killed over 230,000 people in 14 countries, being one of the biggest natural disasters in human history. It is just one in many tragic examples highlighting the sheer force of tsunamis.

Since science cannot predict when earthquakes will occur, we cannot determine exactly when a tsunami will be generated. However, that doesn’t mean we’re clueless. With the aid of historical records of tsunamis and numerical models of their size and speed, we can get a pretty good idea as to where they’re likely to be generated. You should always know if you’re in a tsunami risk zone. An estimated 85% of all tsunamis have been observed in the Pacific Ocean in the “Ring of Fire,” but other areas can be dangerous as well and as we mentioned above, tsunamis can also travel great distances.

One thought on “What are tsunamis and how they form”