Forests cover 1/3 of the earth’s surface and contain an estimated 3 trillion trees. Forests exist in dry, wet, bitterly cold, and swelteringly hot climates. These different forests all have special characteristics that allow them to thrive in their particular climate.

Broadly speaking, there are three major forest zones that are separated according to their distance from the equator. These are:

There are also more specific types of forests within these larger regions.

Tropical rain forests grow around the equator in South America, Africa, and Southeast Asia. They have the highest species diversity per area in the world, containing millions of different species. Even though they cover only a small part of the earth, they house at least one half of all species. The temperature is stable year-round, around 27°C (60° Fahrenheit). As you can tell from the name, it rains a lot in these forests. Most tropical forests receive at least 200 cm (80 inches) of rain in a year. Tropical forests generally have a rainy and dry season. 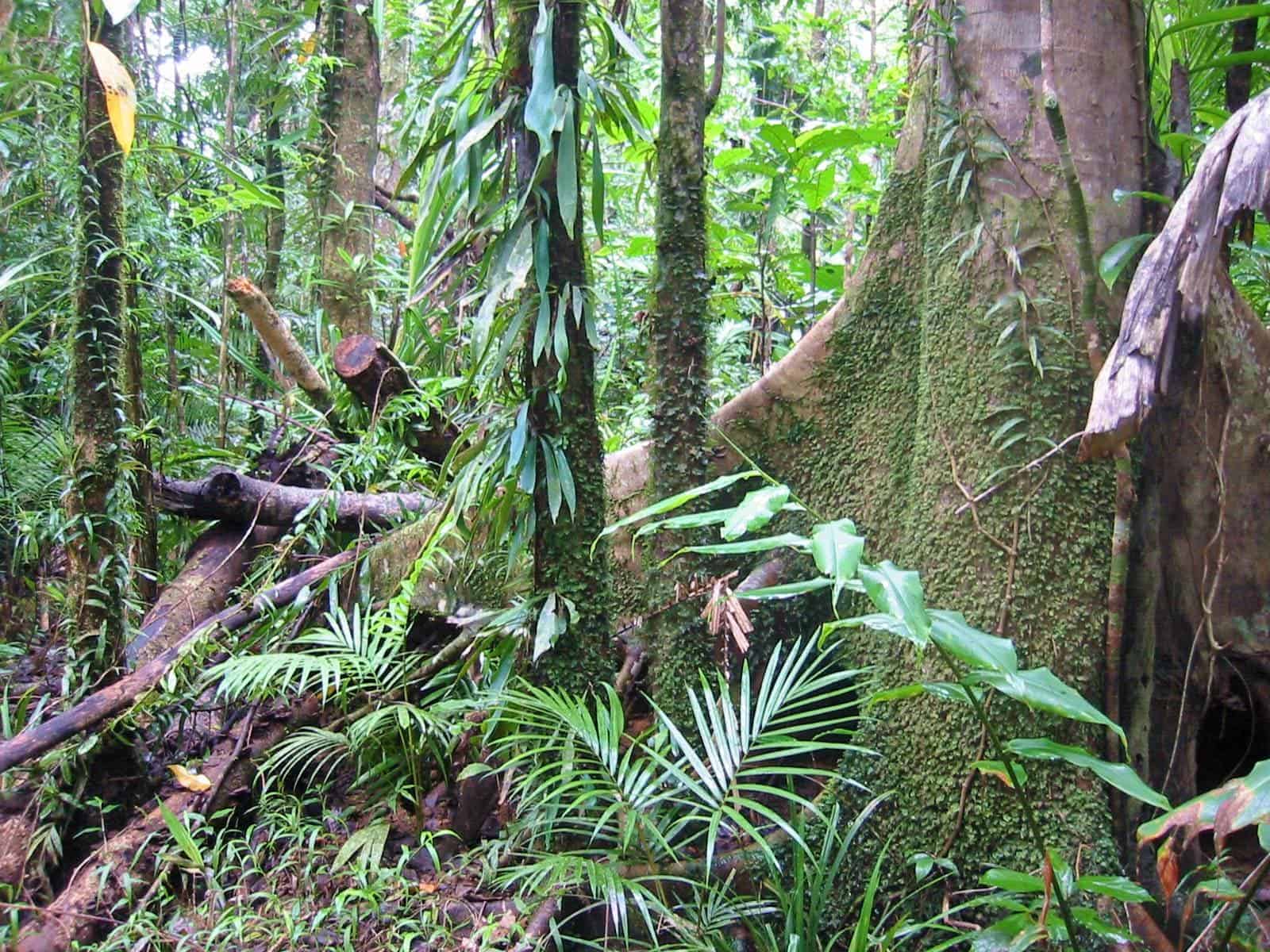 The high temperatures, abundant rainfall, together with twelve hours of light a day promotes the growth of many different plants. One square kilometer (0.6 miles) can have up to 100 different tree species. Broadleaf trees, mosses, ferns, palms, and orchids all thrive in rain forests. The trees grow very densely together and the branches and leaves block most of the light from penetrating to the understory. Many animals adapted to life in trees — such as monkeys, snakes, frogs, lizards, and small mammals — are found in these forests.

The soil can be several meters deep, but due to nutrient leaching, it lacks most of the essential nutrients for plant growth. The thin topsoil layer contains all the nutrients from decaying plants and animals, and this thin layer sustains the many plant species in the forest. One might think that the soil would be very rich because it supports so much life, but when tropical forests are clear-cut, the soil is useless for agriculture after only a few years — when the topsoil becomes depleted.

Temperate forests occur in the next latitude ring, in North America, northeastern Asia, and Europe. There are four well-defined seasons in this zone including winter. In general, the temperature ranges from -30 to 30°C (-22 to 86 F) and the forests receive 75-150 cm (30-60 in) of precipitation per year. Deciduous — or leaf-shedding — trees make up a large proportion of the tree composition in addition to some coniferous trees such as pines and firs. The decaying fallen leaves and moderate temperatures combine to create fertile soil. On average, there are 3-4 tree species per square km. Common tree species are oak, beech, maple, elm, birch, willow, and hickory trees. Common animals that live in the forest are squirrels, rabbits, birds, deer, wolves, foxes, and bears. They are adapted to both cold winters and warm summer weather. 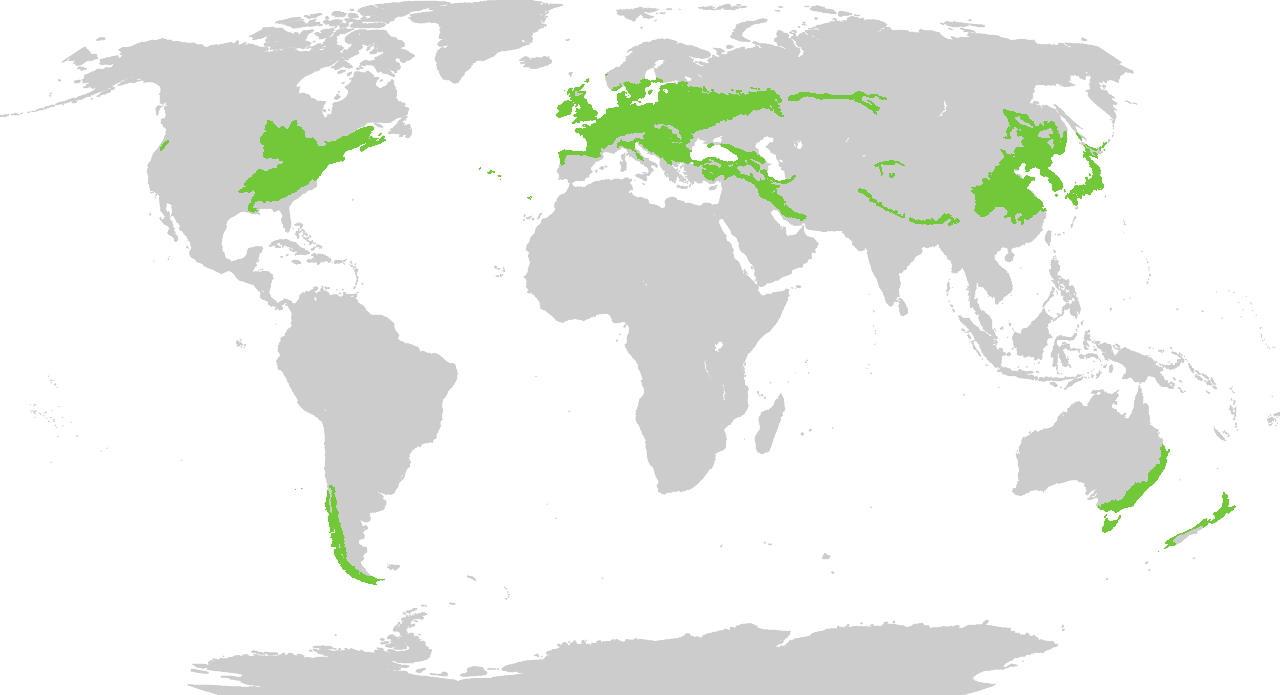 Temperate evergreen coniferous forests are found in the northwestern Americas, South Japan, New Zealand, and Northwestern Europe. These forests are also called temperate rain forests because of the large amount of rainfall they see. The temperature stays pretty constant throughout the year, with a lot of precipitation, 130-500 cm (50-200 in). All this rain creates a moist climate and a long growing season, which results in very large trees. Evergreen conifers dominate these forests. Common species are cedar, cypress, pine, spruce, redwood, and fir. There are still some deciduous trees such as maples and many mosses and ferns — resulting in a Jurassic-looking forest. Common animals roaming the woods are deer, elk, bears, owls, and marmots. 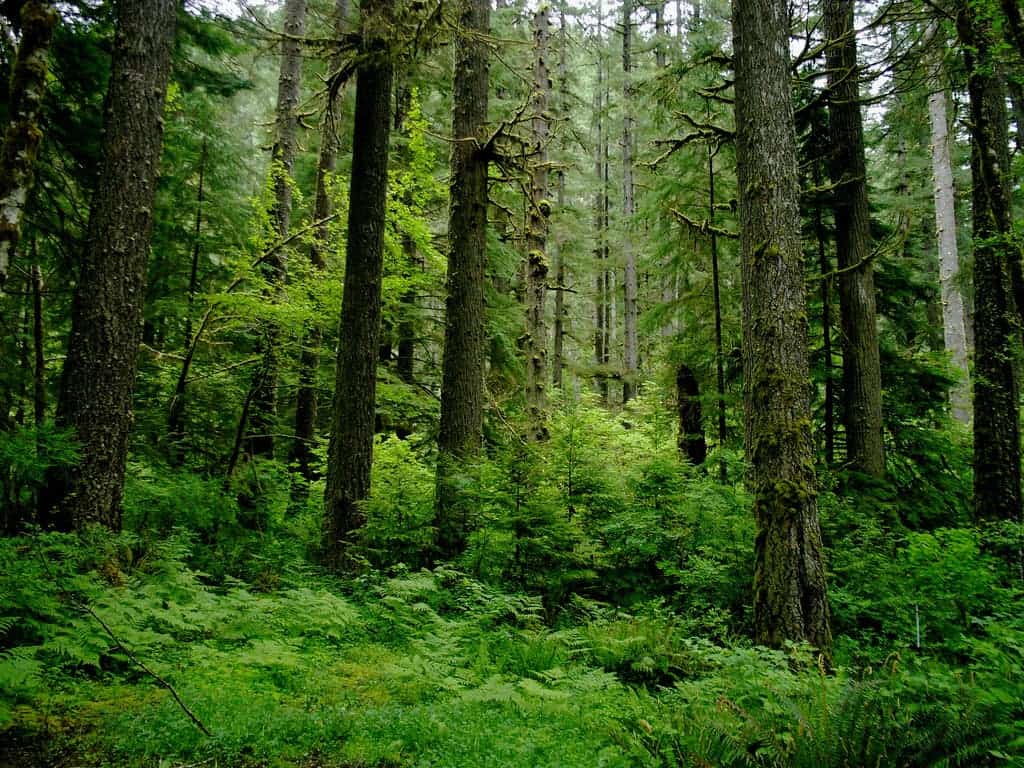 Boreal forests, also called taiga, are found between 50 and 60 degree of latitude in the sub-Arctic zone. This area contains Siberia, Scandinavia, Alaska, and Canada. Trees are coniferous and evergreen.

There are two seasons here: a short, moist, mildly-warm summer and a long cold dry winter. Temperatures range from -40 to 20°C (-40 to 68° Fahrenheit). Precipitation is usually delivered as snow because it is so cold, 40-100 cm (15-40 inches) each year. The ground is comprised of a very thin layer of nutrient-poor, acidic soil. The canopy lets very little light through so there is usually little growing in the understory. Evergreen conifers with needle leaves that can stand the cold, like pine, fir, and spruce trees, live here. Animals that live in these forests can withstand long periods of cold temperatures and usually have thick fur or other insulation — among them are moose, bears, lynx, wolf, deer, wolverines, caribou, bats, small mammals, and birds. 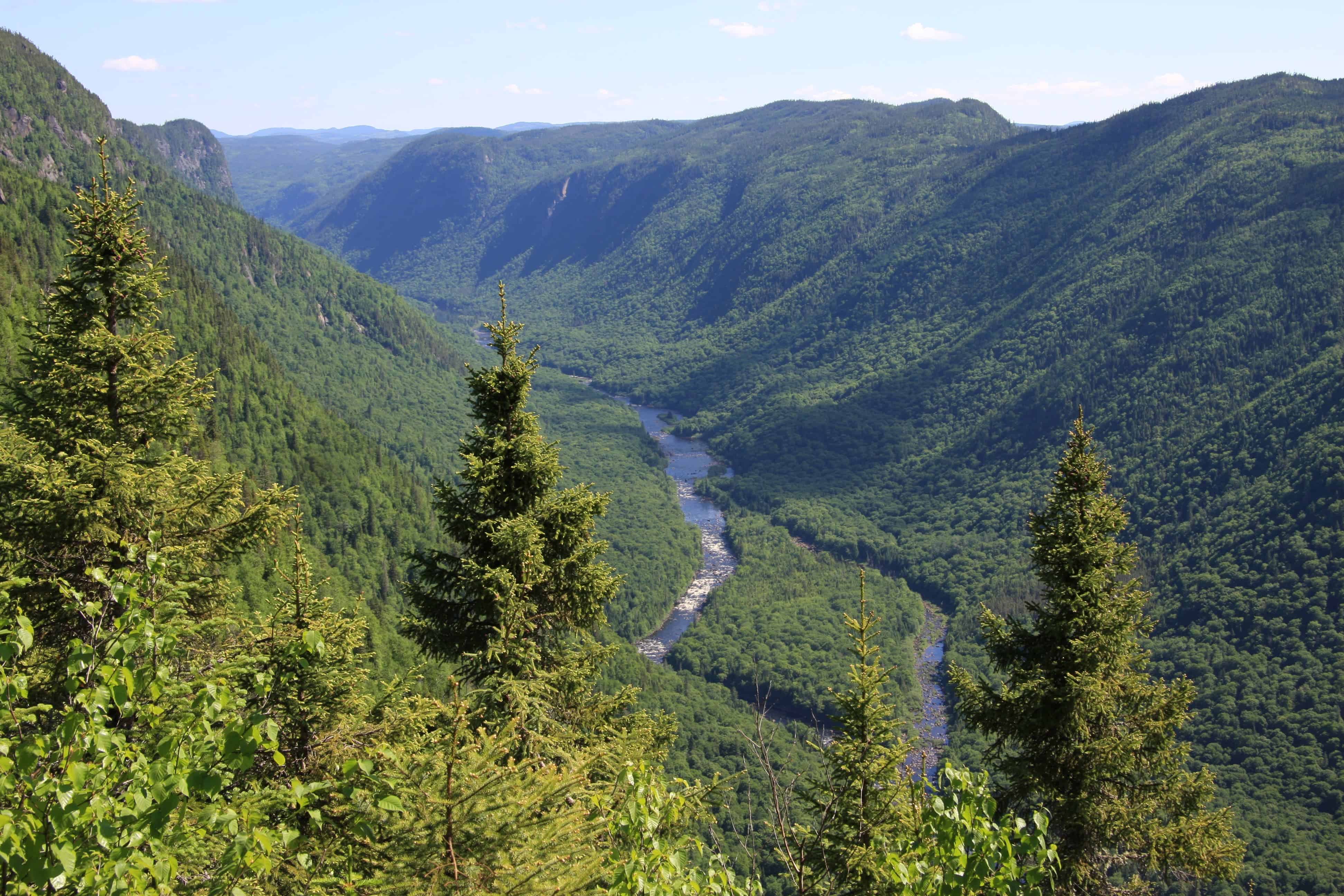 The world’s forests are incredibly diverse and act as a carbon sink! They should be protected for their beauty and functionality.

20 thoughts on “The different types of forests: everything you need to know”