So you perhaps thought that twins could be either identical or fraternal? But did you know that there are actually other types of twins besides these two mentioned? Of course, identical and fraternal twins are the ones we are more aware of because they are the ones we hear about most and are most likely to encounter.

The chances of having identical twins are of around 3 in every 100 births. When it comes to fraternal twins the chances are higher and are in fact around double. The incidence rate of twin births does vary from culture to culture and country to country. Twin DNA testing, available by a number of laboratories and companies including International Biosciences, is used to confirm whether twins are monozygotic or dizygotic and people sometimes seek a twin zygosity test prior to a blood transfusion or organ transplant (this is because identical twins make ideal donors to each other due to their same antigens). Whichever the case, twin births are far from common. But there are even rarer types of twins that you might not even have ever heard of. Let’s take a look at two very interesting, if not fascinating, twin phenomena. 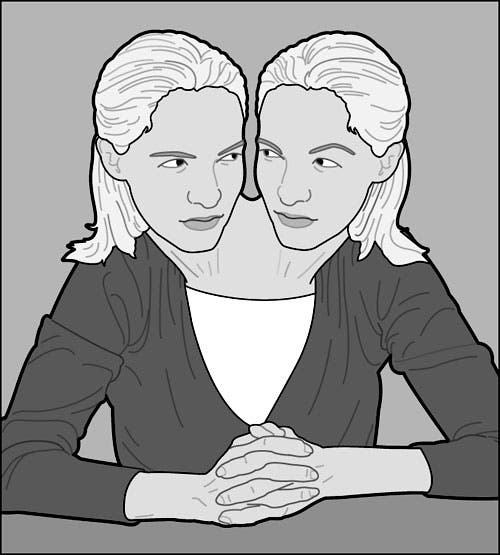 When we look at how twins are brought into the world we probably all know the following two basic facts:

So what is a chimera? A chimera twin is formed in a way which is analogous to non identical twins but with a curious twist. Two separate eggs are indeed fertilized by a sperm cell each BUT once the two eggs are fertilized they then fuse together. Yes, one individual kind of absorbs its brother or sister into itself. This means that the new individual formed has two copies of genetic material from two different individuals. A chimera twin can have different genetic profiles depending on which sample is collected and from which part of their body.

A well known case was that of Lydia Fairchild, who needed to prove her biological relationship to her children to get state benefit in the USA. DNA tests showed her husband was the father of the children but that she was not the mother. Eventually, her agonizing battle came to an end when she was found to be a chimera twin. This came to light when she gave birth to another child. A DNA test was conducted on the spot which showed that she was totally unrelated to the baby she just gave birth to.

So how rare is twin chimerism? The answer is “very” with only about 30 documented cases amongst humans world-wide. 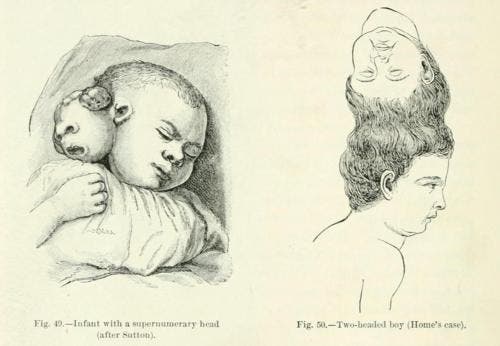 Illustration from the book “Anomalies and Curiosities”

Helen Burns is a qualified nurse working in the prenatal care unit of a private hospital. She has currently put her nursing career on hold to look after her two young kids. In her part time, she works as a writer specializing on topics relating to child birth and pregnancy. Helen regularly contributes articles to a number of info sites and blogs.