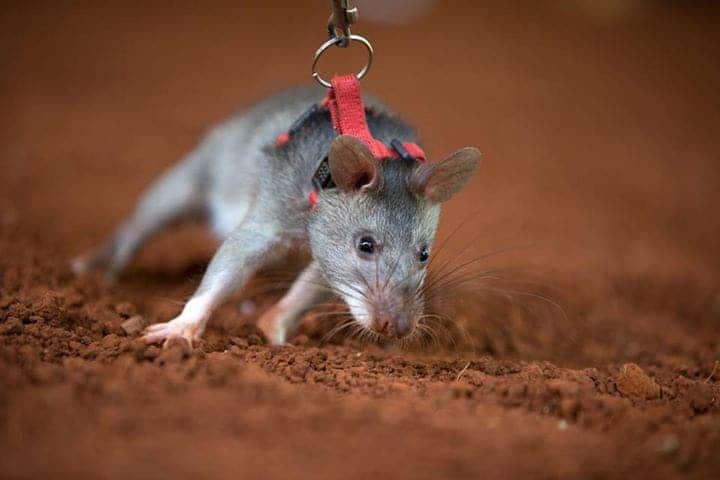 Though its last war ended in 1975 once with the retreat of the last American forces, Vietnam is still riddled with land mines that take their toll even decades later. More than one-third of the land in six central Vietnamese provinces is still littered with land mines and unexploded bombs from the Vietnam War, and in the past 39 years since the war ended more than 42,000 people have been killed by this lost ordinance. The same is true in countries like Thailand, Angola, Cambodia, Laos or most sub-Saharan African nations who have been devastated by countless internal feuds and struggles for power.

Detecting landmines can be difficult, dangerous and expensive, but an unsung hero is set to change all this — the African giant pouched rat.

In 1997, the Anti-Personnel Landmines Detection Product Development (APOPO) was launched, tasked with training so-called Hero Rats that can detect landmines and even tuberculosis with almost 100% accuracy. 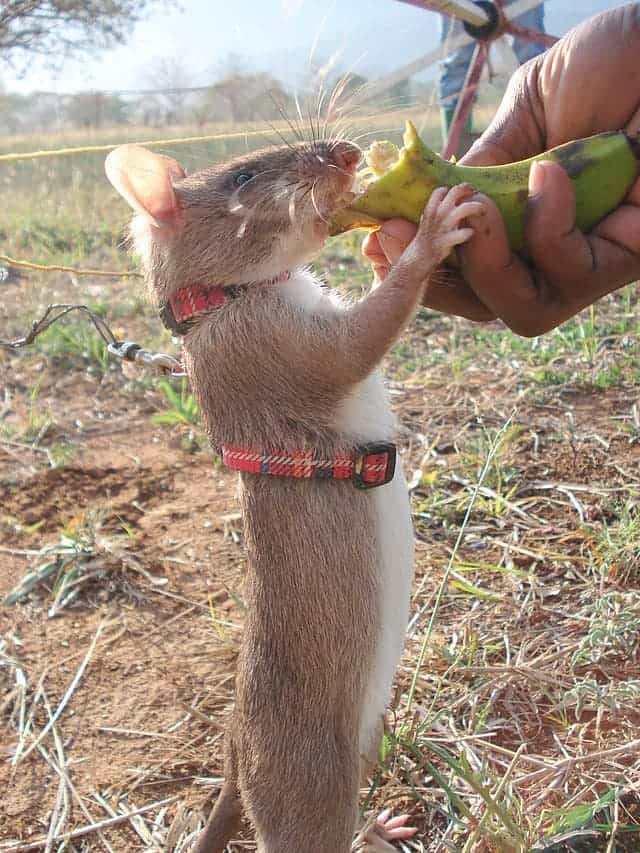 Hero Rat receiving a treat after a successful training round. Photo: APOPO.

The project was so successful that a spin-off project was launched to further exploit the rats’ uncanny sense of smell, training Hero Rats for tuberculosis detection. Only 54 rats have been trained for this role so far, but these are already working in 19 TB clinics in Dar es Salaam, Tanzania, where they’ve screened 226,931 samples and identified 5,594 TB patients since 2002. A rat can detect more TB samples in 10 minutes than a lab technician in a whole day! 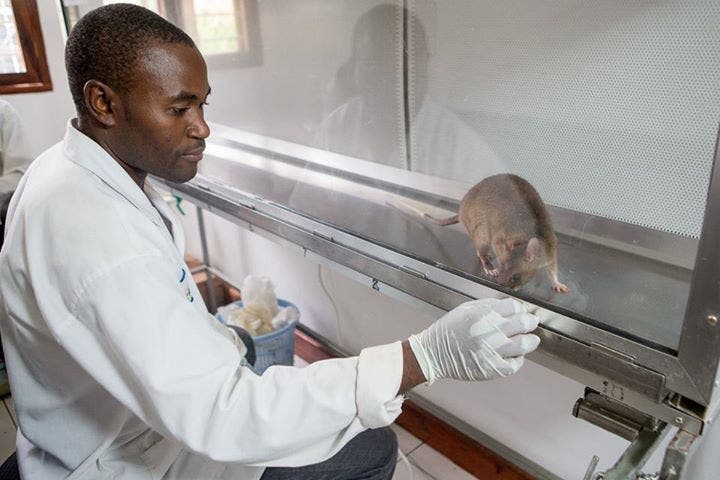 As you might have guessed from these pictures, these aren’t your typical rats. We’re all familiar with house rats (Muridae), but these animals belong a different family of species altogether called Nesomyidae. Adult African giant pouched rats grow to be around 0.9 meters (3 feet) long and 1.4 kilograms (3.1 pounds) in weight. They also have a sort of storage space inside their cheeks so they can keep food for later use. Yup, oversized gerbils!

Training rats for this sort of task isn’t easy, though. It takes nine months for a pup to grow into a Hero Rat, and not all of them make the winning lot.

The training first starts with making the rats feel adjusted with real working environments by exposing them to numerous stimuli like radios, flowers, coffee, and different surfaces such as grass, concrete, and soil.

“During one week, I will be taking the pups outside the kennels for about 20 minutes every day. I let them smell different odours like tea, coffee and oil, they get to hear different sounds like a ringing phone and human voices and they get to wander around on different surfaces as sand, wood, grass and concrete,” caretaker Albert Carol says at the APOPO website. “I make sure they are exposed to all kind of smells, textures and sounds, but especially to being handled by people. Every individual pup gets plenty of attention and learns to be held and carried by the trainers.”

The video below gives you a glimpse of how Hero Rat training looks like.

It’s important to note that the Hero Rats don’t get harmed. Anti-personnel mines are triggered when a certain pressure corresponding to an equivalent weight is sensed. Being too lightweight, the rats don’t trigger the mines, but they can sense the TNT and quickly alert professional who later diffuse them.

If you’d like to support the project, you can donate as little as $7 per month. You’ll then be granted access to a log on the APOPO website which will inform you of how your pet rat is doing in training half-way around the world.