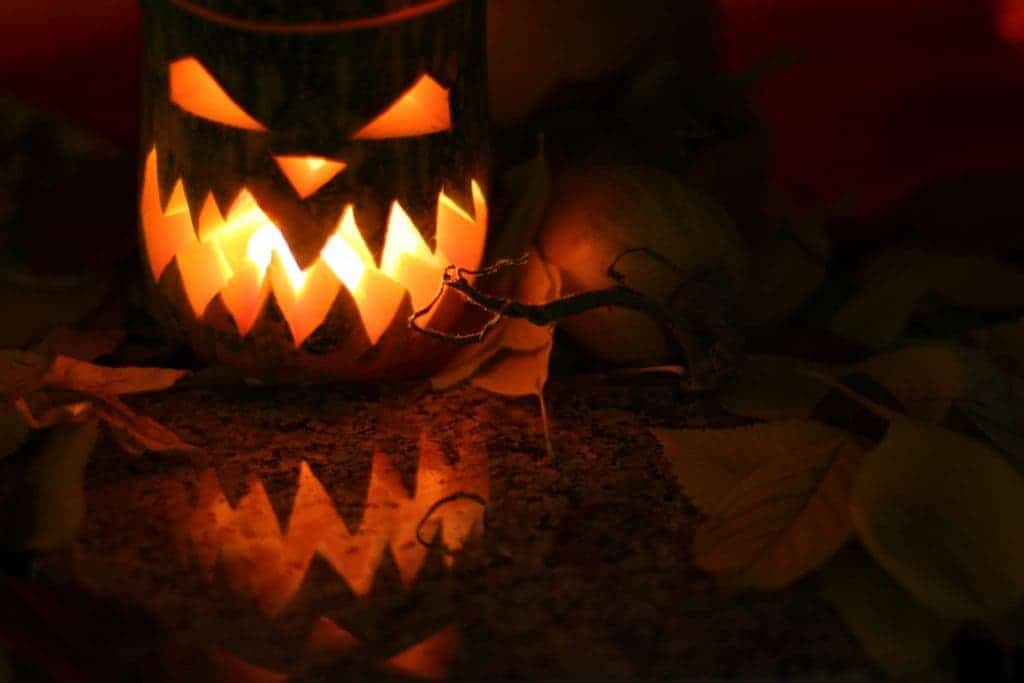 Every October, thousands and thousands of pumpkins are carved into scary shapes and lit up from the inside, but why do we even do that? Here, we take a look at how this tradition emerged and became so popular across the world.

The origins of Halloween

The origins of Halloween are actually connected to pagan beliefs, and don’t originate in Christian rituals, as many believe. Truth be told, today it’s kind of a hybrid celebration, incorporating both Celtic and Christian traditions.

Halloween was previously called “All Hallows’ Eve”, which already starts to give an indication about its origin. All Hallows’ Eve is a Christianized feast influenced by Celtic harvest festivals, with pagan roots in the Gaelic festival Samhain. Samhain was a festival marking the end of the harvest season and the beginning of winter or the “darker half” of the year. Traditionally, Samhain is celebrated from sunset on 31 October to sunset on 1 November, which is about halfway between the autumn equinox and the winter solstice. 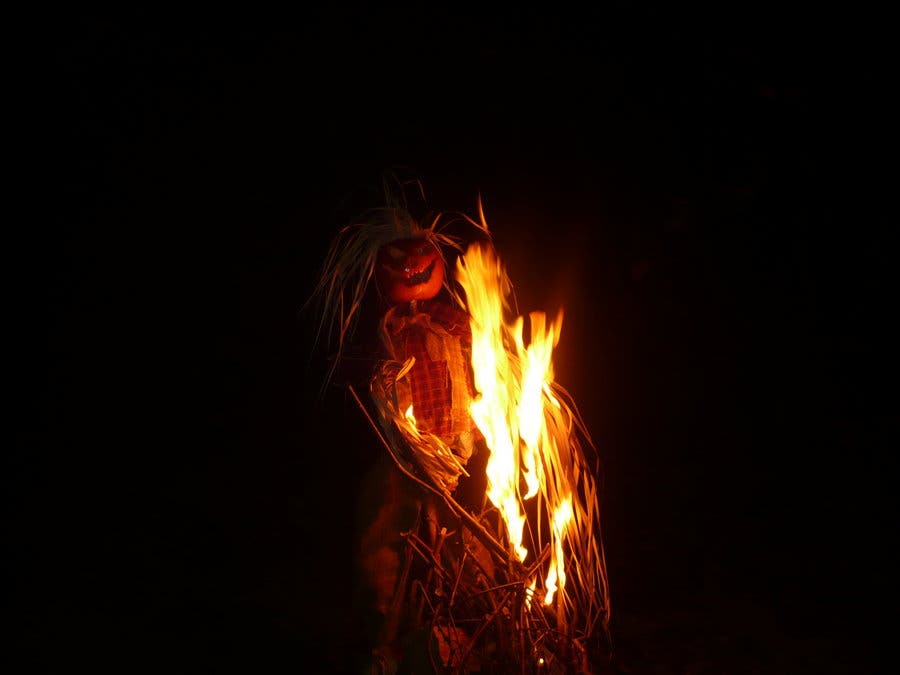 When the Christians expanded to Western Europe, they came across these Gaelic populations and wanted to convert them. However, they realized that if they tried to replace their celebrations, it’d be really difficult to convert them, so they just mixed two things together and created a hybrid celebration. The pagan harvest fest was blended in with the three-day observance of Allhallowtide, the time in the liturgical year dedicated to remembering the dead, including saints (hallows), martyrs, and all the faithful departed believers. Originally, no meat was eaten for All Hallows’ Eve, but today, abstinence from meat is not generally required, although eating certain vegetarian foods for this vigil day is still common, especially apples, colcannon, cider, potato pancakes, and soul cakes.

Which leads us to our question: why do we carve pumpkins?

Carved pumpkins (or in some cases, turnips), are called jack o’lantern. We don’t know for sure where this practice comes from, but it seems to come from an old Irish legend, the legend of Stingy Jack.

However, carving vegetables has been a common practice in many parts of the world; gourds are among the earliest domesticated plants, and there are some indications that they were carved as early as 10.000 years ago. Gourds were used to carve lanterns by the Maori over 700 years ago, and the Maori word for a gourd is actually used to describe a lampshade. However, today’s Halloween carvings likely occur from the British and Irish regions. So, what about Stingy Jack?

According to the story, Stingy Jack once asked the Devil to have a drink with him; weird, huh? Wait, it gets way better. True to his name, he didn’t then want to pay for his drink, which shows just how much nerve he had. He convinced the Devil to turn into a coin so that he could pay for the drinks, but when the Devil did turn into a coin, Jack decided to keep the money in his pocket, next to a silver cross – which prevented the Devil from turning back to his original shape. Jack eventually freed the Devil, under the condition that he would not bother Jack for one year and leave his soul alone.

Still, it gets even stranger.

Jack met up with the Devil and somehow managed to convince him to climb up a tree to pick up some fruit. He then sculpted a cross on the tree’s bark to prevent him from getting down, and forcing a promise that he will be left alone for ten more years, and his soul will not be claimed. Why didn’t he just ask him to be left alone for good, I don’t know. Jack was a strange guy.

But not long after that, Jack’s soul passed away. God didn’t really want the like of Jack in Heaven, so he sent him to hell. But the Devil was still upset by Jack’s tricks and he had to keep his word and not claim his soul. So instead, he sent Jack off into the dark night with only a burning coal to light his way. Jack put the coal into a carved-out turnip and has been roaming the Earth with ever since. He was called Jack of the Lantern, or for short – Jack o’lantern.

The people thought that by making their own lanterns to scare Jack off. In Ireland and Scotland, they used turnips or potatoes and placed them by the window. In England, large beets were used. The British and Irish that moved to the US took this tradition with them, and discovered that the pumpkin, a species native to America, works perfectly for that, so they used pumpkins instead. 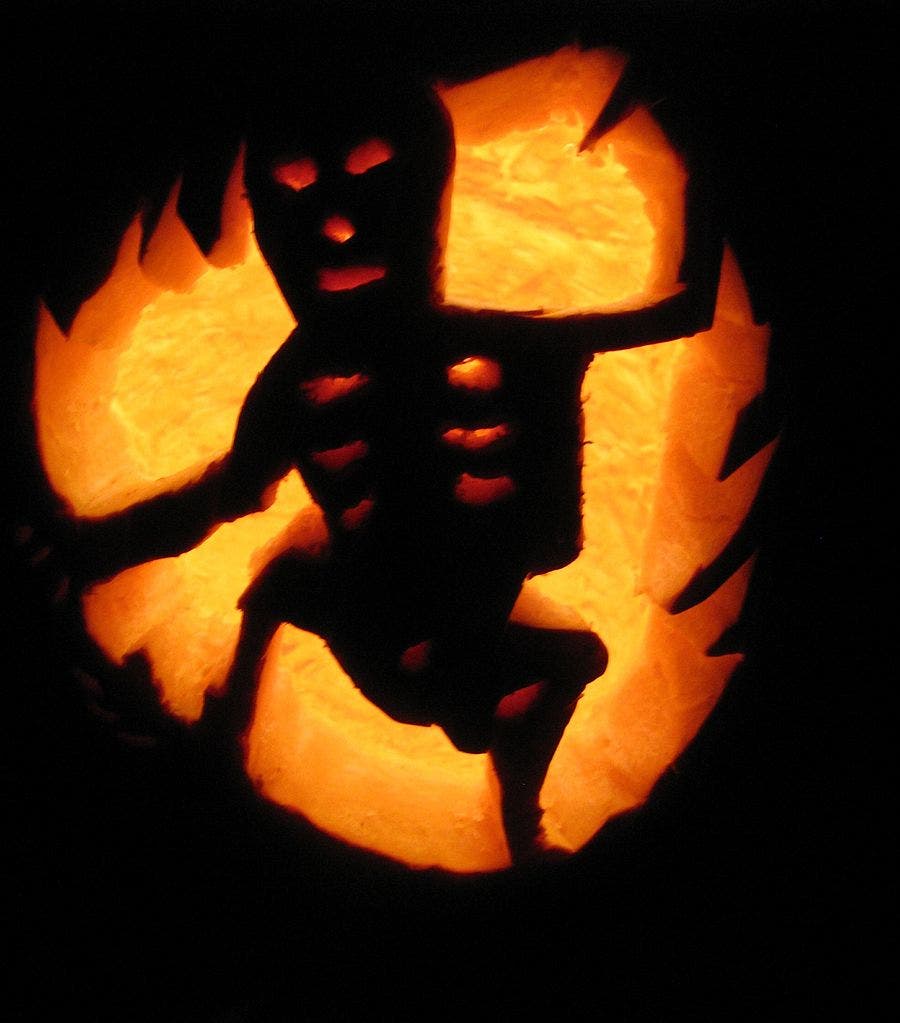 There are other similar (or different stories), but in all the stories, there’s someone that makes a deal with the Devil to have his soul free.

Today, carving pumpkins is as much an industry as it is a tradition. 1.5 billion pounds (680,000,000 kilograms or 680,000 tonnes) of pumpkins are produced each year are grown each year! Interestingly, 90 percent of the pumpkins grown in the United States are raised within a 90-mile radius of Peoria, Illinois, and even more interestingly, most pumpkins are processed into canned pumpkin and canned pie mix – not for carving. There are pumpkin carving competitions, and the scary faces traditionally made on pumpkins are often replaced by other creative designs. The world’s largest jack-o’-lantern was carved from the then-world’s-largest pumpkin on October 31, 2005 in Northern Cambria, Pennsylvania; it weighed 1,469 lb (666.33 kg) on October 1, 2005.

So, prepare your pumpkins and your carving knife, because we couldn’t really imagine Halloween without pumpkins, could we? It’s not about making the best ones, it’s about enjoying a century-old tradition; and keeping Jack o’lantern away.