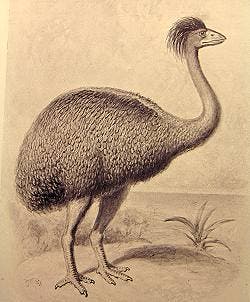 Once one of Madagascar’s crown inhabitants, the elephant bird (Aepyornis maximus) is considered the largest bird to have ever lived. The first records of the bird are from the 9th century when Saracen and Indian traders visited Madagascar and spoke of legends of the the giant roc (rukh). The elephant bird became rarer and rarer once with the settling of Madagascar’s coastal regions, then inner land, by Europeans until it eventually went extinct in the 17th century due to excessive hunting.

Aepyornis is believed to have been more than 3 m (10 ft) tall and weighed close to 400 kg (880 lb), making it the largest bird of its time. Related to ostriches and emus, the elephant bird evolved at a time when birds ruled the earth and had probably existed on Madagascar for 60 million years. Legends told of the fearsome roc which ate elephants – in truth, aepyornis was an herbivore. Even so, it had little to worry about predators thanks to its large size. When the situation called for, it could have also used its feet and heavy beak to protect itself in conflicts with others of its own kind. 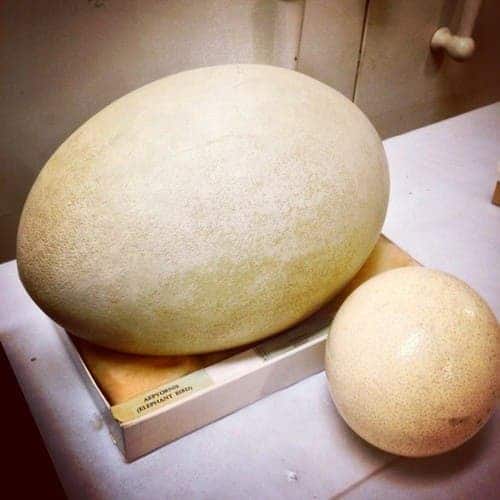 Their eggs had a circumference of about 3 ft (91 cm), were about 13 inches (33 cm) long and a capacity of 2 imperial gallons (9 litres). That’s about the equivalent of about 200 hen eggs or enough to make an omelette for 120 people from one single egg! It’s no wonder that European settlers hunted the bejesus out of these poor birds. The photo from above, showing an elephant bird egg next to an ostrich (Struthio sp.) egg will give you an idea of the scale we’re talking about.

Tales of the elephant bird reached many places of the world even in medieval times. Even Marco Polo is said to have witnessed the bird, as accounted in Ferdinand von Hochstetter’s book “New Zealand” from 1867.

“[..]Marco Polo already, in the famous account of his travels, locates the giant bird Rue of the myth upon Madagascar, and relates that the Great Khan of the Tartars having heard of this bird at the far off borders of the celestial empire, sent forthwith messengers to Madagascar. They really brought a feather back with them, 9 spans long, and 2 palms in circumference, at which His Majesty expressed his unfeigned delight. People laughed at this tale, as a fable, and like so many other relations made by Marco Polo on real facts, it was declared vain swaggering talk; – until tidings came establishing the fact, that very recently a gigantic bird was, and is still existing in Madagascar. This happened thus: Natives of Madagascar had come to Mauritius to buy rum; the vessels they had brought with them to hold the liquor were egg-shells, eight times as large as ostrich-eggs, or 135 times the size of a hen-egg; eggs containing 2 gallons. They related that those eggs were now and then found among the reeds, and that the bird also was occasionally seen. This was not believed either until the Museum at Paris in 1851 received such an egg from a landslip in Madagascar, measuring 2 3/4 feet in circumference, and holding 2 1/2 litres; it was in a state as though it had been laid but very recently. Now Marco Polo’s fabulous Rue has become the Aepiornis maximus of Madagascar. Yet that colossal egg, the casts of which are exhibited in almost every Museum in Europe, besides some fragments of bones in the British Museum, is all, that has hitherto been obtained of this bird. Whether it still lives, is uncertain. The natives assert to this day, that in the thickest forest, there still exists a giant bird; but that it is very rarely seen.” 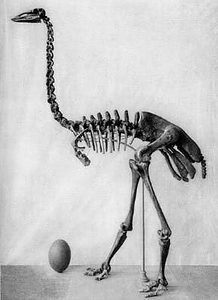 4 thoughts on “The elephant bird: the largest bird to have ever lived”