Mars is often called the ‘Red Planet’ for obvious reasons. But what gives our neighboring planet this distinct hue? While Earth is sometimes referred to as the ‘blue marble’ because it’s mostly covered in oceans and has a thick atmosphere, giving it a blue appearance, Mars is covered in a lot of iron oxide — these are the same compounds that give blood and rust their distinct color. In light of this, it’s no coincidence that Mars, which occasionally appears as a bright red ‘star’, was named after the Greek god of war. 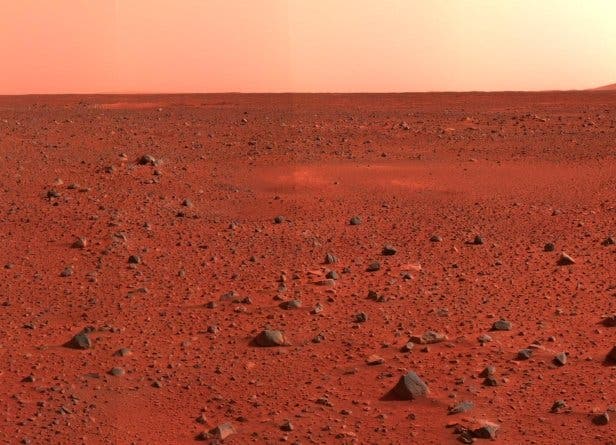 Its dusty, iron-rich surface gives Mars its famous red color. Beneath the dusty surface, which is anywhere between a few millimeters and two meters deep, there is hardened lava composed mostly of basalt. Credit: NASA

It’s not entirely clear how all that iron oxide wound up on the planet’s surface, but we do know that the planet formed some 4.5 billion years ago when debris, gas, and dust began coalescing. Among these materials was a lot of iron that was forged in the heart of long-dead stars.

Earth and Mars both have a lot of iron, but while the heavy elements sank to Earth’s core when the planet was still young and mushy, scientists think iron was less homogeneously incorporated into Mars due to its weaker gravity and smaller size. That’s not to say Mars doesn’t have an iron core as well, but there’s still a lot of the metal in the upper crust to be found.

Yet, iron by itself isn’t red — its color usually ranges from. What happened is that all of this surface iron became oxidized, forming iron oxide known more commonly as rust — a compound made of two iron atoms and three oxygen atoms. But why did so much of Mars’ surface iron get oxidized? Scientists aren’t sure, but there’s reason to believe this massive oxidation happened when Mars had flowing water and a thick atmosphere — possibly not too different from modern day Earth. Leaving an iron-rich pot or spoon outside or in water for a long time will make it rust. A very similar process covered Mars in iron oxide.

An alternate theory, first proposed by Albert Yen of NASA’s Jet Propulsion Laboratory and based on data gathered by the 1997 Pathfinder mission, says a great deal of that iron oxide comes from meteorites.

In 2009, Danish researchers performed a study which found water isn’t necessary to produce a lot of iron oxide. Instead, crumbling quartz crystals — the kind found in the Martian regolith — leaves oxygen-rich surfaces exposed. This could easily have happened during Martian dust storms, which are so intense that the dust they kick up can be seen with telescopes on Earth. Sunlight can also break down carbon dioxide and other molecules from the atmosphere, producing oxidants like hydrogen peroxide and ozone. 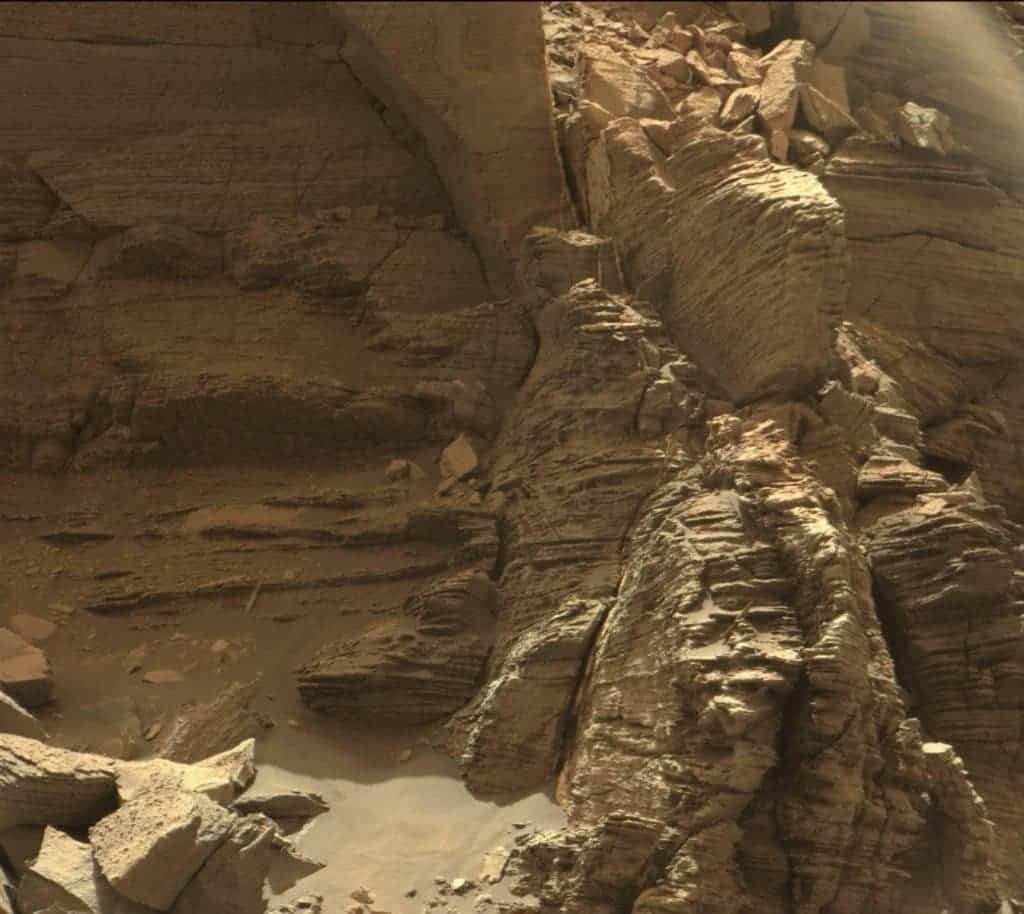 However, the entire planet is not red. Some regions look bright red, while others will appear black because not everything is covered in iron oxide dust. Thanks to the rovers NASA has landed on the planet, like Opportunity, Spirit, and Curiosity (the latest to touch down), we now have unprecedented images of just of Mars’ surface, but also of its subsurface. When the Phoenix Lander drilled just a few centimeters below the iron oxide rich surface, the ground was brown.

The sky on Mars is red, too 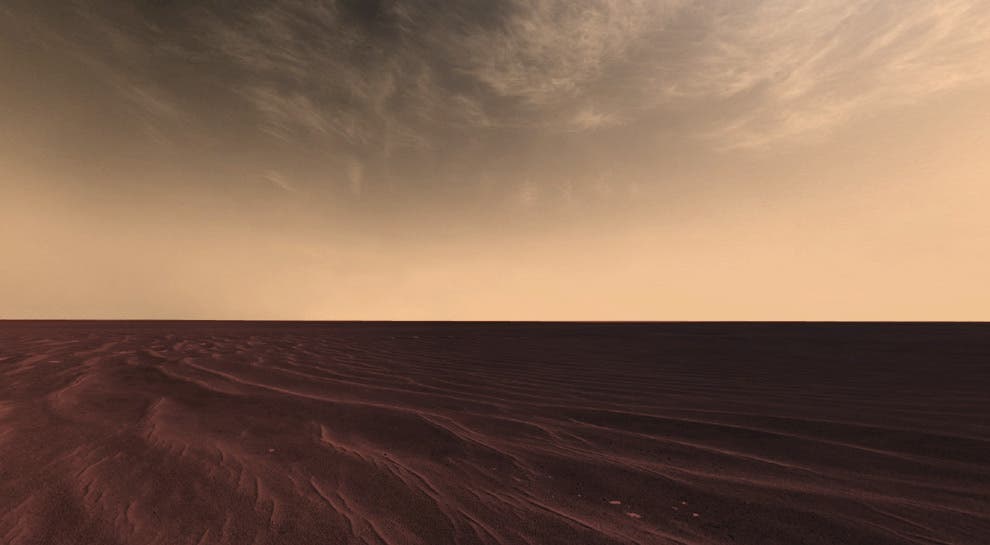 An exaggerated color image mosaic of images from NASA’s Mars Rover Opportunity. The clouds can be composed of ice made from either carbon dioxide or water and can move swiftly across the sky. (NASA/JPL/Cornell)

Earth’s sky appears blue because of a physical phenomenon called Rayleigh scattering. Because shorter wavelengths of light, like violet and blue, are scattered more by the molecules in the atmosphere, the blue photons appear to come from all directions. On Mars, the opposite is true because the dust that litters the planet’s light atmosphere scatters red photons, making the sky appear red. This can also happen on Earth when the air is heavily polluted or covered in smoke. 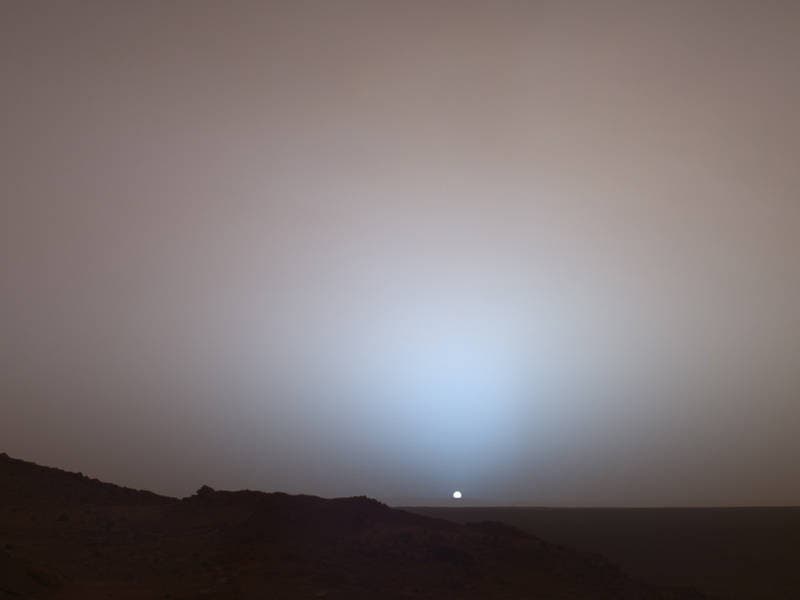 On May 19, 2005, NASA’s Mars Exploration Rover Spirit captured this stunning view as the Sun sank below the rim of Gusev crater on Mars. This Panoramic Camera mosaic was taken around 6:07 in the evening of the rover’s 489th Martian day, or sol. The colors are slightly exaggerated. Credit: Image Credit: NASA/JPL/Texas A&M/Cornell