Bono of U2 recently let it be known that he was a student of astrophysics (yes, truly!). Upon meeting the 2012 Nobel Prize winner for physics Brian Schmidt, Bono demonstrated a thorough understanding of Schmidt’s work on the evidence for an accelerating universe.

More and more over the last 100 years, scientists have been theorising about the very beginning of the universe – most of us have heard of the Big Bang – and also theorising about how it will end. These theories relate to lengths of time, and concepts that are so removed from the battles of our day to day ordinary lives that there is a kind of disconnect, and as a result we find it hard to understand how these theories could possibly be relevant to our lives. It was the late Douglas Adams’ genius to be able to identify this gulf and turn it into comedy gold, which he did in his famous ‘Hitchhiker’s Guide to the Galaxy’ books. 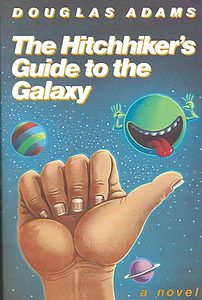 However, to astrophysicists imagining how the universe must end is a matter of great importance. Brian Schmidt, Saul Perlmutter and Adam Riess’s recent Nobel prizes were awarded for work that showed the universe is not only expanding but that it is expanding at an accelerating rate. Up until recently it was thought that the rate of expansion of the universe must be slowing – which would seem a reasonable assumption given that gravity from the denser, middle part of the universe should be pulling on the matter out toward the edges, and having a braking effect.

However Schmidt and co’s calculations show that instead of contracting, the universe is actually expanding at an ever increasing rate. If they are right the implication is that the universe will eventually be so spread out it will be a very lonely place indeed: “Human beings will look to an empty universe in 100 billion years, as all the galaxies will fade away except the Milky Way we live in,” said Schmidt. It should be noted that such an outcome would not bode well for Milliway’s.

Whatever dark matter actually is, its influence isn’t confined to galaxies – it has also influenced previous theories that once held favour, which have now been consigned to the wastebasket because of it. The Big Crunch is one notable casualty.

The Big Crunch was where the outward momentum from the Big Bang was finally arrested by gravity’s influence, and things then started to contract. Slowly at first, then faster and faster until, well…there is a big crunch.

It is a pity that the Big Crunch looks unlikely, because others had speculated that the Big Crunch might very well lead to another Big Bang. Adherents of this theory know it as the Big Bounce – a name that Adams would have been hard pressed to improve on.

Biology would appear to be a long way from astrophysics, but there is a new breed of biologists who posit that the law of physics known as negative entropy is a process that governs not only the development of galaxies but is behind the phenomenon of life as well (the physicist Erwin Schrödingerintroduced the concept of negentropy in his 1944 book What is Life?).

Negative entropy is where open systems progress toward ever greater order by using energy from outside their system. Thinkers as disparate as Teilhard de Chardin, Ilya Prigogine, Paul Davies and Jeremy Griffith see its influence operating at both ends of the spectrum: from the formation of galaxies, to the stirrings of life.

However the biologist that stands out from this group is the Australian Jeremy Griffith. While Griffith agrees that negative entropy is fundamental to understanding what life is, he is the only one to draw attention to the obvious disparity between this progression toward order in open systems, and the behaviour of humanity, namely humanity’s propensity to destructiveness, or less order. Indeed Griffith says “the real frontier for the human race–and most particularly for its designated vehicle for enquiry, science.” The real frontier, he says “was never outer space but inner space, the search for understanding of the human condition.”  He also suggests that understanding the ‘human condition’, our historical state of insecurity at being unable to reconcile the so-called good and evil within, is a necessary first step in allowing us to think effectively about all manner of things, saying that “finding understanding of our less-than-ideally-behaved, troubled condition is the crucial insight we need… [which will] enable us to safely entertain deeper thoughts on life, in particular thoughts such as what is life all about, [and] what is the meaning of life.”.

So while outer space certainly has some romance and excitement about it, and the thought of sitting in Milliway’s looking out over the edge of the abyss, with galaxies whirling to their death in the background, sure does give a tingle down the spine, it is in fact an avoidance of the real issue which is our own less-than-ideal behaviour. Beneath the humour of Douglas Adams was an acute awareness of the truth of what Griffith says, that without understanding ourselves first, everything else is folly.