Taking food away from C. elegans in larval stages suspends their development; while they still wiggle around and look for food, they are in a state of arrested development. However, when food becomes plentiful again, they start to develop normally – but live twice as long. 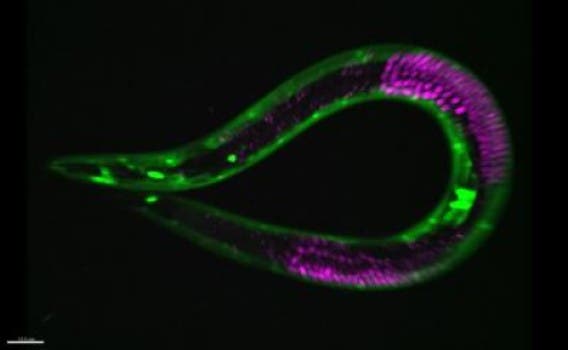 This remarkably simple way of achieving longevity is not entirely surprising. It has been known for quite a while that a low intake of nutrients and reduced cellular activity are generally linked with longevity – but doubling the lifespan only through a strict but temporary diet, that’s something quite surprising.

“It is possible that low-nutrient diets set off the same pathways in us to put our cells in a quiescent state,” said David R. Sherwood, an associate professor of biology at Duke University. “The trick is to find a way to pharmacologically manipulate this process so that we can get the anti-aging benefits without the pain of diet restriction.”

Sherwood and his colleagues from Duke University took a myriad of creatures and deprived them of food, in order to study the effects on longevity. They studied rats, mice, yeast, flies, spiders, fish, monkeys and worms; the effects on longevity varied between 30 percent to 200 percent, but in all cases, the lifespan was increased. Caenorhabditis elegans, a non-parasitic worm showed the most promise.

In nature, C. elegans often suffers from hunger, and its bodily development heavily depends on the available nutrients. But what researchers observed was that during the later stages of the larval development (known as L3 and L4), if they don’t have enough nutrients, they just stop developing. It’s as if they simply pause or slow down their development until they have sufficient nutrients around.

“Development isn’t a continuous nonstop process,” said Schindler, who is lead author of the study. “Organisms have to monitor their environment and decide whether or not it is amenable to their development. If it isn’t, they stop, if it is, they go. Those checkpoints seem to exist to allow the animal to make that decision. And the decision has implications, because the resources either go to development or to survival.”

Researchers starved the larvae for two weeks, and then fed them nutrients they would stumble upon in nature. What they observed was that the worms would develop normally after that – with their lifespans drastically increased.

“This study has implications not only for aging, but also for cancer,” said Sherwood. “One of the biggest mysteries in cancer is how cancer cells metastasize early and then lie dormant for years before reawakening. My guess is that the pathways in worms that are arresting these cells and waking them up again are going to be the same pathways that are in human cancer metastases.”