There’s few things I can think of that sound scarier that a genetically modified version of herpes simplex virus type 1, but apparently that’s exactly what researchers used to shrink tumors of the deadly skin cancer melanoma in a clinical trial, according to Amgen, which is developing the experimental cancer treatment. 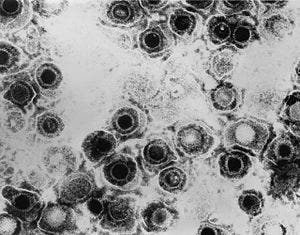 The virus is actually the same virus that causes cold sores. Patients in the trial were either treated with it, or a drug called GM-CSF. 16 percent of the patients treated with the virus saw a partial or complete shrinkage of their tumors for at least six months – it may not seem like much, but compared to the 2 percent from the classical drug trial group, it’s a big improvement.

Amgen, one of the world’s biggest pharma companies purchased the company that developed the virus, Biovex, in 2011 for $425 million in cash and a commitment to pay up to $575 million if Biovex’s medicines hit certain milestones. So far, they seem well on track to meet those milestones, and we may be looking at one of the better plans to fight cancer. We’ll just see what happens next.

“These are the first Phase 3 results of this novel approach to cancer therapy,” said Sean E. Harper, M.D., executive vice president of Research and Development at Amgen. “A high unmet need exists in melanoma and we believe the innovative mechanism of action of talimogene laherparepvec may offer a promising approach for these patients.”