Chronic inflammation of the colon has been recognized as a leading factor contributing to senescence and age-related diseases. Previously, scientists identified polyamines (PAs) levels, which are aliphatic low- molecular compounds, as being linked with systemic inflammation. The more PAs you have, the healthier your gut. But as we age, PAs levels fall and  intestinal barrier dysfunction may occur. To test how significant is this contribution, researchers from Japan fed mice with probiotic supplements than compared them to a control. They found the mice lived longer, suggesting “ingestion of specific probiotics may be an easy approach for improving intestinal health and increasing lifespan.” 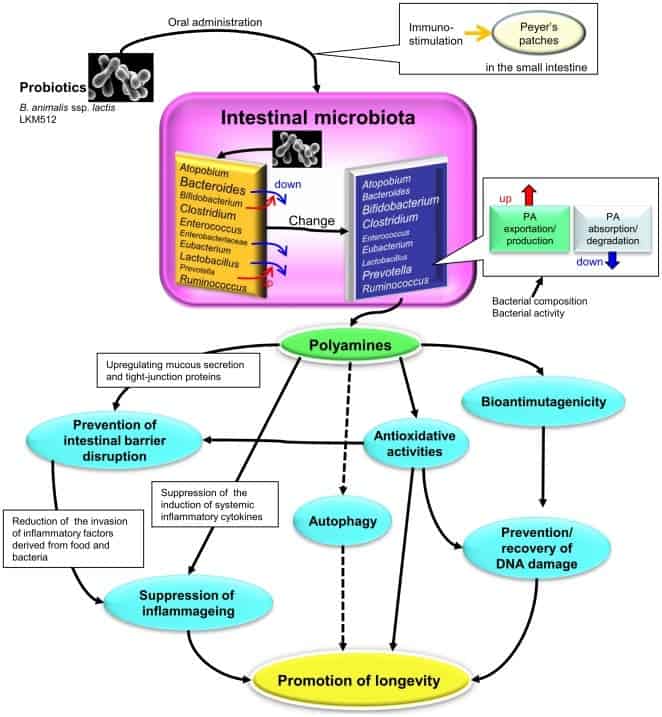 The hypothetical mechanism behind the increased lifespan of LKM512-treated mice. Image: Plos ONE

Each of us carries a microbiome, also known as the intestinal flora, made up of thousands of species of bacteria which individually outnumber our own  somatic and germ cells ten to one. We’re more bacteria than human, if we’re solely to look at the numbers. Luckily, most of the bacteria are our ‘friends’ – they help digest food and sometimes act as a second barrier keeping harmful species away. Some get past the immune system however and are harmful (i.e. they don’t live in symbiotic relationship with our body). In the healthy intestinal tract, the microbiota and the gut-associated immune system are assumed to share a fine and dynamic homeostatic equilibrium. When bacteria that cause inflammation of the intestines is present, though, this delicate balance is offset.

Although there’s yet to be a study that proves avoiding the chronic gut inflamation increase lifespan, the researchers at Kyoto University and the RIKEN Innovation center think there’s reason to believe this is true. This considering “1) the lifespan of germ-free mice is longer than that of conventional mice; 2_ intestinal microbiota undergoes alterations by ageing ; 3) intestinal microbiota stimulates host mucosal and systemic immunity; and 4), ageing-associated deterioration in intestinal barrier functions may permit increased systemic absorption of intestinal luminal antigens”.

The researchers split 10-month-old mice into two groups. The first received a stable diet which included the probiotic strain Bifidobacterium animalis (LKM512), while the other acted as a control. After almost twelve months, the researchers assessed that the LKM512-treated mice survived significantly longer than controls. At the same time, skin ulcers and tumors were more common in the control mice. Stool samples also show that PAs are significantly higher in LKM512-treated mice.

Previously, some other study showed eating yogurt containing LKM512 increases intestinal PA concentrations and decreased levels of acute inflammation markers in hospitalized elderly patients. Considering all the evidence collected thus far, it’s reasonable to believe LKM512 could also help humans live longer, though we’d have to wait for a clinical trial until we can know for sure.