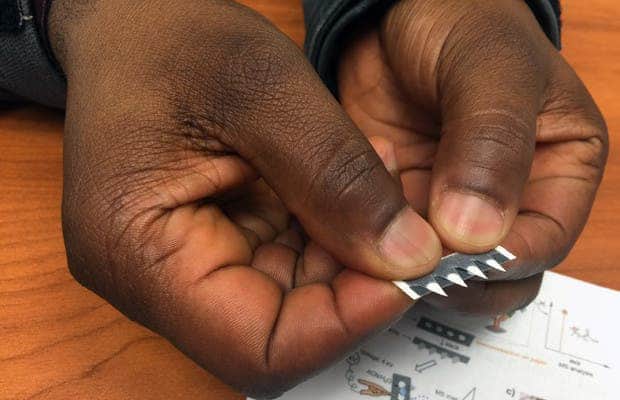 Chemists at the Ohio State University developed a paper strip technology that might save countless lives in rural Africa, and elsewhere where patients have poor access to medical services. The strip is very easy to use requiring only a few drops of blood and, used in conjunction with a spectrometer, can diagnose malaria and some forms of cancer. It only costs $0.5 to make, though it could be made even cheaper if production is scaled.

Lab-on-chip technology is a very hot topic in the medical fields because a score of diseases can be diagnosed simply by sampling a few drops of blood, particularly cancer. But while the malaria paper strips developed at Ohio State are very similar in function to lab-on-chip devices, these are far less complicated with no need for plasmonics, nano-fabrication, microfluids and surface chemistry. Instead, these more resemble pregnancy tests, and the researchers actually hope their paper strips become at least as popular.

“We want to empower people. If you care at all about your health and you have reason to worry about a condition, then you don’t want to wait until you get sick to go to the hospital. You could test yourself as often as you want,” said  Abraham Badu-Tawiah, lead author of the study published in the Journal of the American Chemical Society.

The paper strips are made from plain white paper stuck together with two-sided adhesive tape and run through a typical ink jet printer. Instead of regular printer ink, however, wax ink is used in order to trace various channels and reservoirs on the paper. Additionally, the wax seals the two layers of paper and keeps the blood samples inside. One strip test is about as large as a postage stamp. 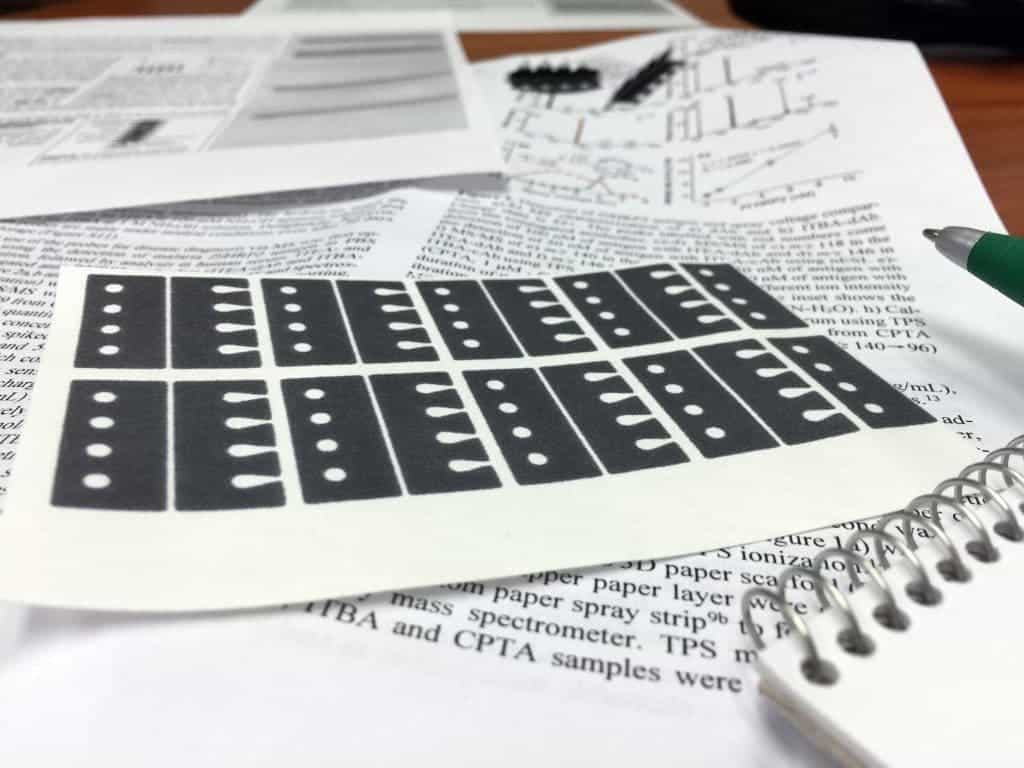 The paper strips can be made as easily as printing documents. The technology is currently pending a patent. Credit: Pam Frost Gorder, courtesy of The Ohio State University.

A patient who suspects a malaria infection needs only to prick a finger with a needle, leave some blood drops on the piece of paper, then fold it in half and mail it to the nearest hospital. Once at the hospital, a member of the staff peels the paper strips and holds them in front of a spectrometer. This device can detect the presence of certain chemicals based on their atomic characteristics, and, by extension, the presence of biomarkers in an infected person’s blood.

[panel style=”panel-warning” title=”Why this cheap paper strip is important” footer=””]Malaria is a mosquito-borne disease caused by parasites. The infection starts with flulike symptoms that can develop into kidney failure or other complications. The Centers for Disease Control and Prevention estimates that there were 214 million cases of malaria worldwide in 2015, and 438,000 people died—mostly children in Africa.[/panel]

A lot of things could happen from the moment a person mails the envelope with the blood sample that might ruin the readings. Luckily, the Ohio State University team devised their paper strips to work fundamentally different from other such tests.

A home pregnancy test, for instance, is coated with enzymes or gold nanoparticles that react with a sample and change colour accordingly. The enzymes are picky and if they’re not stored in the right conditions, at a constant temperature and without light exposure, the test will fail.

The malaria paper strip test, however, contains small synthetic chemical probes called ionic probes. These were designed to bind to specific antibodies, therefore extracting the disease biomarkers from the blood and onto the paper. These ionic probes are not influenced by humidity or even Africa’s scorching heat. Moreover, the team was able to detect malaria, ovarian cancer and intestine cancer from the paper strips even after storing them away for 30 days.

Considering it can withstand storage so long, it’s compact size and cheap price, the paper strips could open a new avenue of disease prevention and treatment, not just in rural Africa, but also in the rural United States. A cancer survivor, for instance, could mail these strips to his doctor every couple of months to check for remission, without having to drive many miles to a county hospital.

At this point, it’s worth noting that while the paper strips only cost 50 cents, the portable spectrometers required to read the diagnosis cost $100,000 onward. That might be prohibitive for many African hospitals, but with sound management practice, the cost can be offset. UNICEF estimates that malaria costs the continent $12 billion in lost worker productivity every year.

“Although this approach requires an initial investment, we believe the low-cost paper-based consumable devices will make it sustainable,” Badu-Tawiah said. “We can set one small instrument at a grocery store, then sell the paper strips for just 50 cents per test. The same for Africa, and perhaps much cheaper there.”