Did you know you may have chimp-like feet? Apparently, following an anthropological study, one in every thirteen people has some of the features seen in chimp feet, adapted for climbing trees. If you ever found yourself at ease climbing trees, you might just be one of these people closer resembling our primate relatives, feet-wise at least. 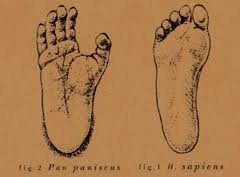 Traditionally, the human foot has been viewed as a rigid part, allowing for more efficient walking. Jeremy DeSilva and Simone Gill at Boston University, however, found that this isn’t entirely true. They asked 400 adults to walk barefoot around the Boston Museum of Science, and filmed them with high-resolution cameras at the foot level. They found 8 percent of people have some mid-foot flexibility, akin to tree-climbing apes.

Want to check if you have a flexible foot? Well if you can bend the ball of your foot, as well as the region halfway between your heel and the ball of your foot then your foot is ape-like – mine isn’t. All human feet have a joint at this point, however, for most of us, a stiff ligament keeps it rigid. Some have this ligament more relaxed and have a superior mid-foot bend.

The feature is hardly noticeable, though, since most people involved in the study were not aware of anything unusual, nor was their gait any different.

Flexible feet may be evolutionary remnants from our tree-dwelling times, and it’s likely that our feet had many more features adapted to climbing trees but were lost over time in favor of more efficient walking on two legs. Chimps’ legs, for instance, have  opposable toes for gripping. With this in mind, it’s peculiar that flexible feet still exist in such a large proportion today, considering humans have been walking for so long.

The researchers have a theory: flexible feet have resurfaced.  “My guess is that we are getting more variation than ever before, perhaps because shoes have impacted foot anatomy,” DeSilva says.

The findings were reported in the journal  Physical Anthropology.

4 thoughts on “One in thirteen people have chimp-like feet”