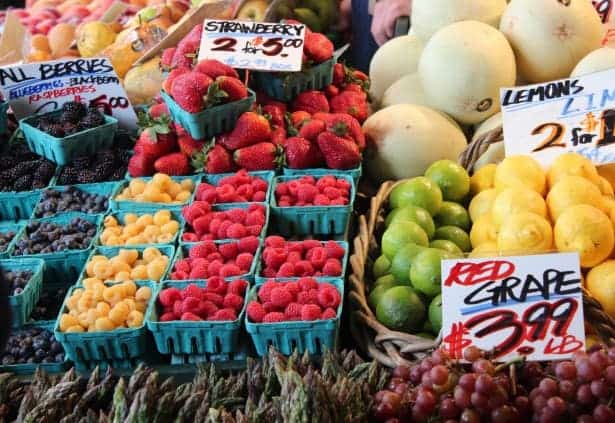 The bottom line — you should probably eat more fruits and vegetables.

Your mom was probably right: you should eat more fruits and veggies — you and millions of other people. Fruits and vegetables are an essential part of a healthy diet, serving as an excellent source of fiber, potassium, magnesium, antioxidants — all of which have been shown to improve health. They’re also associated with a lower incidence of obesity and diabetes, which also carry multiple health risks.

A new study finds that insufficient intake of fruits and veggies is responsible for around 23% of all cardiovascular (CVD) fatalities. Low fruit intake was associated with nearly 1.8 million cardiovascular deaths in 2010, while low vegetable intake was associated with 1 million deaths, according to researchers. In terms of both fatalities and intake, the toll of insufficient fruit consumption was double than that of vegetables.

“Fruits and vegetables are a modifiable component of diet that can impact preventable deaths globally,” said lead study author Victoria Miller, a postdoctoral researcher at the Friedman School of Nutrition Science and Policy at Tufts University. “Our findings indicate the need for population-based efforts to increase fruit and vegetable consumption throughout the world.”

Nutrition is extremely complex and often times, studies can sometimes seem contradictory, but the science has been remarkably consistent when it comes to fruits and vegetables: they’re good for you. Replacing them with processed foods, or things like meat and dairy, often has substantial and long-lasting negative effects. The study authors call for increased availability and promotion of fruits and vegetables, so that people can be encouraged to incorporate more of them into their diet.

“Global nutrition priorities have traditionally focused on providing sufficient calories, vitamin supplementation and reducing additives like salt and sugar,” said senior study author Dariush Mozaffarian, dean of the Friedman School of Nutrition Science and Policy at Tufts University. “These findings indicate a need to expand the focus to increasing availability and consumption of protective foods like fruits, vegetables and legumes–a positive message with tremendous potential for improving global health.”

So how much fruits and veggies should you eat? 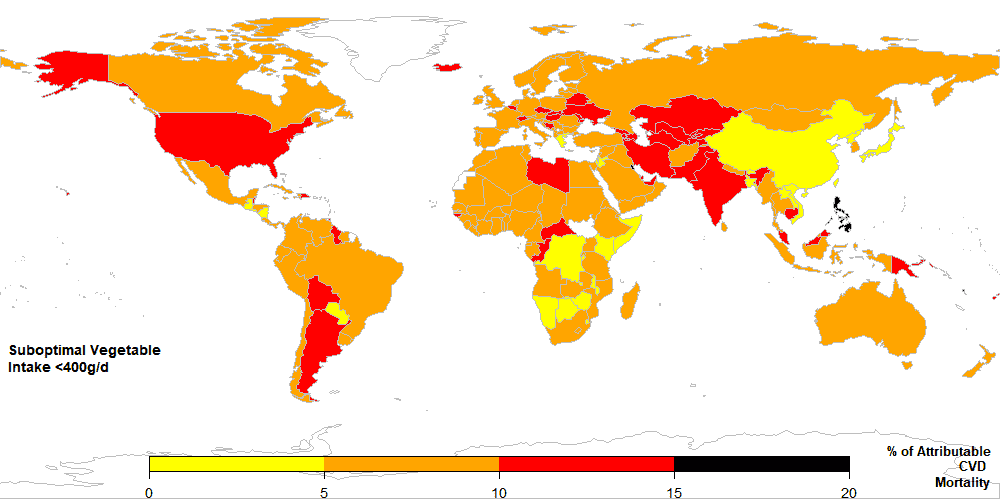 In the United States, suboptimal vegetable intake may account for 82,000 cardiovascular deaths while suboptimal fruit intake may account for 57,000 deaths. Cardiovascular disease is the number one cause of death in the United States and worldwide. Image credits: Global Dietary Database 2010/Friedman School of Nutrition Science & Policy at Tufts University.

The dietary guidelines vary slightly from country to country, but they all seem to hover around 300 grams per day for fruit consumption — the equivalent of about two apples. Meanwhile, veggie consumption should come at 400 grams per day — about three carrots (this includes all fruits and vegetables, including legumes).

Naturally, the impact of insufficient fruit and vegetable consumption was greatest where the consumption was lowest. Countries like the US, India, and several countries in Eastern Europe have a higher impact than places such as China or Western and Northern Europe.

There were also important differences based on age groups, seeming to disproportionately affect younger adults. Men were also more affected, presumably because women tend to eat more fruits and vegetables.

The findings have not been peer-reviewed and will be presented at the Nutrition 2019 conference, where they were selected by a committee of experts. This is the most comprehensive study of its kind to date.

“Inadequate fruit and vegetable intake contributes to cardiovascular diseases (CVD), and the impacts of fruits and vegetables on CVD risk worldwide has not been well established by country, age, and sex. Our objective was to derive comprehensive and accurate estimates of the burdens of CVD attributable to fruit and vegetable consumption using the largest standardized global dietary database currently available,” the study’s abstract reads.

The results paint a worrying picture, but there is also some good news: increasing consumption of fruits and veggies is, at least in theory, pretty easy. Each and every one of us can make this decision every day. Increasing consumption at a wider scale, which is what researchers are suggesting, remains much more challenging, but a thorough assessment is the first step.