Taking a page from the oil industry “sponsorship” philosophy, Coca Cola spent millions funding scientists to say that soft drinks don’t make people fat. While there’s nothing inherently wrong with a company funding scientists to study its products, when the result is already known before the study actually starts, that’s not exactly science – that’s manipulation.

As a NY Times inquiry revealed, Coca Cola, the world’s largest producer of sugary beverages has spent millions funding influential scientists to convince people that they shouldn’t cut back on their Coke intake. The American branch of the company launched the Global Energy Balance Network (GEBN), marching forth on the idea that fast food and soft drinks don’t contribute to obesity.

Now, for the sake of actual science, let’s get this out of the way first: a big glass of Coke has about 140 calories, while the same amount of orange or apple juice has almost 170 calories – so from a strictly caloric point of view, Coke really isn’t that bad; but there’s much more to health and weight than calories. 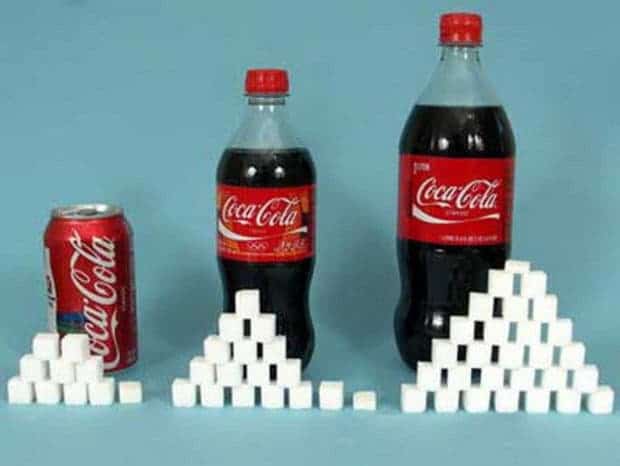 Yes, that’s how much sugar there is in a can/bottle of Coke. Image via ABC.

A quick search on Google Scholar (the largest aggregator of peer reviewed studies) reveals some 40,000 studies about soft drinks and obesity, and there’s a big connection between the two. Sugary drinks increase the risk of obesity, diabetes, heart disease, and gout. For example, a 20-year study on 120,000 men and women found that people who increased their sugary drink consumption by one 12-ounce serving per day gained more weight over time than people who did not change their intake. (link) Other studies have found a significant link between sugary drink consumption and weight gain in children. (link) One study found that for each additional 12-ounce soda children consumed each day, the odds of becoming obese increased by 60% during 1½ years of follow-up. (link) I could go on much longer here, but you probably get the point. These drinks don’t automatically make you fat, but they certainly contribute to the problem and they increase the risk not only for obesity, but for a myriad of other health issues.

This is why Coke’s stance is immoral and inaccurate at the very least. In a series of videos scientists have released while receiving funding from Coca Cola, they claim that “fitness trumps fatness”. In other words, what you eat and drink is not so important if you just work out. Steven Blair, Professor in the Departments of Exercise Science and Epidemiology and Biostatistics at the Arnold School of Public Health and founder of GEBN declared in a recent video: 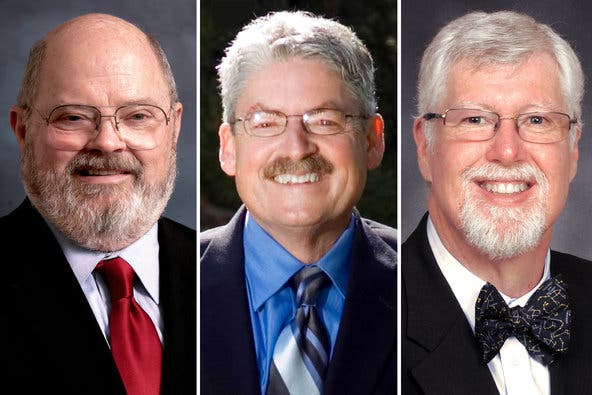 Well… the problem is that there is, in fact, a lot of compelling evidence that that is the cause. There are literally thousands of studies documenting that that is the cause. Furthermore, there are several studies (including a very recent one by a group of cardiologists led by Dr Aseem Malhotra of Frimley Park Hospital and the Academy of Medical Royal Colleges) which found that you simply can’t out-fitness a bad diet. Malhotra took specific aim at Coca Cola in his paper.

“Coca Cola, who spent $3.3 billion on advertising in 2013, pushes a message that ‘all calories count’; they associate their products with sport, suggesting it is ok to consume their drinks as long as you exercise. However science tells us this is misleading and wrong. It is where the calories come from that is crucial. Sugar calories promote fat storage and hunger. Fat calories induce fullness or ‘satiation’,” they write in the study. 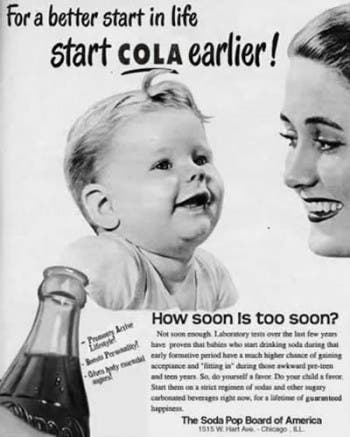 Yes, this was actually a Coca Cola ad. Image via Progressive Parent.

They also explain that money and public opinion have mixed in with science, with the former sometimes overshadowing the latter.

“The public health messaging around diet and exercise, and their relationship to the epidemics of type 2 diabetes and obesity, has been corrupted by vested interests. Celebrity endorsements of sugary drinks, and the association of junk food and sport, must end. The ‘health halo’ legitimisation of nutritionally deficient products is misleading and unscientific.”

Another very rigorous of physical activity and weight loss, published in the journal Obesity, recruited 200 overweight, sedentary adults and put them on an aggressive exercise program without changing their diets. After a year, the men had lost an average of just 3.5 pounds, the women 2.5. Almost everyone was still overweight or obese.

“Adding exercise to a diet program helps,” said Dr. Anne McTiernan, the lead author of the study and a researcher at the Fred Hutchinson Cancer Center in Seattle. “But for weight loss, you’re going to get much more impact with diet changes.”

But then again, there’s also the money. In response to a request made under the state Freedom of Information Act, the University of South Carolina disclosed that Dr. Blair had received more than $3.5 million in funding from Coke for research projects since 2008. That’s a lot of funding – and that’s pretty much the definition of a conflict of interests.

Last week, the Pennington Biomedical Research Center in Louisiana announced the findings of a large new study on exercise in children that determined that lack of physical activity “is the biggest predictor of childhood obesity around the world.” However, the news release contained a disclosure: “This research was funded by The Coca-Cola Company.” Taking all of the elements above into consideration, it’s really hard to take that study seriously.

But wait, it gets even better, a recent release sounded like this:

“The media tends to blame the obesity epidemic on our poor eating habits,” one recent news release states. “But are those french fries really the culprit? Dr. Steve Blair explains that you shouldn’t believe everything you see on TV.”

Those french fries sure well aren’t helping, mister Blair! Of course, no one is claiming that working out isn’t important, or that sedentary life isn’t a big issue, but it’s high time we started eating smarter – and Coke should be on no smart diet.