They’re using the people we like to sell us things that aren’t good for us. 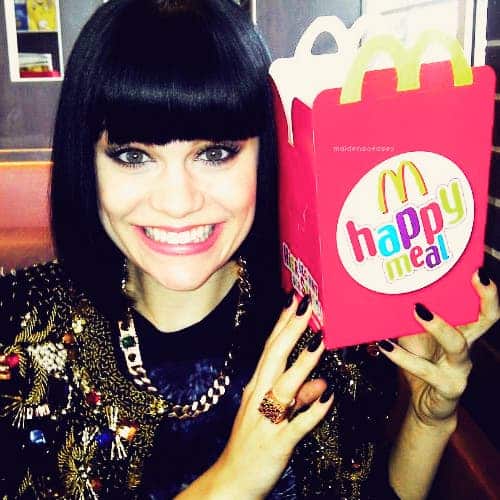 I’m sure Jessie J is a big fan of McDonalds.

Celebrity endorsements are often a multi-million dollar deal, but the products they want to sell are often unhealthy. Especially as the world is facing an obesity crisis, these deals designed specifically to encourage people to consume products like McDonalds or Coca-Cola are worth looking at. A new study from the New York University did just that, and analyzed what pop stars are trying to sell us – spoiler alert, it’s sugary drinks, fast foods and sweets.

The only star they found advertising healthy foods is PSY, known for his ‘Gangnam Style.’ Other than that, Britney Spears is trying to sell McDonalds and Pepsi, Katy Perry is working with Pepsi and PopChips, while Maroon 5 are advertising Coca-Cola and Snapple.

“Because of our nation’s childhood and teenage obesity public health crises, it is important to raise awareness about how companies are using celebrities popular with these audiences to market their unhealthy products,” said lead researcher Marie Bragg. “Research has already shown that food advertising leads to overeating, and the food industry spends US$1.8 billion per year marketing to youth alone.”

That’s right, $1.8 billion is invested every year in selling young people food, and most of it is unhealthy. The study wanted to see just how music stars fit into this picture, so they analyzed Billboard’s ‘Hot 100′ song charts from 2013 and 2014 to make a list today’s successful acts, they then catalogued 15 years’ worth of endorsements recorded between 2000 and 2014. They also took into consideration Youtube and other online media.

What they found was that in total, 65 pop stars had made deals with 57 different food and beverage brands. The biggest deal was Beyonce’s with Pepsi, estimated to be worth $50 million. Meanwhile, Justin Timberlake’s “I’m loving it” affair with McDonalds comes in at $6 million. The list also included Baauer, will.i.am, Maroon 5, Britney Spears, Pitbull, Jessie J., Chris Brown, Snoop Dogg, Shakira, Katy Perry, and many more. This is a summary of their deals: 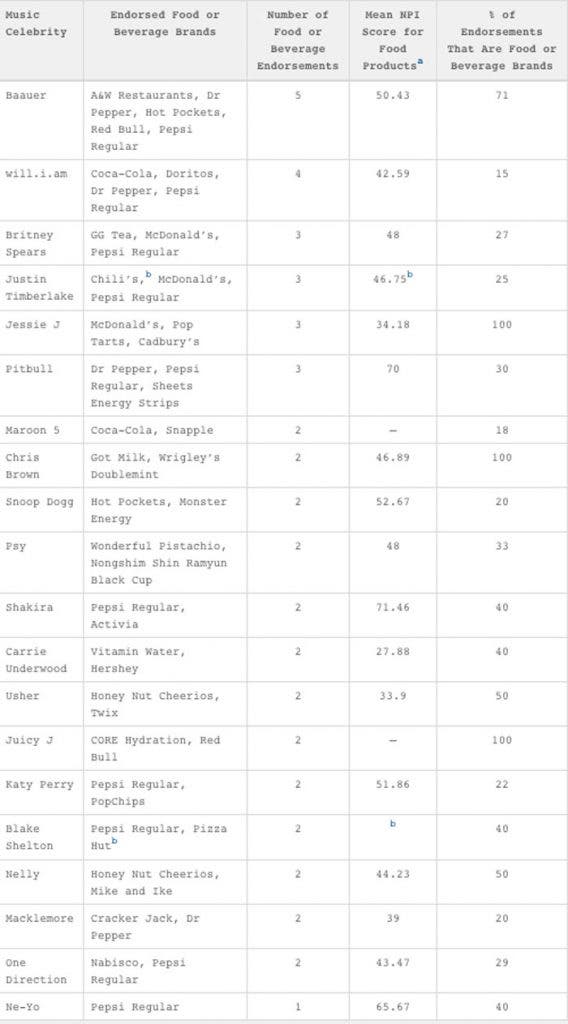 Now, I’d imagine that most people understand that Macklemore isn’t necessarily a Cracker Jack fan and that Justin Timberlake doesn’t munch on McDonalds all day, but the problem is that most consumers aren’t rational, and the youth can be especially naive and influenceable.

Unfortunately, celebrities are using their influence to sell unhealthy foods, because that’s where the money is. They may be role models for many kids, but at least when it comes to nutrition, they’re not using their status to promote the right things.

“The popularity of music celebrities among adolescents makes them uniquely poised to serve as positive role models,” said one of the researchers, Alysa N. Miller. “Celebrities should be aware that their endorsements could exacerbate society’s struggle with obesity – and they should endorse healthy products instead.”