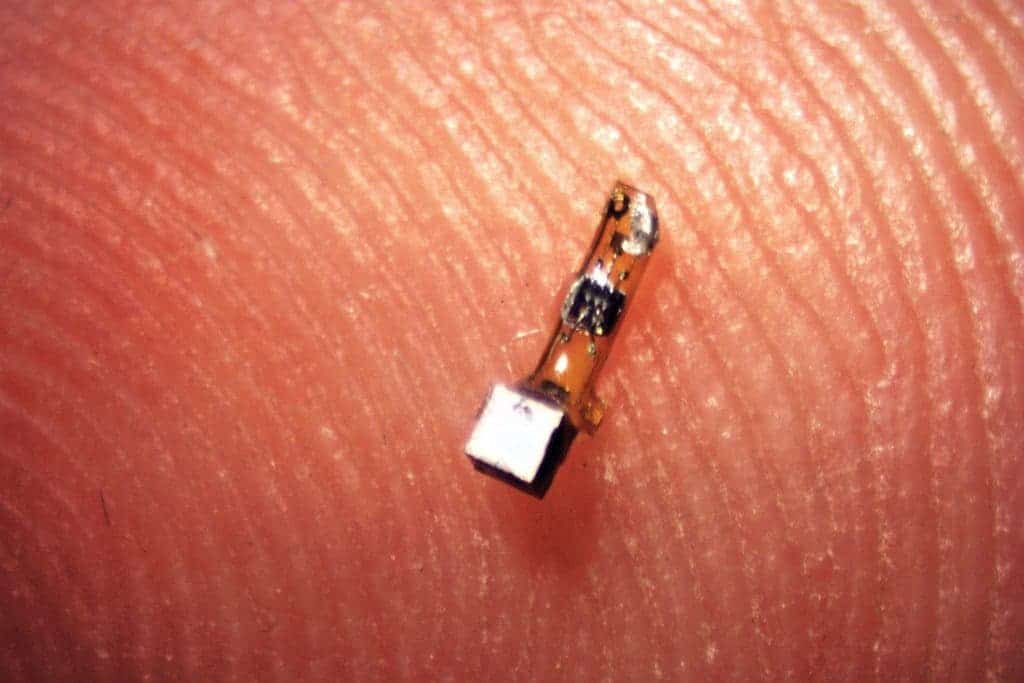 The dust-sized sensor is so small it’s on scale with fingerprints. Credit: Ryan Neely

The first dust-sized sensors were recently demonstrated by a team from UC Berkeley, United States. These can be implanted in the human body to relay back vital signs or even trigger actions. Scientists claim the battery-free neural dust motes can monitor internal nerves, muscles or organs — all in real time.

As far as internal body sensors are concerned, one of the prerequisites is to make them as small as possible. For some applications, like neural sensors, these sensors have to be even smaller than the diameter of a blood vessel. There’s only so much you can get away with miniaturization, though.

A sensor typically needs a battery to power it or some sort of power supply, an antenna to transmit and receive information, circuitry, not to mention the actual sensing electronic instruments. When faced with this sort of challenges, it really boils down to solving the weakest link in the chain — namely cut down on the most voluminous component of your sensor. In most cases, this is the power supply.

The UC Berkeley managed to scrap batteries altogether by using a piezoelectric crystal that converts ultrasound vibrations from outside the body into electricity to power a tiny, onboard transistor. The same physical phenomenon is being exploited in California to generate electricity from cars driving over highways. 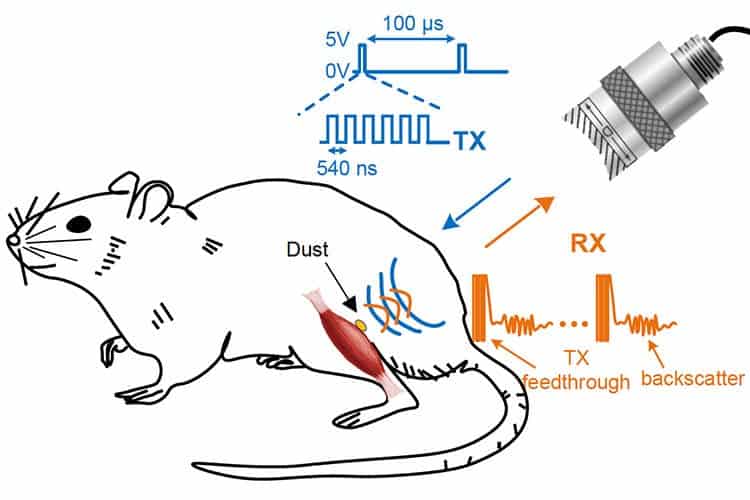 Ultrasound pulses both power and read out measurements. . The backscatter signal carries information about the voltage across the sensor’s two electrodes. Credit: UC Berkeley

The transistor is in contact with biological tissue, say a nerve or muscle, and when the ultrasounds cause it to spike a voltage, the biological fiber alters the piezoelectric crystal’s vibration. This vibration changes the ultrasound echo which is picked up by a receiver, typically the same device that generates the initial ultrasound pulse in the first place. So, the ultrasounds both power and read out the measurements — very clever! Ultrasounds are also more efficient than radio waves, the UC Berkeley researchers claim.

This is how scientists were able to monitor the muscles and peripheral nerves of rats: with these tiny motes measuring only one cubic millimeter. The passive sensors were powered up every 100 microseconds with six 540-nanosecond ultrasound pulses.

For this particular experiment, the team covered the motes with surgical-grade epoxy, but the next version will be coated with biological compatible films. They also want to make the sensors — currently the size of a grain of sand — even smaller. The goal is to make them no larger than 50 microns on a side or half the width of a human hair. At this scale, the specks could be small enough to nestle up to nerve axons and record their activity. 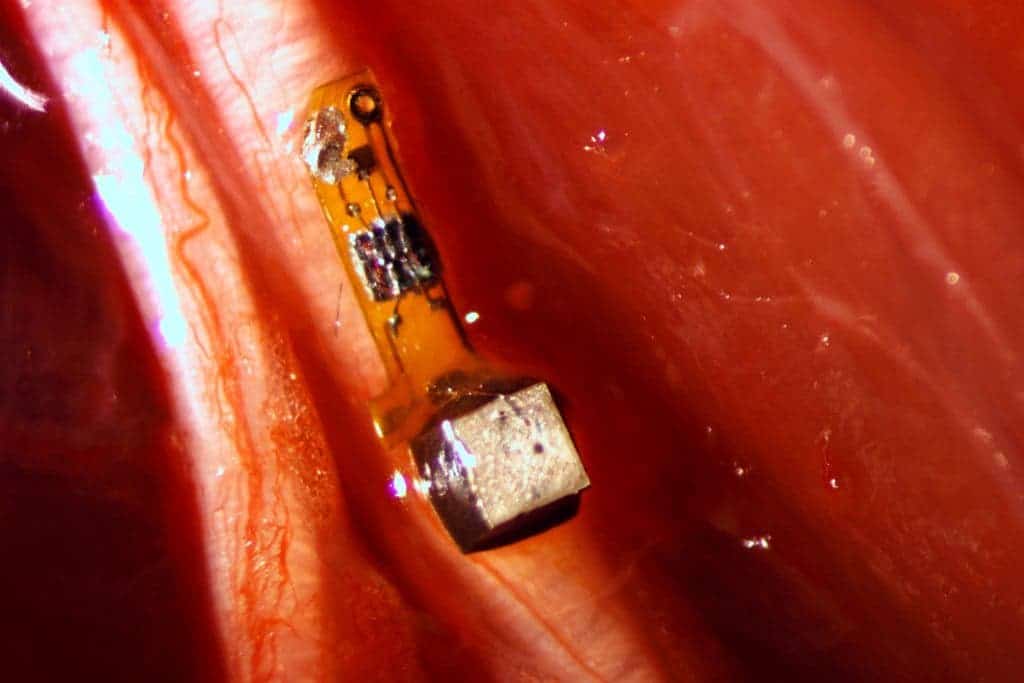 The sensor, 3 millimeters long and 1×1 millimeters in cross section, attached to a nerve fiber in a rat. Credit: University of California, Berkeley

One of the most promising application is in brain-computer interfaces, such as the ones currently being experimented to help paraplegics control prostheses with their thoughts, just like the biological counterparts. Although great progress can be made with non-invasive devices like electroencephalogram caps, the best results are achieved with electrodes that have to be implanted straight in the brain. This, of course, involves drilling the skull. Moreover, these electrodes wear out after only one to two years.

Such electronic motes could also be highly useful as electroceutical devices — special gear used in therapy for epilepsy or to stimulate the immune system or tamp down inflammation.

“The original goal of the neural dust project was to imagine the next generation of brain-machine interfaces, and to make it a viable clinical technology,” said neuroscience graduate student Ryan Neely. “If a paraplegic wants to control a computer or a robotic arm, you would just implant this electrode in the brain and it would last essentially a lifetime.”

“The beauty is that now, the sensors are small enough to have a good application in the peripheral nervous system, for bladder control or appetite suppression, for example,“ Carmena said. “The technology is not really there yet to get to the 50-micron target size, which we would need for the brain and central nervous system. Once it’s clinically proven, however, neural dust will just replace wire electrodes. This time, once you close up the brain, you’re done.“

The findings appeared in the Neuron Journal.