Most of the time, when you’re sick, you want to deliver drugs and imaging agents to diseased cells or tumours where they’re needed most – that’s a problem researchers have solved quite a while ago, we can get particles pretty much wherever we want to. The thing is, most of the time, these agents are stopped by your immune system, which of course, can’t recognize them, and therefore, treats them as enemies. 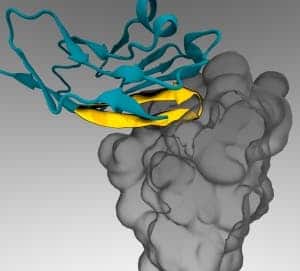 Researchers at the University of Pennsylvania in Philadelphia have now found a way to stop macrophages (specialized cells that attack foreign substances, infectious microbes and cancer cells through destruction and ingestion) from destroying drug-bearing nanoparticles. They have created a peptide that sneaks drug-bearing nanobeads past the ever-vigilant immune system.

They have developed membrane protein called CD47, which is recognized by macrophages as being safe, and let it pass through. Basically, they give the drug-bearing a badge which your body’s security system recognizes as safe. Biophysicist Dennis Discher, who led the work, says that he was inspired when he saw another group’s work describing the structure of CD47:

Neil Barclay of the University of Oxford, UK worked on the project that inspired Discher, and he was quite interested in the results:

“It’s neat,” he says of Discher’s research. “It’s a new way of trying to get the immune system to prevent phagocytosis of drugs or particles.”

While these are merely the early stages of the research, Discher is confident:

“We want to make this accessible and reproducible,” he says.