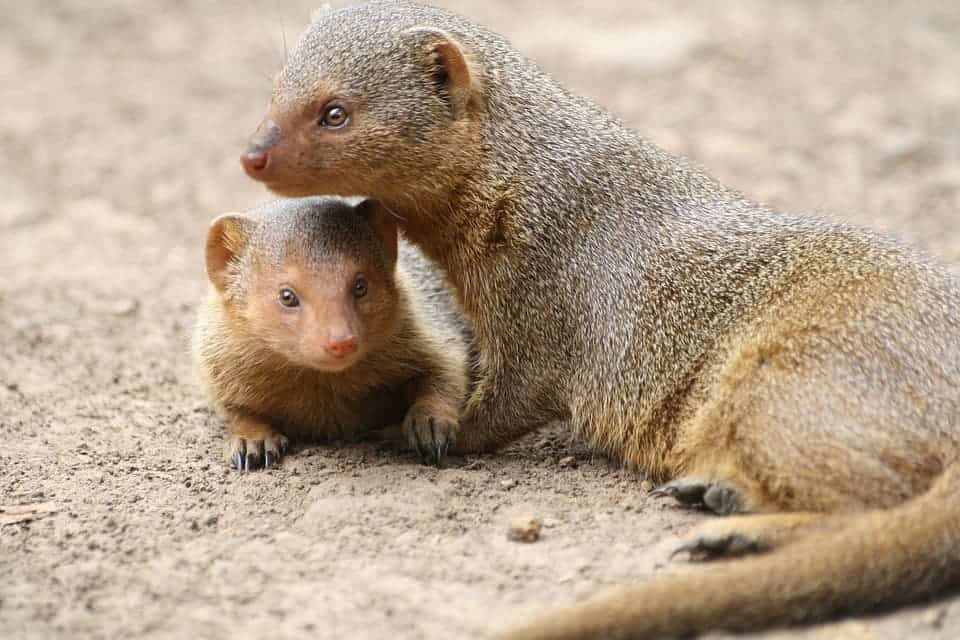 Banded mongooses (Mungos mungo) do something quite unusual — and very cool in my view — with their kids. Each baby mongoose is given over to an adult (who is not its parent) who will constantly care for and educate the youngling. These adults are known as the “escort”. Escorts carry, groom, and protect the pups from any would-be threat. The pups, in turn, inherit lifelong habits and behavioral traits, such as specific quirks of diet or habit, from the escort.

This strategy seems to pay off big, a new study reports. The “silver spoon” effect of escorts can give the pups a lifelong advantage in survival and reproductive success.

The study was carried out by an international team with members from the University of Exeter,  the University of Helsinki, and the University of Roehampton. Together, the researchers showed that the level and quality of care mongooses receive in their first three months of life play a key role in their success later on. The study focused on both the immediate and lifelong benefits that banded mongooses gain from their adopted role models, by studying a 17-year dataset.

The team reports that even pups born in the same litter have wildly-different paths in life. Pups that spent all day with their escorts grew to be heavier by the time of sexual maturity than those who did not. This is associated with higher reproductive success, the team notes. Female pups seem to benefit the most from quality care, seeing the largest impact on their reproductive success over the effect of larger size itself, the team explains. The headstart these pups receive in life also means that their offspring are, in turn, healthier — the silver spoon, so to speak, gets passed down from generation to generation.

Pups that were left to fend for themselves, or mostly for themselves, were at a comparative disadvantage to their peers, both in terms of personal fitness and health (as indicated by overall body weight) and reproductive success.

The findings offer insight into how helping behavior shapes the life of social mammals including humans the team reports. It also showcases the evolutionary advantages that cooperative family groups — in which offspring are cared for by helpers as well as their parents — bring to the table.

“Our study shows that the impacts of early life care extend well past the initial caring period,” says co-author Michael Cant, a Professor at the Centre for Ecology and Conservation on the University of Exeter’s Penryn Campus in Cornwall.

“As humans are also very sensitive to early life conditions, these ‘durable benefits’ of cooperation may have played an important role in shaping the development, health, and life history of our own species.”

The mechanisms driving some organisms to adopt altruistic behavior is explained by the theory of kin selection. We, too, hold this type of behavior in high regard across cultural divides. Cooperative species, like mongooses, all pitch in raising offspring, even those that aren’t their own in order to boost the fitness of their relatives — this, in turn, helps solidify their bloodline and, indirectly, their genes, over time.

The present study is interesting because it looks at the effects of kin-selection behaviors over an individual’s entire lifetime. Previous studies have predominantly focused on short-term effects.

“We know that care and resources received early on in life have profound effects on health and wellbeing in humans. Our study shows that also in mongooses, these early differences accumulate, with bigger pups receiving more care and doing better overall,” says lead author Dr. Emma Vitikainen from the University of Helsinki, Finland.

The paper “Live long and prosper: durable benefits of early-life care in banded mongooses,” has been published in the journal Philosophical Transactions B.