Is size all there is to it? As far as the brain is concerned, a recent study that assessed corvid intelligence suggests the answer seems no. The researchers found crows, ravens and other corvids score the same on an important cognitive test as the big-brained chimps. 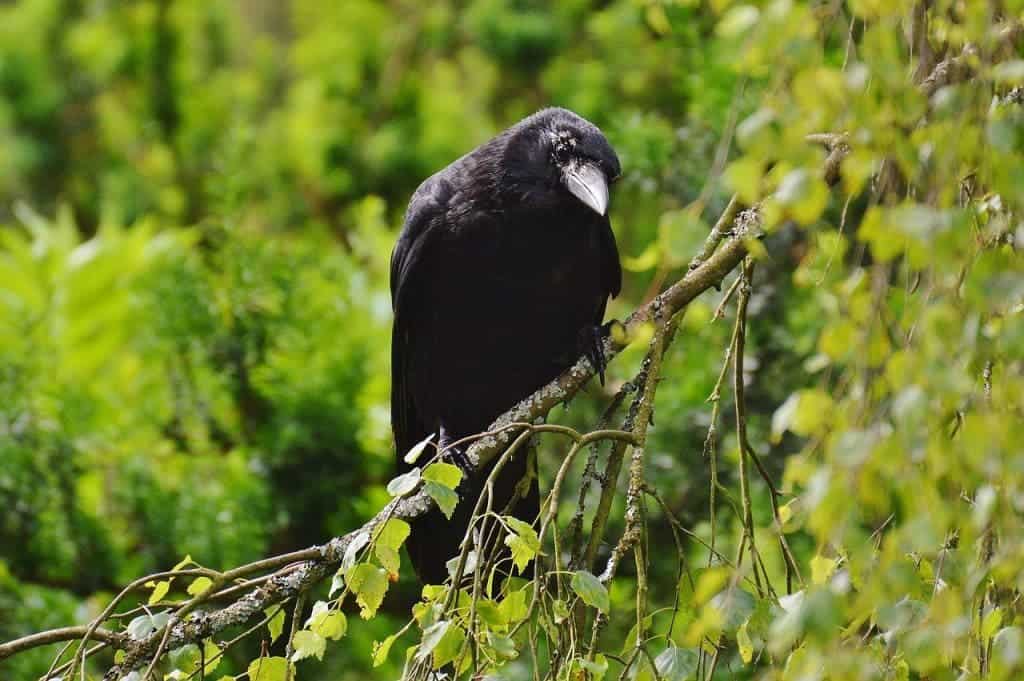 It’s not flattering to call someone ‘bird-brained’, but if that bird is a raven I might just take it as a compliment. Corvids have among the largest brains of any birds as well as a relatively high number of brain cells. Time and time again, researchers have been baffled by their ingenuity, cleverness, and wittiness.

Previously, scientists tasked ravens to reach a hanging piece of food by pulling up a bit of the string, anchoring it with its claw, and repeating until the food was in reach. Many ravens got the food on the first try, some within 30 seconds. In the wild, ravens have pushed rocks on people to keep them from climbing to their nests, stolen fish by pulling a fishermen’s line out of ice holes, and played dead beside a beaver carcass to scare other ravens away from a delicious feast. Ravens can imitate people or use gestures to point out things and communicate. They can also tell if someone’s looking at them or not.

The latest cognitive test for corvids was made by researchers at the University of Oxford, Max Planck Institute for Ornithology, and Lund University. The test is known as the “cylinder task” and is meant to assess higher intelligence.

Think of a cylinder with both ends opened. To reach inside and grab a reward, say a piece of rotten meat ravens love so much, you just have to go through either one. Now, what if the cylinder was transparent? The obvious thing you do is go straight for the reward because it’s faster than going around the cylinder. The problem is you’ll smash your beak or hands in a piece of plastic.

Understanding that you need to take an alternate route where you can succeed, despite taking longer, is a hallmark of intelligence. It means you have a brain that’s capable of making decisions based on spatial and temporal dimensions. It means you understand the meaning of time and its value, so you assert self-control — and not that many creatures can. In fact, in a similar test on humans known as the ‘marshmallow test’, those kids that resisted the temptation to grab a marshmallow, after being told they would get more if they wait, were found to be more successful in adulthood than their less restrained peers.

When ravens, jackdaws, and New Caledonian were presented with this task, they performed on par with apes. This is despite having much smaller brains, both in absolute and relative to body size terms. Ravens, at least, scored exactly the same as chimps.

“The Corvus species performed on a similar level to the great apes, despite vastly smaller absolute brain sizes. A chimpanzee brain is roughly 26 times larger than a raven’s; nevertheless, both species achieve 100% success. The jackdaws were more successful than either the bonobos or gorillas, despite a brain 70–94 times smaller. Clearly, absolute brain size is no overall predictor of motor self-regulation across a wider range of animal taxa,” the researchers write in their paper.

To be fair, there is a pattern that associates brain size relative to body size and higher cognition. Previously, scientists showed that carnivores with the  highest brain/body size ratio were better at solving a problem they had never seen before. But brain size might only be one piece of the puzzle. In the case of ravens and, why not, humans size might not be all that matters. Instead, it may be the case that both the number of neurons and number of connections play a major role. Take the human brain. There are numerous animals whose brain volume is similar to us, however the number of connections in the human brain far exceed anything we’ve seen thanks to “packaging” in the signature walnut shape.