Despite having brains that are still “under construction”, babies are able, even three months before full term, to distinguish between different syllables. 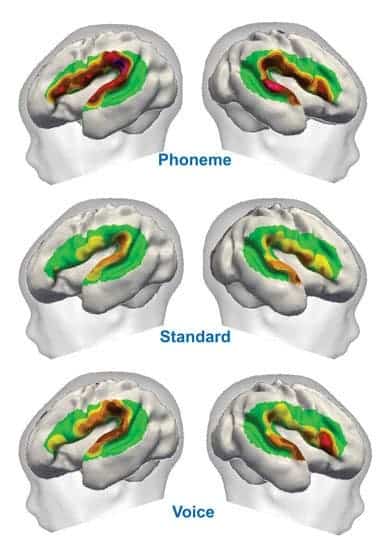 It was recently shown that full born babies, even just a few days after they are born, display remarkable linguistic sophistication: they can distinguish between two different languages [1], they can recognizes their mother’s voice[2], and they can remember stories they were told while in the womb [3]. But researchers started wondering, just how much of this ability is innate, and just how much comes after birth?

To answer that question, neuroscientist Fabrice Wallois of the University of Picardy Jules Verne in Amiens, France took a peek at what happens inside a baby’s head before he is born. As you can guess though, it’s quite hard to study fetuses, so they turned to the next best thing: 2-3 months old babies. The thing is, when you’re 2-3 months, old neurons are still migrating to their final destinations, and the basic connections between upper brain areas are just shaping up.

Researchers played a soft voice recording to premature babies while they were asleep in their incubators a few days after birth, then monitored their brain (of course, using a non-invasive technique). They were looking for any sign that the baby understands what’s happening in the recording, like for example, when a male voice says something after a long period in which a female voice talked.

The babies always distinguished between male and female voices, as well as between the trickier sounds ‘ga’ and ‘ba’, which demands even faster processing. Interestingly enough, in the process, they were using the same parts of the cortex which adults use for sophisticated understanding of speech and language.

The results further showed that linguistic connections inside the cortex are already “present and functional” and are not formed as a result of “outside-the-womb” practice; this clearly suggests that at least part of these speech-processing abilities is innate. However, the “innate” issue is still a matter of debate:

“It is possible that the experience of birth triggers a set of processes that prime the brain of a premature infant to respond to language in ways that a same-aged fetus will not.”, added