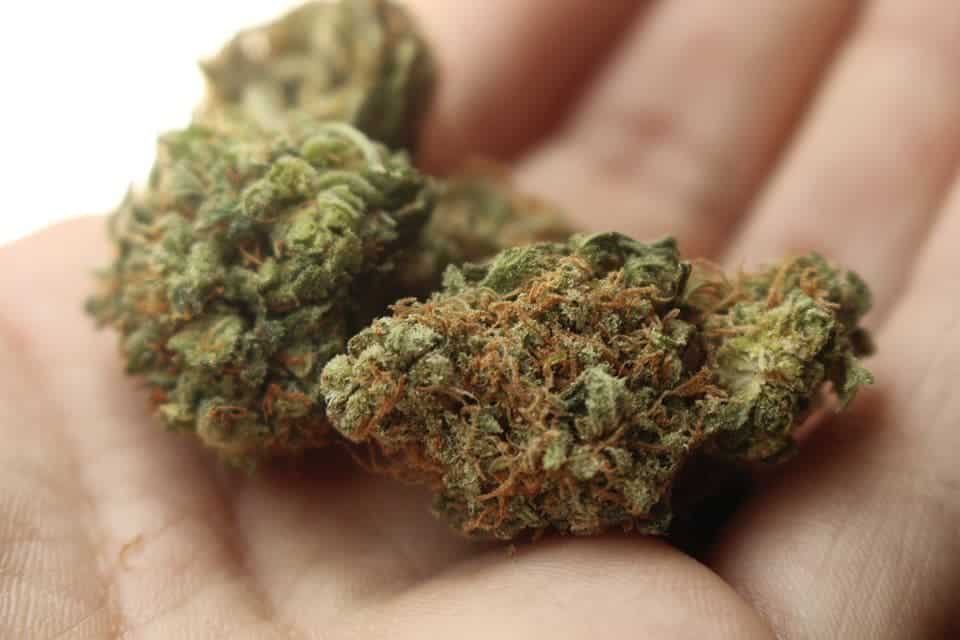 One highly cited argument against the legalization of recreational marijuana is that this would spike use among teens. According to the latest figures released by the National Survey on Drug Use and Health (NSDUH), only 6.5 percent of individuals aged 12-17 use marijuana on a monthly basis, the lowest point since 1994.

An estimated 24 million Americans aged 12 or older in 2016 were current users of marijuana, or 8.9 percent of the United States’ population in this age group. Overall, more Americans use cannabis than anytime between 2002 to 2015. According to the NSDUH, this upward trend is to a larger extent due to increased use among adults aged 26 or older and, to a lesser extent, the increase in marijuana use among young adults aged 18 to 25. 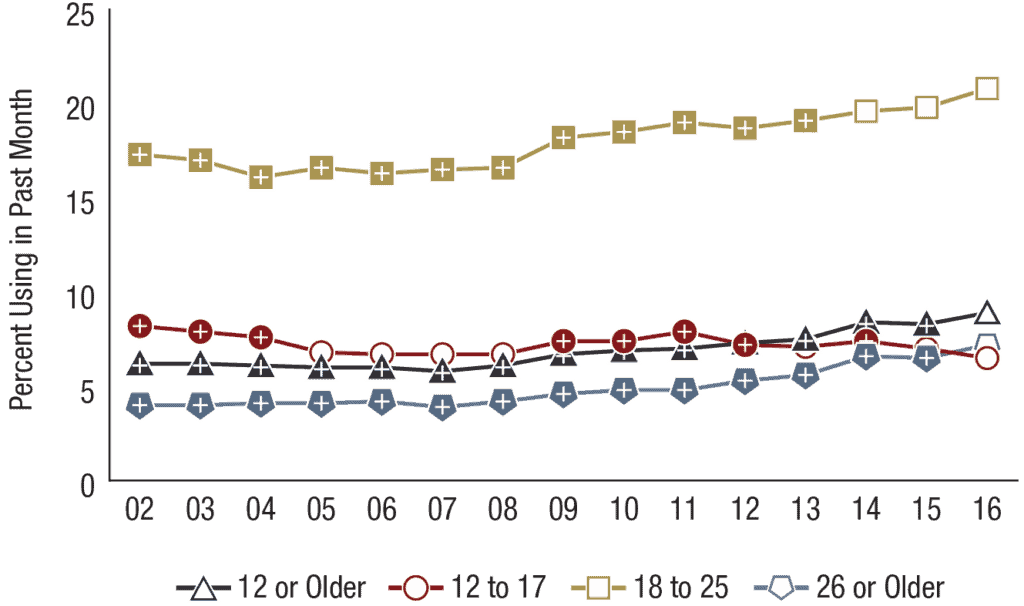 Nearly 21 percent of Americans between 18 and 25 use marijuana at least once a month, while monthly usage is reported to be 14.5 percent among adults aged 26 to 34. At the same time, alcohol use has declined among the same age groups suggesting American adults are replacing liquor with herb.

Teens are less interested in both marijuana and alcohol

The percentage of underage individuals who reported current alcohol use in 2016 was lower than the percentages in 2002 through 2014. Despite these declines over time, about 1 in 5 individuals aged 12 to 20 in 2016 drank alcohol in the past month. 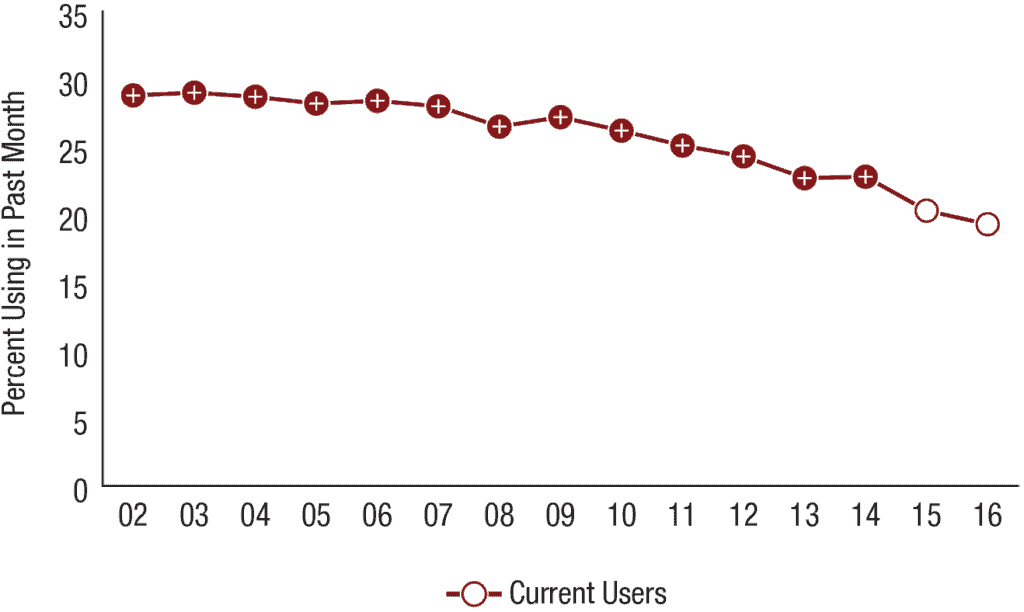 As for teens, the percentage of adolescents in 2016 who were current marijuana users was lower than the percentages in most years from 2009 to 2014, but it was similar to the percentage in 2015. The recreational psychoactive drug seems to have fallen out of favor among teens, with use on a downward trend since 2002, even though many recreational shops opened around the country in 2014. In 2002, 8.2 percent of teens used marijuana on a monthly basis. Overall, the current trendline suggests teens are less interested in cannabis regardless of whether it’s legal or not.

In 1996, California became the very first state in the country to legalize medical marijuana. Twenty years later, there are now a total of 29 states — and Washington, D.C. — that allow the use of marijuana for medical purposes, and of those, eight and the District also allow recreational use for adults. 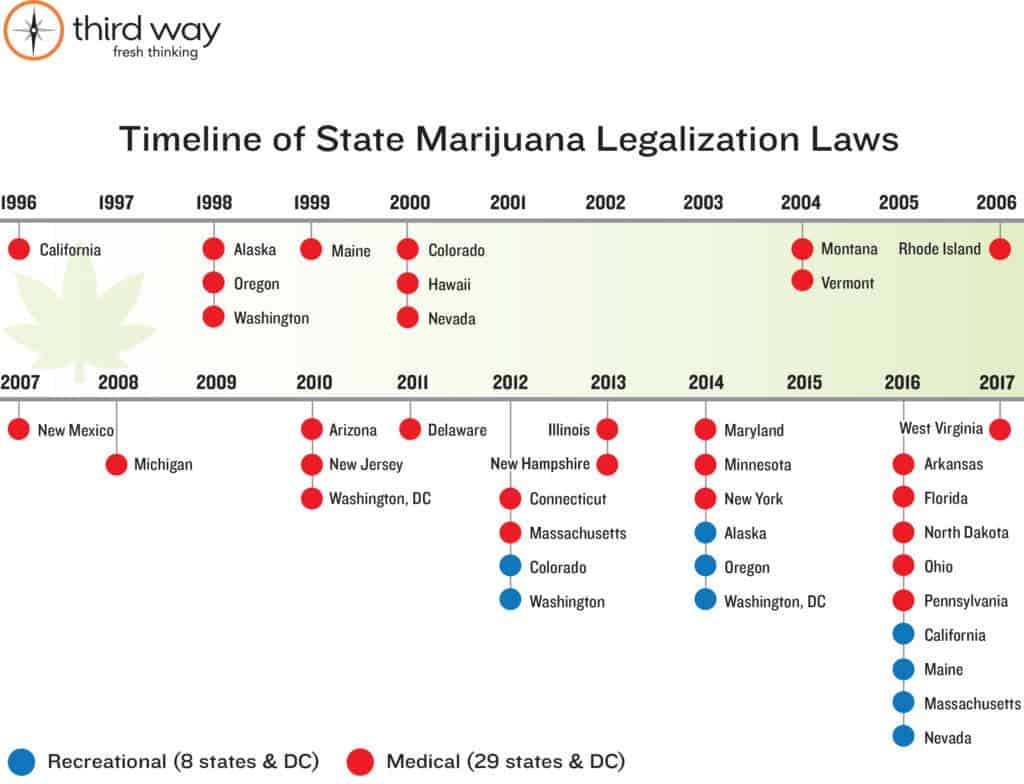 These are encouraging results, since teens seem to be the only vulnerable age group to the potentially damaging effects of cannabis use. Studies have shown that heavy marijuana consumption among teens can damage the brain (specifically grey matter), causing cognitive decline, poor attention and memory, and decreased IQ. Heavy marijuana users among adults can lead to poor memory and abnormal brain structure, but effects are not nearly as pronounced as those in teens that may linger into adulthood.

“It needs to be emphasized that regular cannabis use, which we consider once a week, is not safe and may result in addiction and neurocognitive damage, especially in youth,” said Krista Lisdahl, PhD, director of the brain imaging and neuropsychology lab at University of Wisconsin-Milwaukee.