Imaging the fine and intricate structures of blood vessels in the human body is paramount to modern anatomy. By knowing the body in greater detail, scientists are able to devise better treatments. Conventional imaging, however, is limited in how far it can peer through blood vessels. This may be set to change for the better after Chinese researchers have found an unconventional way to X-ray image blood vessels with unprecedented detail: filling the blood with liquid metal.

[ALSO READ] Scientists engineer heart that beats on its own

A heart of metal

Typically, blood vessels are imaged by means of X-ray tomography, which produces strikingly beautiful 3D pictures of the heart hard at work. For it to work nicely, the X-rays need to be absorbed more aggressively, so a contrast agent that  absorbs X-rays more than the surrounding tissue is pumped in the heart. Usually, this contrast agent is iodine, which has a high electron density. Some other fluids, denser (these produce the most effective tomography) or otherwise, are also being used. Seems like everybody’s been missing the obvious, though: using a metal.

Researchers at Tsinghua University in Beijing  used gallium as a contrast agent – a metal which melts at about 29 degrees centigrade and so is liquid at body temperature.  What makes it perfect for the job, however, is that it’s chemical stable and doesn’t react with water. This way it flows easily even through the thinnest blood vessels.

The image below shows two pig hearts, one injected with liquid gallium (left) and the other with a standard iodine-based contrast agent. The differences are striking – even capillaries with a diameter of only 0.07 millimetres can be seen. The researchers boast that using higher resolution techniques, even smaller blood vessels can be imaged. 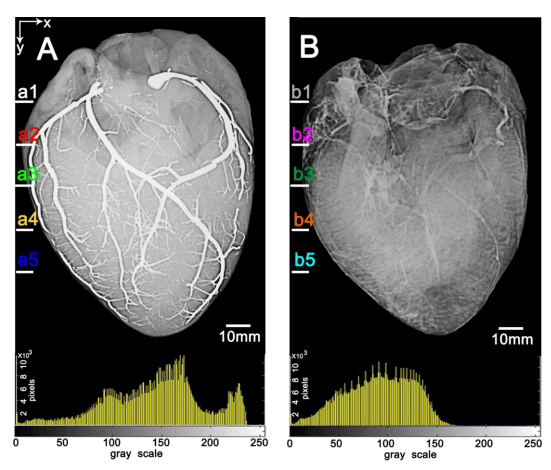 “The capillaries that used to be hardly detectable are now easily seen on the image with outstanding clarity,” the authors write.

Injecting metals in the heart doesn’t sound like the safest job in the world. In truth, gallium at this temperature is chemically inert and isn’t toxic for humans. Pumping out the metal is easy and doesn’t leave residues. More tests are required before any clinical trials are made. Soon enough, by the likes of it, we’ll have a new sharp look at the human body.