We seem to be losing the war on elephant poachers, but a new toolset that involves tracing slaughter hotspots in Africa based on DNA taken from ivory might be exactly what law enforcement needed all these years. This way, researchers at University of Washington, in collaboration with INTERPOL, found that most of the ivory seized since 2006 originates in just two areas. 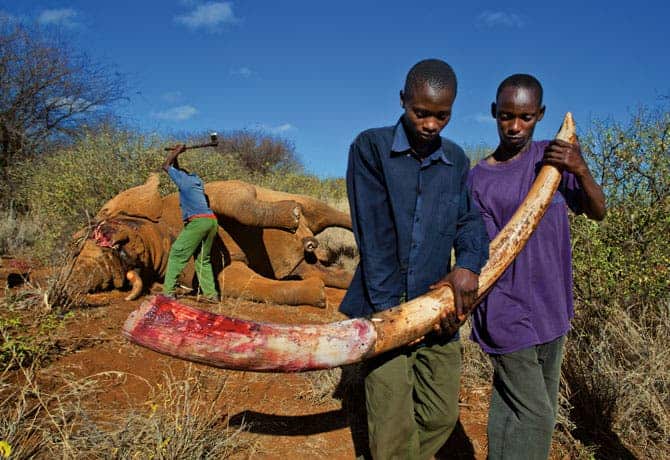 To keep the ivory from the black market, a plainclothes ranger hacks the tusks off a bull elephant killed illegally in Kenya’s Amboseli National Park. In the first half of this year six park rangers died protecting Kenya’s elephants; meanwhile, rangers killed 23 poachers. Photograph by Brent Stirton

Since some  portions of genetic material are known to be held only by elephants in specific geographic areas, DNA can be effectively used to locate where samples come from. In this case, the researchers analyzed about a half-ton of ivory confiscated in Africa and Asia between 1996 and 2014  and found more than 85 percent of forest elephant ivory seized since 2006 could be traced back to an area that spans northeastern Gabon, northwestern Republic of Congo, southeastern Cameroon and the southwestern Central African Republic. About 85 percent of ivory that came from savannah elephants, the larger of the two African elephant subspecies, could be traced back to southeastern Tanzania and northern Mozambique. 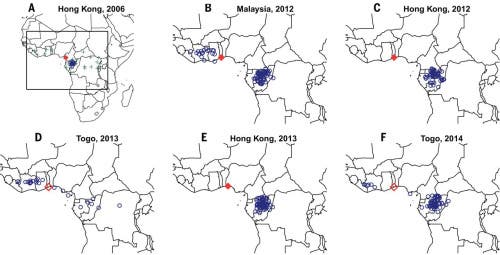 Forest elephant seizures from 2006-2014 were largely assigned to the TRIDOM in NE Gabon, NW Congo-Brazzaville and SE Cameroon and neighboring Dzanga Sanga in SW CAR.

Between 2010 and 2012, some 100,00 African elephants have been poached to source their precious ivory. Most it ends up on the Chinese black market, and as the country’s wealthy populace has soared in the past couple of years, so has the blood trade.  In 2013, estimates suggest some 50,000 elephants were killed. Considering there are only about 450,000 elephants left this means  one year’s killing spree at more than 11 percent of all African elephants left on earth. At this rate, in just a couple of decades there might not be any more wild elephants – not enough to make conservation efforts sustainable. 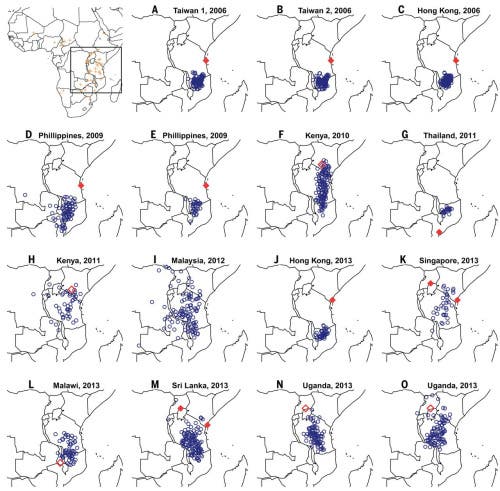 Savanna elephant seizures from 2006-2014 were largely assigned to SE Tanzania and adjacent northern Mozambique, but eventually shifted northward within Tanzania.

“When you’re losing a tenth of the population a year, you have to do something more urgent – nail down where the major killing is happening and stop it at the source,” Wasser said. “Hopefully our results will force the primary source countries to accept more responsibility for their part in this illegal trade, encourage the international community to work closely with these countries to contain the poaching, and these actions will choke the criminal networks that enable this transnational organized crime to operate.”

Armed with this valuable information, local and international law enforcement might want to concentrate their efforts in these key areas and improve security. What’s interesting is that this technique can be extended to other highly poached animals, like rhinos. It’s an uphill battle, though. Priced at $2,000 per kilo, ivory is a prized commodity and many poor locals are willing to take their chances and even risk losing their lives. The poachers are very organized and often act in cahoots with local authorities which they bribe or share spoils.