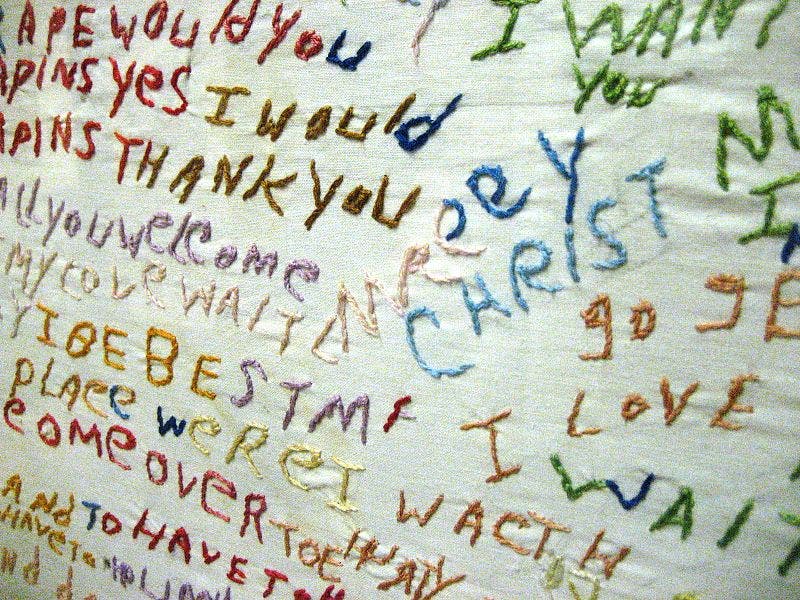 Cloth embroidered by a schizophrenia sufferer. Image via Wiki Commons

A new study concluded that schizophrenia isn’t a single disease, but rather a group of eight genetically distinct disorders, each with its own set of symptoms, and likely, its own treatment. The study could be the first step in finally understanding the condition and how it can be dealt with.

Currently, schizophrenia is thought of as a complex mental disorder, often associated with abnormal social behavior and failure to recognize what is real. Common symptoms include false beliefs, unclear or confused thinking, auditory hallucinations, reduced social engagement and emotional expression, and inactivity. The main difficulty in treating it is the huge variety in symptoms. If we’d be dealing with eight distinct diseases as opposed to just one, that would make a lot more sense.

Igor Zwir, PhD, one of the senior investigators, helped match precise DNA variations in people with and without schizophrenia to symptoms in individual patients. Image: Robert Boston.

This recent study, conducted at the University of Washington concludes just that: distinct gene clusters that contribute to eight different classes of schizophrenia. They analyzed the genes of over 4,000 people with schizophrenia:

“Genes don’t operate by themselves,” said C. Robert Cloninger, MD, PhD, one of the study’s senior investigators. “They function in concert much like an orchestra, and to understand how they’re working, you have to know not just who the members of the orchestra are but how they interact.”

Cloninger, the Wallace Renard Professor of Psychiatry and Genetics, and his colleagues matched precise DNA variations in people with and without schizophrenia to symptoms; in total, they analyzed over 700,000 genetic places where changes had occurred. The results were pretty clear.

For example, patients with symptoms such as hallucinations or delusions had a different type of genetic modification than those with impaired speech and behavior. The first group genetic variations interacted to create a 95 percent certainty of schizophrenia, while in the second group, there was a 100 percent change of genetic interaction leading to schizophrenia.

“What we’ve done here, after a decade of frustration in the field of psychiatric genetics, is identify the way genes interact with each other, how the ‘orchestra’ is either harmonious and leads to health, or disorganized in ways that lead to distinct classes of schizophrenia,” Cloninger said.

Most individual genes can’t be associated with schizophrenia at all, but when you start to think at a larger scale and analyzed gene clusters, you end up with a certainty between 70 and 100 percent.

“In the past, scientists had been looking for associations between individual genes and schizophrenia,” explained Dragan Svrakic, PhD, MD, a co-investigator and a professor of psychiatry at Washington University. “When one study would identify an association, no one else could replicate it. What was missing was the idea that these genes don’t act independently. They work in concert to disrupt the brain’s structure and function, and that results in the illness.”

By identifying different groups of genetic variation and classifying them in a genetic database, we can enter a new age of schizophrenia treatment, directly treating the pathogens which cause schizophrenia in the first place.