Researchers at the Max Planck Institute of Immunobiology and Epigenetics (MPI-IE)  re-activated the expression of an ancient gene in mice. To their surprise, the gene in question which is dormant in all mammalian species caused the mice to develop  fish-like thymus. The thymus is an organ of paramount importance to the adaptive immune system, but in this particular instance, the thymus produced not only T cells, but also served as a maturation site for B cells – a property normally seen only in the thymus of fish. So, what we’re seeing is a resetting of the immune system to a state similar to what it was like 500 million years ago, when the very first vertebrates began to emerge. By closely following how these gene works, the scientists hope to build a model that will explain how the thymus evolved during the past hundreds of millions of years.

T-cells are a type of white blood cell that circulate around our bodies, scanning for cellular abnormalities and infections, and are essential to human immunity. These are matured by the epithelial cells in the thymus, but genetically-wise it’s the FOX1 gene that triggers their development. FOX1’s evolutionary ancestor is FOX4, an ancient gene that lies dormant in most vertebrates except jawed fish, such as cat sharks and zebra fish.

The team led by Thomas Boehm, director at the MPI-IE and head of the department for developmental immunology, activated FOX4 in mice. When both FOX1 and FOX4 are simultaneously activated, the researchers found the mouse thymus exhibited properties similar to those found in a fish. Coupled with previous findings, the results suggest that that thymus as we know it today in most vertebrates evolved from and was prompted by the FOX4 gene.  Through  an evolutionary gene duplication FOX1 was born. Initially  both genes must have been active, until finally only FOXN1 was active in the thymus. 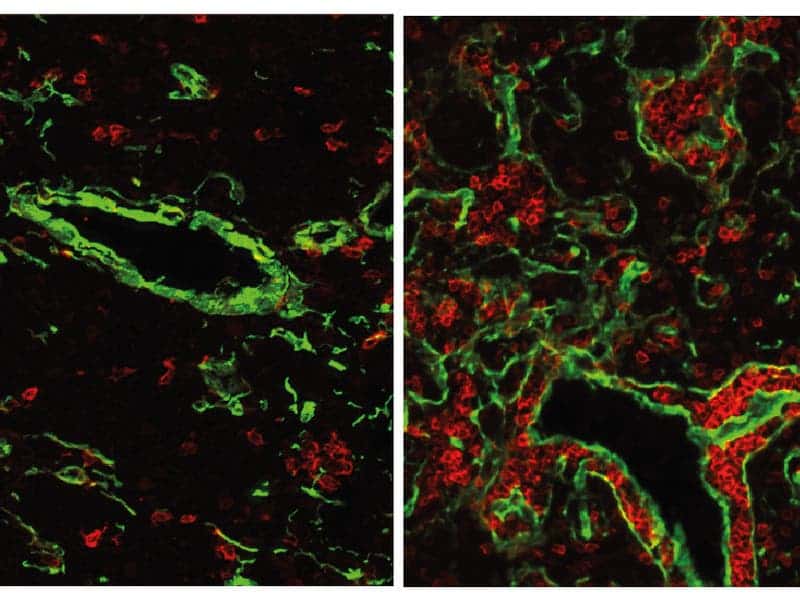 The normal mouse thymus (left) contains only a small fraction of B-cells (red). If the gene FOXN4 is activated, a fish-like thymus with many B-cells develops. Image: Max Planck

A surprising find was that not only T-cells developed in the thymus of the mice, but also B-cells. Mature B-cells are responsible for antibody production. In mammals, they normally do not mature in the thymus, but in other organs, such as the bone marrow.

Boehm says that it’s not yet clear whether the B-cell development is based on the migration of dedicated B-cell precursors to the thymus, or to maturation from a shared T/B progenitor in the thymus itself.  Nevertheless, it’s remarkable how the researchers have uncovered a particular evolutionary innovation that occurred in an extinct species. Retracting evolutionary steps in our collective ancestral background might provide insights we dare not dream of.

One thought on “Resetting the immune system back 500 million years”