Exactly 50 years ago, Cambridge researchers Watson and Crick published a monumental paper that for the first time described the intertwined double helix DNA structure which carries the fundamental genetic code for life. The discovery led to an explosion of advancements in the fields of genetics and health, but also in chemistry or computing. Now, researchers, coincidentally or not from the same Cambridge University, have proven that a quadruple helix structure, first discovered some ten years ago, does in fact also exist in human cells. 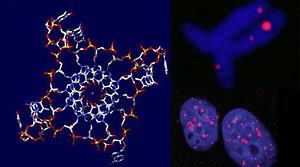 These rather peculiar DNA structures are called G-quadruplexes, since they form in regions of DNA that are rich in the building block guanine. For over ten years, scientists have been able to replicate the quadruple helix in lab tubes, but only recently did they show that these can found in living human cells too, after they arrived at the end of their research stream from hypothetical model, to computer simulation to human cell identification.

The scientists generated antibody proteins, based on previous research, that detect and bind to areas in a human genome rich in quadruplex-structured DNA. Rather ingeniously, these proteins were also tagged  with a florescence marker so the emergence of the structures in the cell could be tracked and imaged, similar to how modern biopsy-bypass techniques employ florescence markers to image cancer cells.

While quadruplex DNA is found fairly consistently throughout the genome of human cells and their division cycles, a marked increase was shown when the fluorescent staining grew more intense during the ‘s-phase’ — the point in a cell cycle where DNA replicates before the cell divides.

“We are seeing links between trapping the quadruplexes with molecules and the ability to stop cells dividing, which is hugely exciting,” said Professor Shankar Balasubramanian from the University of Cambridge’s Department of Chemistry and Cambridge Research Institute, whose group produced the research.

“The research indicates that quadruplexes are more likely to occur in genes of cells that are rapidly dividing, such as cancer cells. For us, it strongly supports a new paradigm to be investigated — using these four-stranded structures as targets for personalised treatments in the future.”

Findings were published in the journal Nature Chemistry.