Though Siberia stretches across about 10% of the world’s land surface, it’s only occupied by 0.5% of the world’s population, which isn’t too hard to explain why. Recent temperature measurements read on average -25°C for the month of January, but it’s not unheard of to experience temperatures below -40°C. Extreme weather, temperatures and terrain, however, call for extreme humans, and who better than nature to shape the local population for survival? 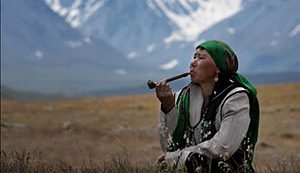 Recently, a team of researchers at  University of Cambridge, working in close collaboration with researchers from the  Institute of Biological Problems of the North in Magadan, Russia, have performed the most extensive genetic survey in Siberia, analyzing genetic variants from ten groups that represent nearly all of the region’s native populations.

Their findings suggest specific genes helped  humans who have been living in Siberia for 25,000 years cope with the extreme cold. Three genes – UCP1, ENPP7 and PRKG1, – were found to have undergone positive natural selection, based on specific techniques the scientists used to identify the genetic traits favored by evolution.

In a previous 2010 study authored by University of Chicago geneticist Anna Di Rienzo and her colleagues, only two Siberian populations were studied, still two genes were identified as being more active UCP1 and UCP3. These two gene help the body transform body fat directly into heat, without going through an intermediary step that transforms it into chemical energy first.

The other two genes ENPP7 and PRKG1 identified in the present study were also found to offer significant advantages to the Siberian natives. PRKG1 is involved in the contraction of smooth muscle, key to shivering and the constriction of blood vessels to avoid heat loss. ENPP7 is implicated in the metabolism of fats –  a great genetic trait considering the mostly fat-laden diets of the local populace comprised mostly of meat and dairy products.

Since this was an extensive study where more than 200 DNA samples from native groups spread through out Siberia, naturally some genes were expressed more in some groups than in others, which is why the University of Chicago might have missed a few in the first place. Thus selection for UCP1 was strongest in southern Siberian groups, while selection for PRKG1 was greatest in northeastern and central Siberia. ENPP7, on the other hand, showed strong selection throughout Siberia.

Evolution never sleeps and is a constant process. These latest findings serve as a reminder.

“The results are fascinating,” says Danae Dodge, a geneticist at the University of Sheffield in the United Kingdom, because they add to evidence that “we have continued to evolve in our modern world.”