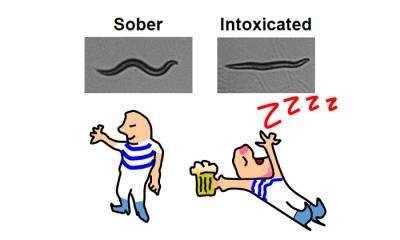 Scientists have grown mutated worms that don’t get drunk. mage courtesy of Jon Pierce-Shimomura of The University of Texas at Austin.

An unlikely worm might help millions of people fighting alcohol addiction. No, you won’t find it in tequila, but in the labs of neuroscientists at University of Texas at Austin who have engineered  Caenorhabditis elegans – one of the most popular animal models in science – to become insensitive to alcohol intoxication. The findings, if replicated on mice and then humans in clinical trials via a drug, could help devise treatments for  people going through alcohol withdrawal.

The researchers achieved this feat by inserting a modified human alcohol target – any neuronal molecule that binds alcohol. The target in question was a neuronal channel called the BK channel, regulates many important functions including activity of neurons, blood vessels, the respiratory tract and bladder. However, the mutation only causes alcohol insensitivity and preserves all the other vital functions.

“This is the first example of altering a human alcohol target to prevent intoxication in an animal,” says corresponding author, Jon Pierce-Shimomura, assistant professor in the university’s College of Natural Sciences and Waggoner Center for Alcohol and Addiction Research.

“We got pretty lucky and found a way to make the channel insensitive to alcohol without affecting its normal function,” says Pierce-Shimomura.

To find this target, Pierce-Shimomura and his team proceeded largely by trial-and-error.  Eventually, they stumbled upon a genetic modification of the channel that stopped it from activating in the presence of ethanol.

“We tried a brute force approach, testing hundreds of mutations to empirically determine which one would allow the BK channel to function normally [while still] preventing alcohol from activating it.”

Now you can’t get drunk. Is that a good thing?

How does a drunk worm look like in the first place? Well, when C. elegans has more than it can handle, it slows its crawling and moves less from side to side. The worm also stops laying eggs, which builds up in their bodies and thus proved to be a great marker to assess whether or not the mutation worked. Even so, alcohol is a very tricky chemical. Unlike other drugs like cocaine that works its magic on specific regions of the brain, alcohol seems to be all over the place, targeting many regions of the brain with various effects on the body. As such, various other aspects of alcohol addiction, such as tolerance, craving and the symptoms of withdrawal, may be influenced by different alcohol targets.

Will we get to see a drug in the future the kind James Bond uses to drink his enemies under the table soon? Maybe, maybe not. The researchers first need to investigate the findings further by replicating the experiment in mice, which are far more complex organisms than worms. If such a drug worked on humans too, and with manageable side effects (mutated alcohol targets might cause some serious backfiring considering they’re involved in other important bodily functions), then it could become a serious tool for curving alcohol addiction.

“Our findings provide exciting evidence that future pharmaceuticals might aim at this portion of the alcohol target to prevent problems in alcohol abuse disorders,” says Pierce-Shimomura. “However, it remains to be seen which aspects of these disorders would benefit.”

The findings were reported in The Journal of Neuroscience.