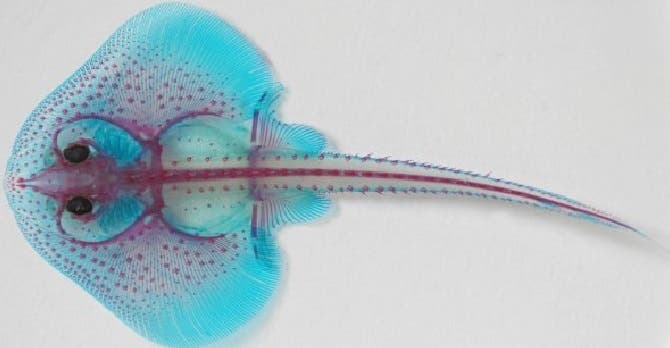 In 1878, German anatomist Karl Gegenbaur proposed an evolutionary link between the gills of cartilaginous fish (such as skates and sharks) and the limbs of vertebrates. The idea was popular for a short bit, but was then generally discarded due to the lack of supporting evidence in the fossil record. However, support may come in the form of a genetic study – specifically, something called the Sonic hedgehog gene.

The Sonic hedgehog gene makes sure all your limbs are in the right place and have the right size. It dictates how the limbs will grow, maintaining the right direction for the skeleton growth. In cartilaginous fish, the gills are protected by flaps of skin supported by arches of cartilage. Interestingly, the purpose of the Sonic hedgehog gene plays the same role for the fish, directing the growth of gills and cartilage. This could indicate that the gene’s function remained unchanged across millions of years of evolution. Writing in this week’s edition of the journal Development, MBL scientist Andrew Gillis and his colleagues support this idea:

“Gegenbaur looked at the way that these branchial rays connect to the gill arches and noticed that it looks very similar to the way that the fin and limb skeleton articulates with the shoulder. The branchial rays extend like a series of fingers down the side of a shark gill arch,” said Andrew Gillis, who led the research, in a statement. “The fact that the Sonic hedgehog gene performs the same two functions in the development of gill arches and branchial rays in skate embryos as it does in the development of limbs in mammal embryos may help explain how Gegenbaur arrived at his controversial theory on the origin of fins and limbs.”

“Taken to the extreme, these experiments could be interpreted as evidence that limbs share a genetic programme with gill arches because fins and limbs evolved by transformation of a gill arch in an ancestral vertebrate, as proposed by Gegenbaur,” Gillis said.

“However, it could also be that these structures evolved separately, but re-used the same pre-existing genetic programme. Without fossil evidence this remains a bit of a mystery — there is a gap in the fossil record between species with no fins and then suddenly species with paired fins — so we can’t really be sure yet how paired appendages evolved.”

Of course, this is still a hotly debated claim. It doesn’t seem likely for this gene to develop separately, but the fossil evidence is still missing. Additional research is needed to fully compare the functions of the gene, but even if this is further confirmed, I doubt the theory will be widely accepted without fossil evidence. Unfortunately, this type of evidence can be difficult or impossible to find, so this will likely remain an open question for year to come. But the premise is there, and the prospect is certainly interesting.