Scientists have discovered an atypical gene that is thought to be crucial for the generation of new neurons in the brain, a process called neurogenesis. The discovery and further study of the gene might help scientists better understand how neurodegenerative diseases such as Alzheimer’s affect the brain and, in term, how to address them. 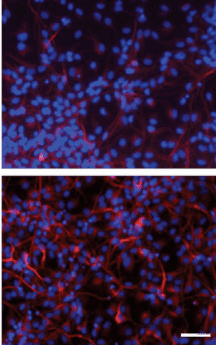 New neurons are born through a complex temporal and spatial control of hundreds of genes. The expression of these genes is controlled by regulatory networks, usually involving proteins, indispensable for the well functioning of the central nervous system. When one or some of these genes are inhibited or over expressed,  neurological disorders develop. Understanding the mechanisms that govern neurogenesis becomes thus of the utmost importance when developing treatments for such serious diseases.

A major breakthrough in this respect was recently made by scientists at A*STAR’s Genome Institute of Singapore (GIS), who discovered a key component within a gene regulatory network that controls the birth of new neurons, called RMST. This component isn’t a protein like most people, even the researchers involved in the study, thought. RMST is an atypical, long non-coding RNA, a newly discovered class of RNA whose functions remain largely unknown

In this latest study, one of the components in this new class has been at least demystified. They found that RMST acts directly within a gene regulatory network.

“Stanton and colleagues show how RMST, a human lncRNA, directly regulates SOX2, a key transcription factor protein that is instrumental for directing the birth of new neurons,” said Associate Prof Leonard Lipovich, from the Center for Molecular Medicine and Genetics at the Wayne State University and a member of GENCODE. Even more intriguingly, they highlight that RMST controls SOX2 by directly interacting with the protein.

Their work is important not only because it sheds light on the process of neurogenesis, but also new insight into how lncRNA works together with protein components to regulate the important biological processes of gene expression.

“The paper is therefore an important advance in the still nascent and controversial field of riboregulators, or RNAs that regulate proteins in our cells. DNA-binding proteins that turn genes on and off were traditionally thought to be distinct from RNA-binding proteins. Stanton et al, however, illuminate the cryptic, yet crucial, RNA-binding roles for DNA-binding transcription factors: lncRNAs just might be the definitive regulatory switch that controls these factors’ activity.”

Findings were reported in the journal Molecular Cell.