It’s estimated that humanity will have to produce around 50% more food than we currently do to keep up with growing global demand….by 2050. It’s an enormous challenge, especially as more and more countries face the effects of climate change, such as drought or toxic groundwater salinity levels. One of our best hopes is to rely more on crops that can flourish despite the vicissitudes of the environment, and plant cell biologists at the University of Oxford hope that their new breakthrough in climate-resilient agriculture will allow us to do just that. 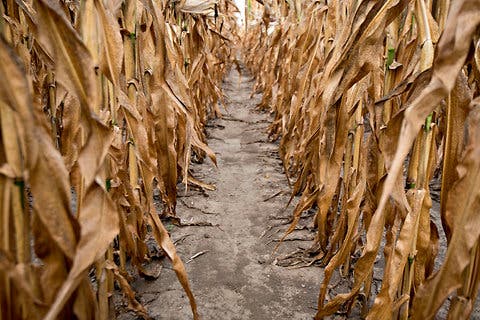 Though not a new field of research, Oxford’s study offers a new angle on the problem by looking at plant genetics for a way to make our crops sturdier in the face of wilder weather and more harsher climate. The team has discovered a gene that can be used to give plants in a laboratory setting more resilience, making them thrive instead of whither when unfavourable conditions strike. Their research has been published in the print edition of Current Biology.

The gene known as SP1 is found in all plants and plays a regulatory function in photosynthesis, controling the influx of proteins to the plant cells’ chloroplasts. When a plant becomes “stressed” from say, too much salt in the groundwater, the photosynthetic machinery bogs down.

“One of the undesirable consequences of too much photosynthesis under stressed conditions is the overproduction of toxic molecules called ‘reactive oxygen species’,” says Paul Jarvis, plant cell biologist at Oxford University, and author on the new paper.

This build up of toxins in the strained plant always leads to its untimely death, and withered plants make for poor harvests. To prevent this accumulation of toxins, photosynthesis must be slowed down during times of stress, and here is where the Oxford research hits home — the team found that they could modify the SP1 gene to reduce the flow of proteins to the chloroplasts.

“We found that if you alter the activity of SP1 you can modify the extent to which photosynthesis takes place,” Jarvis explains.

Together with his co-researcher Qihua Ling, a post-doctoral research associate at the university, Jarvis tested the theory by simulating conditions of high salinity and extreme dryness and noting how three groups of plants reacted in this environment: normal wild cress, cress engineered to lack SP1, and another engineered to over-express the gene.

“What we found was that the plants with high levels of SP1 were more tolerant of several different stresses,” Jarvis explains. Those SP-loaded plants photosynthesised less, produced fewer of the associated toxins under stress, and so were more resilient to environmental flux.

There’s a chance the plants may be trading photosynthesis for survival, potentially compromising their overall productivity. But SP1 functions in ways that aren’t fully understood yet, and it’s also possible that it might only intensify its responsiveness in times of stress, according to Jarvis. He also notes that there are viable ways of reducing this potential compromise — namely, engineering plants to express SP1 only when they’re under pressure.

Jarvis and his colleagues are now applying their discovery to other plants like tomatoes, brassica, wheat, and rice — the latter two especially, because they’re staple crops for billions globally. While the research is still at a preliminary stage, in the future it could form part of a toolbox that enables us to breed tougher, more climate-ready crops — a challenge of growing pertinence, as we face the looming threat of lowered yields.

“Food security is on everybody’s minds,” says Jarvis. “We have an issue with population growth, and we’re losing in the region of 50% of yields to consequences of stress. So with that backdrop, it becomes exciting if you can identify a gene that potentially could mitigate that loss.”